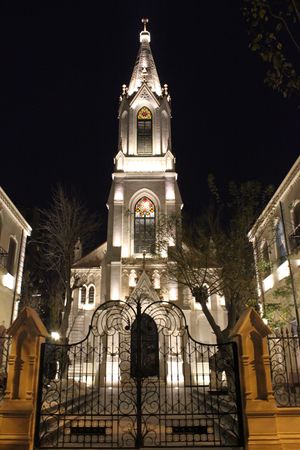 Church of the Saviour, a German church in Baku, Azerbaijan.

Caucasus Germans (German: Kaukasiendeutsche) are part of the German minority in Russia and the Soviet Union. They migrated to the Caucasus largely in the first half of the nineteenth century and settled in the North Caucasus, Georgia, Azerbaijan, Armenia, and in the region of Kars (present-day Turkey). In 1941, the majority of them were subject to deportation to Central Asia and Siberia during Joseph Stalin's population transfer in the Soviet Union.

The end of the Russo-Turkish War (1768–1774) ensured Russia's expansion into the Caucasus and created a need in populating these lands with Russian subjects in order to hasten its exploration. In the late eighteenth century the government permitted families of Volga Germans to settle in Kuban. However poor infrastructure, lack of organization of the officials responsible for the settlement, and the refusal of the military personnel to have these lands populated by non-Russians were an obstacle to steady and constant migration of the Germans. By the late 1840s there were five German colonies in the North Caucasus. The migration waves (especially to Don Voisko Province) grew beginning in the second half of the nineteenth century with the capitalist influence on farming in Russia. Germans would immigrate not only from the regions adjacent to the Volga River but also from the Black Sea region and Germany. By the time of the October Revolution, there were over 200 German colonies in the North Caucasus; of those over 100 were in Rostov Oblast, 60 in Stavropol Krai and around 20 in Krasnodar Krai. In 1942 more than 160,000 Germans were deported from these entities as well as from elsewhere in the North Caucasus and the Don region (Kabardino-Balkaria, Kalmykia, North Ossetia, Dagestan, and Checheno-Ingushetia).[1]

The majority of the Germans of this region adhered to various branches of Protestantism, most commonly Lutheranism, Mennonitism and Baptism. Roman Catholics formed a minority and lived in six colonies.[2] 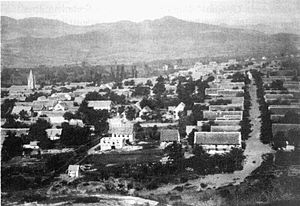 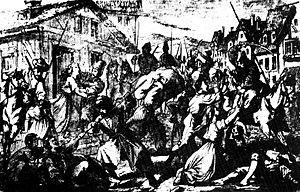 In 1815, while participating in the Congress of Vienna, Russian emperor Alexander I visited Stuttgart, a city in his mother's native Kingdom of Württemberg. Upon witnessing the oppression that local peasants were undergoing either due to belonging to different non-Lutheran Protestant sects or to their participation in separatist movements, he arranged for their settlement in Tiflis (Tbilisi) suburbs in order to form agricultural colonies. On September 21, 1818 the first German settlement in the South Caucasus, Marienfeld (near Tiflis, along the Kakhetia highway, now part of Sartichala), was established by a group of Swabian Germans. Two months later another group of colonists founded another settlement on the bank of the Asureti River and named it Elisabethtal, after the Emperor's wife Elisabeth Alexeievna (now Asureti in Kvemo Kartli). Within the next year five more colonies were established: New Tiflis (later Mikhailovsky Avenue, now part of Davit Aghmashenebeli Avenue in Tbilisi), Alexandersdorf on the left bank of the Kura (now the vicinity of Akaki Tsereteli Avenue in Tbilisi), Petersdorf (near Marienfeld, now part of Sartichala), and Katharinenfeld (now Bolnisi).[3] Three more colonies were founded in Abkhazia: Neudorf, Gnadenberg and Lindau.

From 1906 to 1922, Kurt von Kutschenbach published the German-language newspaper Kaukasische Post, that called itself the "only German newspaper in the Caucasus". Editor-in-chief was the writer and journalist Arthur Leist.

In the later years the number of German colonies increased; by 1918 Germans lived in over 20 towns. Most of them had German names and were renamed between the 1920s and the 1940s. By the time of the deportation there were more than 24,000 Germans living in Georgia.[1] From October 1941 to April 1942, most of Georgia’s German families, in total 19,186 people, were deported by the Soviet authorities from the republic.[4]

In the winter of 1818–1819, 194 Swabian German families primarily from Reutlingen arrived to Elisabethpol (official name for Ganja in 1805–1918) from Tiflis. They were granted land 6 kilometres to the west of the city and founded the town of Helenendorf (present-day Goygol) in the summer of 1819. Another German settlement, the town of Annenfeld (later merged with the city of Shamkir) was founded almost simultaneously 40 kilometres away from Helenendorf. Beginning in the 1880s six more German colonies were established throughout Elisabethpol Governorate: Georgsfeld in 1888, Alexejewka in 1902, Grünfeld and Eichenfeld in 1906, Traubenfeld in 1912, and Jelisawetinka in 1914. They became populated mostly by the descendents of the Germans from the two older colonies. By 1918 according to the German consul in Constantinople, there were 6,000 Germans living in the colonies overall.

Commonly referred to as nemsə (from the Russian немец – "German") by the local Azeri population, Germans in Elisabethpol Governorate were traditionally engaged in farming, however starting from 1860 viticulture was becoming more and more important in the life of the German agricultural communities. By the end of the nineteenth century 58% of the region's wine production was manufactured by the Vohrer Brothers and the Hummel Brothers of Helenendorf.[5]

In 1865 and 1883, Siemens built two copper smelteries in Gadabay and a hydroelectic station in Galakand. In the 1860s, it initiated cobalt extraction in Dashkasan and built two power stations in Baku.[6] The Siemens smelteries were officially closed down in 1914 when the Russian Empire entered World War I fighting against Germany and the Czarist government banned all German businesses in Russia.[7] Baku's booming oil industry attracted many people from all over the Caucasus there. By 1903, the German population of the city had grown to 3,749 (2.4% of the city's entire population at the time) and consisted mostly of natives of the original German colonies.[8] Nikolaus von der Nonne, an ethnic German who had been working in Baku since 1883, was the mayor of Baku from 1898 to 1902.[9]

Helenendorf became the primary spiritual centre for the Germans of the eight colonies. The oldest Lutheran church in Azerbaijan, St. John's Church was built in this town in 1857. Other Lutheran churches were built in Gadabay, Shamakhi, Baku and Annenfeld in 1868, 1869, 1897 and 1911 respectively. The ceremony of laying the first stone of Baku's German Church of the Saviour was attended by Emanuel Nobel, brother of Alfred Nobel, and other members of the city's elite.[10]

Germans became an active and well-integrated community in Azerbaijan. Azeri was often spoken as a second or third language among them. Dolma, a traditional Azeri dish, became as common with the Caucasus Germans as traditional German dishes.[11] During the brief of Azerbaijan's independence in 1918–1920 the centenary of Helenendorf was marked by public celebration within the community. The German community was also represented in the parliament of the republic by Lorenz Kuhn, a Helenendorf-born oil industry businessman.[12] With the establishment of the Soviet power in Azerbaijan, the Communist government seated in Moscow initially showed favourable attitude towards multiculturalism. By 1926, there were seven public primary schools in Azerbaijan with German as the language of instruction.[13] This attitude later changed; the Bolsheviks gradually ordered to rename all German-sounding place-names until the mid-1930s. By the time of the deportation in 1941, there were over 23,000 Germans living in Azerbaijan.[1]

Richard Sorge, the famous ethnic German Soviet spy, was born in the suburb of Baku in 1895. His father was a German mining engineer who worked for the Caucasus Oil Company. Sorge is considered to have been one of the best Soviet spies in Japan before and during World War II and he was posthumously awarded the honorary title of Hero of the Soviet Union. The city of Baku dedicated to him a monument and a park.

The history of the Germans in Armenia began with their immigration to the Transcaucasus.[14] Settlement of Germans was encouraged by Russian authorities. Those who came from Württemberg were inspired by the concept of meeting the end of the world at the foot of Mount Ararat.[15] Although Caucasus Germans did indeed move to Armenia and had a presence there, most settlements were scattered and no German colonies were firmly established in the region. In 1926, the German community in Armenia numbered 104 persons.[16] By 1939, this numbered increased to 433 (still low compared to its neighboring regions).[17]

Similarly, during World War II, Armenia's 212 Germans were deported to Kazakhstan on the pretext that their loyalties were with Germany, even though this was not the case.[18] Thus Armenia's German population never exceeded 500 people in the following decades; that number has been on constant decline since 1970.[19][20][21][22] This decrease was accelerated by Armenia's independence in 1991.

After Kars became part of Russia in 1878, the imperial government launched a campaign to Christianize the newly established Kars Oblast (Kars Province) by resettling fellow Greek-Orthodox Pontic Greeks (in this region often referred to as Caucasus Greeks) as well as non-Greek-Orthodox Armenians, Germans, and Estonians in the area. In 1891, a further number of German families were resettled in Kars from the colony of Alexandershilf near Tiflis[23] and established the village of Petrowka. Its population remained relatively low and consisted of about 200 people by 1911. Another two colonies in the province, Wladikars and Estonka, were founded between 1911 and 1914. These settlements were short-lived as with the Russian-Ottoman military confrontation in 1914 (following the outbreak of World War I), most of the remaining German settlers from Kars Oblast were evacuated to Eichenfeld (see History in Azerbaijan). [14]

After the 1917 formation of Transcaucasian Federation, the German colonists came together to form the Transcaucasian German National Council (Transkaukasischer Deutscher Nationalrat), with its seat in Tbilisi, Georgia. After the Sovietization of Georgia, Azerbaijan and Armenia in 1920–1921, the Soviet government pursued the goal of eliminating the German cultural presence in the region by closing down German schools and changing German-souding names of virtually all the colonies. After the Nazi attack on the Soviet Union in June 1941, it was a matter of one week that almost 200,000 Caucasus Germans got deported to remote regions of Kazakhstan and Siberia. The only ones not subject to deportation were German women who were married to non-Germans. Even though soon after Joseph Stalin's death in 1953 the ban for the majority of the deported peoples to return to Europe was lifted, relatively few returned. In 1979 there were only 46,979 Germans living in both North and South Caucasus.[21]

As of 2002, there were approximately 30 older women of German ancestry left in Bolnisi. The German town cemetery leveled under Stalin is marked today by a memorial honouring the memory of the German colonists. Recently, there has been increasing interest on the part of local youth to find out more about their German heritage. Often this desire is closely related to Protestant beliefs, so as a result the New Apostolic Church works intensively with these young people as part of its regular youth programs.

The German community of Armenia, though heavily Russified and numbering less than 100 families, has been working closely with the German Educational and Cultural Center of Armenia to help organize German language schools, cultural events, etc.[15]

In Azerbaijan, the remaining Germans are concentrated in the capital city of Baku, and many belong to the Evangelical Lutheran Community restored and officially registered in the early 1990s. The last German resident of Goygol (Helenendorf), Viktor Klein, died in 2007.[24] The city has nowadays over 400 buildings whose construction dates back to the German period. In 2015, according to Klein's will, his familial house, built by his grandfather in 1886, was turned into the Museum of Caucasus German History.[25] In 2009, the non-functioning Lutheran church in Shamkir (which Annenfeld was absorbed into) used as a community centre in the Soviet times was renovated and turned into a museum.[26] Gadabay's German population left by 1922 after the exhaustion of the copper business. The Lutheran church of the town was raized by Bolsheviks in the 1920s.[7]

The last German resident of the Estonka colony (present-day village of Karacaören, Kars Province), Frederik Albuk, died in 1999 in his native village, survived by his wife Olga Albuk of Russian-Estonian ancestry, who died there in August 2011. The 150-grave Lutheran cemetery where they were buried is the remnant of the German community's presence in Eastern Anatolia.[27]