Example of the causative alternation with the English verb 'break':

Cross-linguistically, the verbs that participate in the causative alternation are anticausatives which denote movement or a change of state or degree.[2] 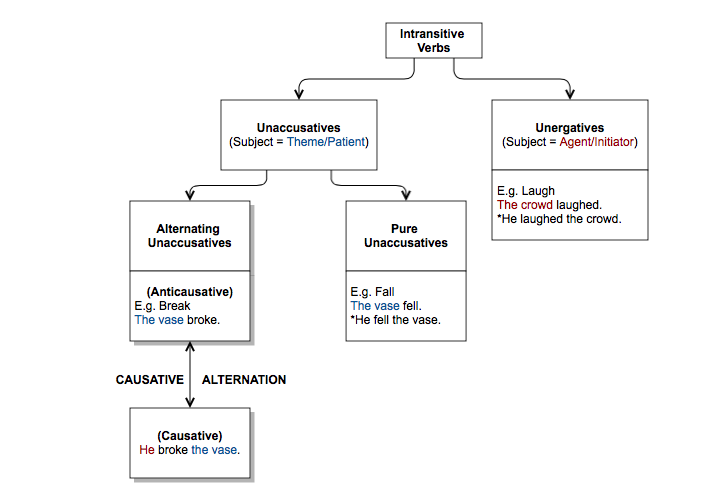 This flow chart shows that alternating unaccusatives (anticausatives) can participate in causative alternation. It is a visual representation based on information discussed in Schäfer.[2]

Under one possible and fairly common analysis (called the Unnacusative Hypothesis), unaccusatives and unergatives form the two subclasses of intransitive verbs.[2][4][5] Unaccusative verbs cannot assign case to their deep-structure object which bears the theme/patient thematic role; because of this, the object moves to the subject position in the surface form in order to obtain case in accordance with Burzio's generalization. The movement of "the book" from object position to subject position is traced in example (3a). Therefore, unaccusative verbs take a semantic theme or patient subject.[4] On the other hand, unergative verbs take a semantic agent or initiator subject.[4]

(3a) The booki fell ti (unaccusative)
(3b) The child laughed (unergative)

Though some unaccusative verbs can undergo causative alternation (anticausatives), it is never the case that an unergative (like “laugh”) can.[2]

The general consensus in the field is that there is a derivational relationship between verbs undergoing the causative alternation that share the same lexical entry. From this it follows that there is uncertainty surrounding which form, the intransitive or the intransitive, is the base from which the other is derived. Another matter of debate is whether the derivation takes place at the syntactic or lexical level.[2]

With reference to these assumptions, syntactic and lexicalist accounts have been proposed. These approaches account for intransitive, transitive and common base approaches.[2]

According to the intransitive base/causativization approach, the intransitive form is the base and a causative predicate is added to the Lexical Conceptual Structure (LCS) in order to make the verb transitive. In the following example (7), the basic LCS, “The stick broke.” is embedded under a cause predicate, in this case “Katherine,” to form the derived LCS “Katherine broke the stick.”

In (7a), “x” is the variable (“stick”), and the CHANGE operator refers to the change-of-state (“break”). In the anticausative (“the stick broke”) “the stick” undergoes the change “break”, namely, the stick breaks. Moreover, the “y” variable refers to “Katherine” and the CAUSE operator refers to the cause of the change (“break”). In the causative, (“Katherine broke the stick”), it is “Katherine” who causes the action “break”, and is therefore the cause operator.

The transitive/decausativation approach, assumes a lexical operation which performs precisely the opposite of the causativization approach discussed above.

Under a syntactic intransitive base approach, the transitive form is derived from the intransitive form by insertion of a verbal layer projected by a head expressing causation and introducing the external agent argument.[2] This idea assumes that a verbal phrase is able to be separated into different layers of verbal projections whereby each of the layers provide a specifier where an argument can be attached.[12] In addition, the layers are joined together by head movement of the lowest verb head to positions higher in the syntactic structure. Change-of-state verbs are broken-down into the verbal layers of initiation phrase (initP), process phrase (procP) and result phrase (resP), which approximately correspond to the predicate cause, become, and state respectively.[13]

Example (9a), the anticausative variant, is basic according to the intransitive base approach. The theme ("the stick") is initially merged into the specifier of resP and that it then moves to the specifier of procP.[13] The theme, (“stick”) is therefore given a complex theta-role of both the resultee and the undergoer of the event. In the syntax, the causative form is derived through the addition of an init-head, which introduces the external initiator argument (“Katherine”) in example (9b).[13]

These trees illustrate a syntactic account.[13]
300px
(9a) The stick broke (anticausative)
300px
(9b) Katherine broke the stick (causative)

Connecting the lexical and syntactic analyses

The syntactic and lexical analyses correspond in the following ways:

Children typically begin to generate causatively alternating verbs around the age of 1;11 (years;months).[14] Around this time the causative alternations closely resemble an adult-like form; however, around the age of 2;6 to 12;0 children begin making common errors of overregularization, in which they erroneously overuse the causative.[15] Children often acquire the syntactic pattern that goes along with verbal alternations; however, that does not mean that they acquire the lexical semantic restrictions that accompany these alternations.[14] Three common overregulizations include:[16]

In (29a), children are incorrectly using a causative/transitive structure with a fixed intransitive verb (“swim”).

In (29b) children are mistakenly employing a causative/transitive verb (“cut”) in an intransitive environment, where “cut” has the meaning of ‘separate in half.’

(29c) Suppletive verb substitutions which have different lexical items to show cause:

In language acquisition, once children establish that a particular transitivity alternation is productive, they often extend the alternation to new verbs,[16] despite the argument structure of the individual verb. It has been suggested that causative alternation errors come from three sources:[15][16]

(30a) Lexical rules being applied too broadly, thus not recognizing the narrow semantic restrictions of verbs
(30b) Reflections of retrieval errors, where the wrong verb stem is retrieved under discourse pressure
(30c) Immature rule system, where the absence of the adult rule leads to errors in productions

When acquiring causatively alternating verbs children must learn both the semantic representation and the argument structure of each verb to produce grammatical sentences [17] It has been suggested that children learn this is through the no negative evidence problem; for example a child will learn that the verb ‘throw’ can never be used in a subject position: *”the ball threw”.[17]

In children with specific language impairments

Children with specific language impairments (SLI) tend to produce less mature responses (i.e., different verb and adjectival) and fewer mature responses (periphrastics and passives) compared to children of the same age comparison (AC). The children with SLI produced slightly fewer overgeneralizations, but in general, did no appear to differ in frequency or type of overgeneralizations when compared to the AC children. In English, children need to be able to organize verbs into three separate syntactic groups in order to properly use causative alternations. These syntactic groups include:

While children with SLI can typically use the lexical alternation for causative alternation as well as AC children, they tend to have difficulty using the syntactic cues to deal with verbs with fixed transitivity.[16]

In many Indo-European languages, causative alternation regularly involves the use of a reflexive pronoun, clitic, or affix in the inchoative use of the verb.[18] A reflexive pronoun is a pronoun that is preceded by the noun, adjective, adverb or pronoun to which it refers (its antecedent) within the same clause.[19]

French is a Romance language which incorporates the use of a reflexive pronoun with a verb's inchoative form.

Seen in (10) is the causative use of the verb "briser", conjugated in past tense.

Seen in (11) is the anticausative use of the verb.

Italian is another Romance language that, like French, incorporates the use of a reflexive pronoun with a verb's inchoative form.

Seen in (12) is the causative use of the verb "chiusere" conjugated in past tense.

Seen in (13) is the anticausative use of the verb.

the window REFL is closed
”The window closed.” [2]

Note the use of the reflexive pronoun “si” in (13), which behaves in the same manner as the French “se” shown in example (11).

It is common for languages to use a reflexive marker to signal the inchoative member of an alternating pair of verbs.[20] Inchoative verbs in German are marked either by the reflexive pronoun “sich”, or not marked at all.[20]

Shown in examples (14) and (15) is a verb that alternates without any use of a reflexive pronoun:

Seen in (14) is the causative use of the verb "zerbrechen", conjugated in past tense.

Seen in (15) is the anticausative use of the verb.

Seen in examples (16) and (17) is an example of a verb that requires a reflexive pronoun to denote the anticausative:

Seen in (17) is the anticausative use of the verb.

An example of an ergative verb in Japanese is shown below in examples (18) and (19):

Seen in (19) is the anticausative use of the verb.

Note that in (18) and (19), the form of the verb does not undergo any sort of morphological change, making "開く" an ergative verb.

An example of a paired verb in Japanese is shown below in examples (20) and (21):

In (20), the verb "to drop" takes on the verb form "落とす" - "otosu", conjugated in past tense. The verb "落とす" requires an agent to physically drop an object.

In (21), the verb "to drop" takes on the verb form "落ちる" - "ochiru", conjugated in past tense. The verb "落ちる" is used when there is no agent in the sentence to do the physical dropping of the coin itself.

The following examples (23) and (24) show an ungrammatical use of the causative alternative of the verb "破".

Laozhang da-po-le chuangzi.
Laozhang hit-break-PRT window
'Laozhang broke the window.'
(23) and (24) show that in order for Laozhang to have broken the window, he has to have completed an action in order for it to break. In (23), there is no action that Laozhang performed to cause the window to break, making this sentence ungrammatical. In (24), he hit the window.[24]

Some verbs in Korean bear similarities to the paired verbs in Japanese. Morphological changes take place in order to show transitivity and intransitivity.[26]

Shown in (26) is the anticausative use of the verb, conjugated in past tense.

In examples (25) and (26), it is seen that the infinitive (unconjugated) forms of the verb "yeolda" are the same, but causative and anticausative forms take on different conjugated forms in order to show causativity.

Korean also bears similarities to Chinese in its verbal compounding.

Shown in (27) and (28) is an example of a verb that requires compounding in order to be grammatical in the causative use.

Seen in (27) is the anticausative use of the verb "죽다" - "jugda", conjugated in past tense.

Seen in (28) is the causative use of the verb, conjugated in past tense.

Example (28) shows that the verb "jugda" behaves similarly to the verb "po" in Mandarin Chinese seen in example (26) in that the verb requires some sort of action performed by the agent.