Cellular neuroscience is the study of neurons at a cellular level. This includes morphology and physiological properties of single neurons. Several techniques such as intracellular recording, patch-clamp, and voltage-clamp technique, pharmacology, confocal imaging, molecular biology, two photon laser scanning microscopy and Ca2+ imaging have been used to study activity at the cellular level. Cellular neuroscience examines the various types of neurons, the functions of different neurons, the influence of neurons upon each other, how neurons work together.

Neurons are cells that are specialized to receive, propagate, and transmit electrochemical impulses. In the human brain alone, there are over eighty billion neurons. Neurons are diverse with respect to morphology and function. Thus, not all neurons correspond to the stereotypical motor neuron with dendrites and myelinated axons that conduct action potentials. Some neurons such as photoreceptor cells, for example, do not have myelinated axons that conduct action potentials. Other unipolar neurons found in invertebrates do not even have distinguishing processes such as dendrites. Moreover, the distinctions based on function between neurons and other cells such as cardiac and muscle cells are not helpful. Thus, the fundamental difference between a neuron and a nonneuronal cell is a matter of degree.

Another major class of cells found in the nervous system are glial cells. These cells are only recently beginning to receive attention from neurobiologists for being involved not just in nourishment and support of neurons, but also in modulating synapses. For example, Schwann cells, which are a type of glial cell found in the peripheral nervous system, modulate synaptic connections between presynaptic terminals of motor neuron endplates and muscle fibers at neuromuscular junctions.

"Current Clamp" is a common technique in electrophysiology. This is a whole cell current clamp recording of a neuron firing a train of action potentials due to it being depolarized by current injection

Structure and formation of synapses 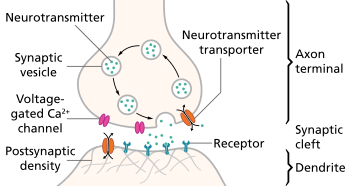 Illustration of the major elements in a prototypical synapse. Synapses are gaps between nerve cells. These cells convert their electrical impulses into bursts of neurochemical relayers, called neurotransmitters, which travel across the synapses to receptors on the dendrites of adjacent cells, thereby triggering further electrical impulses to travel down the latter cells.

Neurons communicate with one another via synapses. Synapses are specialized junctions between two cells in close apposition to one another. In a synapse, the neuron that sends the signal is the presynaptic neuron and the target cell receives that signal is the postsynaptic neuron or cell. Synapses can be either electrical or chemical. Electrical synapses are characterized by the formation of gap junctions that allow ions and other organic compound to instantaneously pass from one cell to another.[1] Chemical synapses are characterized by the presynaptic release of neurotransmitters that diffuse across a synaptic cleft to bind with postsynaptic receptors. A neurotransmitter is a chemical messenger that is synthesized within neurons themselves and released by these same neurons to communicate with their postsynaptic target cells. A receptor is a transmembrane protein molecule that a neurotransmitter or drug binds. Chemical synapses are slower than electrical synapses.

Synaptic plasticity is the process whereby strengths of synaptic connections are altered. For example, long-term changes in synaptic connection may result in more postsynaptic receptors being embedded in the postsynaptic membrane, resulting in the strengthening of the synapse. Synaptic plasticity is also found to be the neural mechanism that underlies learning and memory.[2] The basic properties, activity and regulation of membrane currents, synaptic transmission and synaptic plasticity, neurotransmisson, neuroregensis, synaptogenesis and ion channels of cells are a few other fields studied by cellular neuroscientists.[3][4] Tissue, cellular and subcellular anatomy are studied to provide insight into mental retardation at the Mental Retardation Research Center MRRC Cellular Neuroscience Core.[5] Journals such as Frontiers in Cellular Neuroscience and Molecular and Cellular Neuroscience are published regarding cellular neuroscientific topics.[citation needed]