Central European Time (CET), used in most parts of the European Union, is a standard time which is 1 hour ahead of Coordinated Universal Time (UTC). The time offset from UTC can be written as +01:00. The same standard time, UTC+01:00, is also known as Middle European Time (MET, German: MEZ) and under other names like Berlin Time, Romance Standard Time, Paris Time or Rome Time.[1]

The 15th meridian east is the central axis for UTC+01:00 in the world system of time zones.

As of 2011 all member states of the European Union observe summer time; those that use CET during the winter use Central European Summer Time (CEST) (or: UTC+02:00, daylight saving time) in summer (from last Sunday of March to last Sunday of October).

The time around the world is based on Universal Coordinated Time (UTC) which is roughly synonymous with Greenwich Mean Time (GMT). From late March to late October, clocks in the United Kingdom are put forward by one hour for British Summer Time (BST). Since 1997, most of the European Union aligned with the British standards for BST. Central European Time is thus always one hour ahead of British time.[citation needed]

In 1968 there was a three-year experiment called British Standard Time, when the UK and Ireland experimentally employed British Summer Time (GMT+1) all year round; clocks were put forward in March 1968 and not put back until October 1971.[citation needed]

Central European Time is sometimes referred to as continental time in the UK. 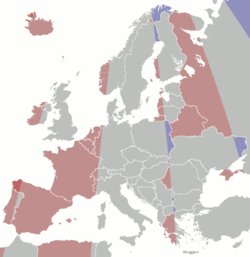 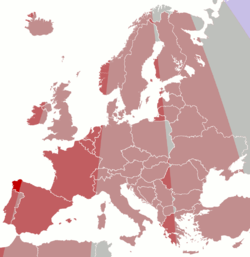 Legal, political and economic, as well as physical or geographical criteria are used in the drawing of time zones so official time zones rarely adhere to meridian lines. The CET time zone, were it drawn by purely geographical terms, would consist of exactly the area between meridians 7°30′ E and 22°30′ E. As a result, there are European locales that despite lying in an area with a "physical" UTC+1 time, actually use another time zone (UTC+2 in particular – there are no "physical" UTC+1 areas that employ UTC). Conversely, there are European areas that have gone for UTC+1, even though their "physical" time zone is UTC (typically), UTC−1 (westernmost Spain), or UTC+2 (e.g. the very easternmost parts of Norway, Sweden, Poland and Serbia). On the other hand, the people in Spain still have all work and meal hours one hour later than France and Germany even if they have the same time zone.[citation needed] Following is a list of such "incongruences":

Historically Gibraltar maintained UTC+1 all year until the opening of the land frontier with Spain in 1982 when it followed its neighbour and introduced CEST. 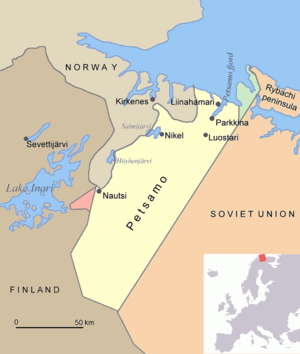 Map of Petsamo area in northern Finland/Soviet Union/Russia. The green area is the Finnish part of the Rybachi peninsula (Kalastajasaarento) which was ceded to the Soviet Union after the Winter War. The Red area is the Jäniskoski-Niskakoski area ceded to the USSR in 1947.