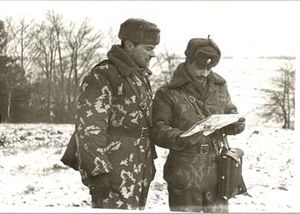 The Central Group of Forces was a formation of the Soviet Armed Forces used to control Soviet troops in Central Europe on two occasions: in Austria and Hungary from 1945-55 and troops stationed in Czechoslovakia after the Prague Spring of 1968.

After the end of the Second World War, the Soviet High Command (Stavka) reorganized its troops on the territories it liberated from the Nazi occupation and now occupied. Stavka Directive Nr 11097 on 10 June 1945 created several new formations, known as Groups of Forces, equivalent to military districts but located outside the Soviet Union. The Central Group of Forces was created around that time from the 1st Ukrainian Front to control troops in Austria and Hungary, and did so from 1945 until 1955, when Soviet troops were withdrawn from Austria after the Austrian State Treaty was agreed.

Its first commander was Marshal of the Soviet Union Ivan Konev. On its creation it consisted of the 4th, 5th, and 7th and 9th Guards Armies, the 1st Guards Cavalry Corps, the 7th and 10th Breakthrough Artillery Corps, 3rd and 4th Guards Tank Armies, the 2nd Air Army, and the 18th Tank and 7th Guards Mechanized Corps.[1] Headquarters was at Baden bei Wien. During the summer of 1945, 7th and 9th Guards Armies were withdrawn back to the Soviet Union. By the end of the summer, the corps directly subordinated to the group had been withdrawn. Army General Vladimir Kurasov commanded the Group from 12 June 1946 to 20 April 1949.[2]

In August 1946, the 4th Guards Army was withdrawn to the Odessa Military District. On 20 March 1947, the 5th Guards Army was disbanded. In May 1947, the 3rd and 4th Guards Mechanized Armies (former 3rd and 4th Guards Tank Armies), now reduced to mobilization divisions, were transferred to the Group of Soviet Occupation Forces in Germany. In February 1949, the 2nd Air Army was renumbered as the 59th. On 20 April 1949, Kurasov was replaced by Lieutenant General Vladimir Svirivdov. On 14 May 1953, Colonel General Sergey Biryuzov replaced Sviridov in command. Colonel General Aleksey Semenovich Zhadov took command on 31 May 1954. [2]

In June 1955 the group included the following units.[3] The dispositions of the group did not change between then and its disbandment in September.[2]

The group was disbanded in September 1955 due to the withdrawal of Soviet troops from Austria. The 2nd and 17th Guards Mechanized Division became part of a newly formed Special Corps on Hungarian territory. The 13th Guards Mechanized Division and 95th Guards Rifle Division were moved to the Carpathian Military District. The remaining units, including the headquarters of the 59th Air Army, were disbanded. [2]

The Central Group of Forces was reinstituted as a legacy of the 1968 Prague Spring events. Till that time, no Soviet troops were permanently garrisoned within Czechoslovakian territory. The Central Group of forces had a total strength of about 85,000 and included 28th Army Corps headquarters (Olomouc, Czechoslovakia, 8.1968 - 7.1991), moved forward from Chernovitsy in the Carpathian Military District.[4] Forces included two tank divisions, three mechanized infantry divisions, three missile brigades, an artillery brigade, and an airborne assault brigade. Four of the five Soviet ground divisions in Czechoslovakia were stationed in the Czech lands (15th Guards Tank Division at Milovice, 18th Guards Motor Rifle Division at Mladá Boleslav, 48th MRD at Vysoké Mýto, and 31st Tank Division at Bruntál), while one was headquartered in Slovakia (the 30th Guards Motor Rifle Division at Zvolen). Group headquarters was located in Milovice (38 km northeast of Prague). Also at Milovice was the 131st Mixed Aviation Division, which arrived from Ivano-Frankovsk in the Ukrainian SSR in August 1968.[5]

Organization of Central Group of Forces as of 1988

Following the end of the Cold War, the force was withdrawn as follows: