From Infogalactic: the planetary knowledge core
Jump to: navigation, search
For the university, see University of Central Oklahoma. 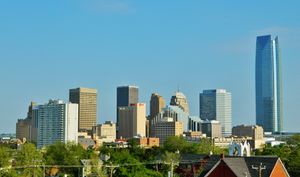 Central Oklahoma is the geographical name for the central region of the U.S. state of Oklahoma. It is also known by the Oklahoma Department of Tourism designation, Frontier Country.

Central Oklahoma is a humid-subtropical region dominated by the Cross Timbers, an area of prairie and patches of forest at the eastern extent of the Great Plains.[1] The region is essentially a transition buffer between the wetter and more forested Eastern Oklahoma and the semi-arid high plains of Western Oklahoma, and experiences extreme swings between dry and wet weather patterns. Climate is dominated by large differences in annual rainfall totals, with Central Oklahoma's western boundary receiving far less rain than compared to its eastern boundary.

Because of these convergences of dry and wet weather patters, Central Oklahoma is at the heart of what is known as Tornado Alley, and is one of the most tornado-prone areas in the United States.

Central Oklahoma is home to The Oklahoman, the most widely circulated in the state. NewsOK.com is the Oklahoman's online presence. okcBIZ is a monthly publication that covers business news affecting those who live and work in Central Oklahoma.

WKY Radio in Oklahoma City was the first radio station transmitting west of the Mississippi River and the third radio station in the United States.[2] WKY received its federal license in 1921 and has broadcast under the same call letters since 1922. In 1928, the station was purchased by the Oklahoma Publishing Company and affiliated with the NBC Red Network. In 1949, WKY-TV (Channel 4) went on the air and later became the first independently owned television station in the U.S. to broadcast in color.[2] In mid-2002, WKY radio was purchased outright by Citadel Broadcasting; in 2011, Citadel merged with Cumulus Media, who owns and operates WKY to this day. WKY-TV, which is now KFOR-TV, is currently owned by Tribune Broadcasting as of December 2013. 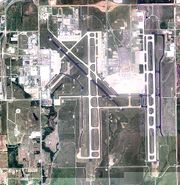 Will Rogers World Airport in Oklahoma City is the primary airport of the region and the busiest in the state. The airport has one terminal with 17 gates, but is in the process of expansion.[3] Wiley Post Airport in Bethany and Max Westheimer Airport in Norman serve as reliever airports for Will Rogers Airport.[4] The region is also home to Tinker Air Force Base, the largest military air depot in the nation; Clarence E. Page Municipal Airport, a city-owned public use airport in Canadian County, Oklahoma; and Sundance Airpark, a privately owned public use airport in Canadian County.

There are no sea ports in Central Oklahoma, as water exports must go through Northeastern Oklahoma via Tulsa, which has one of two large-scale seaport in the state.

There are four primary highways in Central Oklahoma. Interstate 35 connects the region with Texas and Kansas to the south and north, Interstate 40 connects with West Texas and Arkansas, and Interstate 44 is a turnpike its entire duration through the region (except within Oklahoma City), and traverses from Southwest Oklahoma to Missouri.

The region is served by the BNSF Railway, the Union Pacific Railroad, and several short-line railroads. Daily passenger service from Oklahoma City to Fort Worth, Texas, is provided by the Oklahoma Department of Transportation through a fee-for-service contract with Amtrak.

Union Bus Station in Oklahoma City is the principal bus terminal in the region and the state.