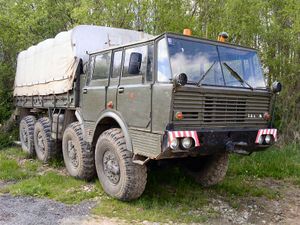 Tatra T813 prototype had CTIS already in 1960, it later became standard for all Tatra military trucks.

Another function of the CTIS is to maintain pressure in the tires if there is a slow leak or puncture. In this case, the system controls inflation automatically based on the selected pressure the driver has set.[1]

CTIS is extensively used in many off-road transport operations. In many countries, especially Australia, New Zealand and South Africa, CTIS is used in logging, in mining, and in power line maintenance. CTIS significantly reduces environmental impact when transporting logs, or travelling on gravel or dirt roads. Benefits include ironing out ruts and previous road damage, like washboards or corrugations. Reducing the tire pressure also reduces the grinding action on the gravel, significantly reducing dust and silt.

There have been attempts at employing central tire inflation system on aircraft landing wheels (notably on the Soviet Antonov An-22 military transport) to improve their preparedness for unpaved runways.

CTIS was first used in production on the American DUKW amphibious truck which was introduced in 1942.

From 1984, GM offered CTIS for the Chevrolet Blazer and various pick-ups. Several trucks used by the U.S. military also have CTIS (eg. the HMMWV and its civilian counterpart, the Hummer H1). The feature is also common in Soviet and Russian military trucks.