The Chadian Air Force, in French Force Aérienne Tchadienne, was formed in 1961 as the Escadrille Nationale Tchadienne (Chadian National Flight/Squadron), and was given its current name in 1973. It continues to be part of the Chadian Army.

The force shares a base with French forces at N'Djamena International Airport.

In the 1960s the Chadian Air Force consisted of one hundred men, one DC-3 cargo aircraft, three light observation aircraft, and two helicopters.

In 1973, when its strength was increased to 200 men, the air force possessed three C-47 medium transport aircraft (increased to 13 in the mid-1970s), three light transport planes, and one helicopter, all serviced at the local French air base in N'Djamena. Nearly all of the pilots at the time were French. C-47 tail numbers included 100509, 10307 and 10409.

In 1976, the Air Force obtained 7 Douglas AD Skyraiders from France, which were used in anti-guerrilla campaigns in the north until 1987 when they were deemed inoperable. (Tail numbers included Skyraider 126959). Skyraiders first saw service in Chad with the Armée de l'Air, and later with the nominally independent Chadian Air Force, staffed by French mercenaries.[1]

The Aviation Safety Network listed four incidents between 1976 and 1987, one involving a Douglas DC-3, a Douglas DC-4 that was shot down by a Surface-to-air missile and the remaining two with the C-130 Hercules transports, one crashing during a routine takeoff, the other during a landing. [1]

During the 1983 conflict with Libya, the Chad Air Force reported destroying eight Libyan Aermacchi SF-260s. Three were captured and served from 1987. One crashed in 1989 and another was sold to the US. Chad also acquired 24 Stinger shoulder-launched SAMs in late 1987.

According to several news reports, the Chad Air Force was heavily involved in beating back a rebel invasion from neighboring Sudan in 2009.[2] Sudanese officials also claimed that Chad aircraft made several cross-border raids into Sudan during the conflict.[3] However, media reports are unclear as to exactly what types of aircraft were used by Chad to fend off the rebels and to conduct the cross-border strikes.

As of 1987, the Air Force was commanded by Lt. Mornadji Mbaissanabe. On November 15, 2000, an unidentified Chadian Air Force Chief of Operations applied for refugee status in Canada, claiming he had accused the Chadian government of human rights violations.[2]

In 2004, while transporting journalists and UN officials to a tarmac meeting with Kofi Annan, one of the Chadian helicopters malfunctioned and made a rough landing in the desert. [3] After its repair, it transported US Marines into Niger. [4]

Chad lost at least one helicopter during the Battle of Adre, on December 18, 2005. 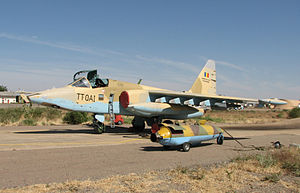 Operational aircraft of the force may be far less than official figures represent. According to a report in Le Figaro in April, 2006, the Chad Air Force consisted only of two Lockheed C-130 Hercules transports, one working Mil Mi-17 Hip-H helicopter, and two non-working Mil Mi-24 "Hind" helicopters.[5] Later C-130 TT-PAF was lost in a landing accident at Abéché, Chad, on 11 June 2006 (Aircraft Safety Network).