From Infogalactic: the planetary knowledge core
Jump to: navigation, search
For other uses, see Chainsaw (disambiguation). 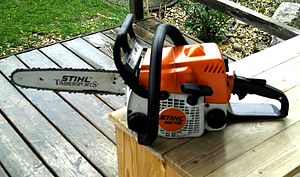 A chainsaw (or chain saw) is a portable, mechanical saw which cuts with a set of teeth attached to a rotating chain that runs along a guide bar. It is used in activities such as tree felling, limbing, bucking, pruning, to fell snags and assist in cutting firebreaks in wildland fire suppression, and to harvest firewood. Chainsaws with specially designed bar and chain combinations have been developed as tools for use in chainsaw art and chainsaw mills. Specialist chainsaws are used for cutting concrete. Chainsaws are sometimes used for cutting ice, for example for ice sculpture and in Finland for winter swimming. Someone who uses a saw is a sawyer. 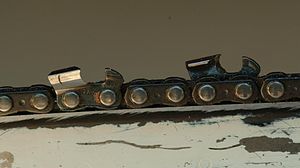 A chainsaw consists of several parts:

The underside of each link features a small metal finger called a "drive link" which locates the chain on the bar, helps to carry lubricating oil around the bar, and engages with the engine's drive sprocket inside the body of the saw. The engine drives the chain around the track by a centrifugal clutch, engaging the chain as engine speed increases under power, but allowing it to stop as the engine speed slows to idle speed.

Dramatic improvements, chainsaw safety devices and overall design have taken place since the chainsaw's invention, saving many lives and preventing countless serious injuries. These include chainbrake systems, better chain design and anti-vibration systems. As chainsaw carving has become more popular, chainsaw manufacturers are making special short, narrow-tipped bars for carving. These are called "quarter tipped," "nickel tipped" or "dime tipped" bars, based on the size of the round tip. Chainsaw manufacturer Echo sponsors a carving series,[1] as well as carvers such as former Runaways singer Cherie Currie.[2] Some chainsaws such as the RedMax G3200 CV are built specifically for carving applications.[3] 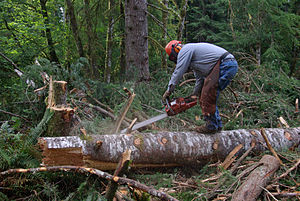 Two-stroke chainsaws require about 2–5% of oil in the fuel to lubricate the motor, while the motor in electrical chain-saws is normally lubricated for life.

Separate chain oil or bar oil is used for the lubrication of the bar and chain on all types of chain-saw. The chain oil is depleted quickly because it tends to be thrown off by chain centrifugal force, and it is soaked up by sawdust. On two-stroke chainsaws the chain oil reservoir is usually filled up at the same time as refuelling. The reservoir is normally large enough to provide sufficient chain oil between refuelling. Lack of chain-oil, or using an oil of incorrect viscosity, is a common source of damage to chain-saws, and tends to lead to rapid wear of the bar, or the chain seizing or coming off the bar. In addition to being quite thick, chain oil is particularly sticky (due to "tackifier" additives) to reduce the amount thrown off the chain. Although motor oil is a common emergency substitute, it is lost even faster and so leaves the chain under-lubricated.

Chains must be kept sharp to perform well. They become blunt rapidly if they touch soil, metal or stones. When blunt, they tend to produce powdery sawdust, rather than the longer, clean shavings characteristic of a sharp chain; a sharp saw also needs very little force from the operator to push it into the cut. Special hardened chains (made with tungsten carbide) are used for applications where soil is likely to contaminate the cut, such as for cutting through roots.

The air intake filter tends to clog up with sawdust. This must be cleaned from time to time, but is not a problem during normal operation. 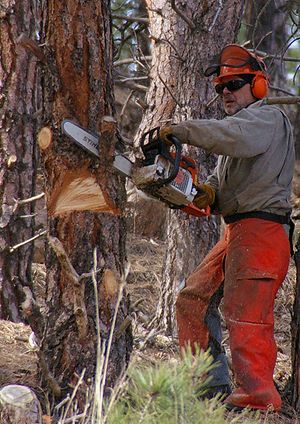 Despite safety features and protective clothing, injuries can still arise from chainsaw use, from the large forces involved in the work, from the fast-moving, sharp chain, or from the vibration and noise of the machinery.[4]

A common accident arises from kickback, when a chain tooth at the tip of the guide bar catches on wood without cutting through it.[5] This throws the bar (with its moving chain) in an upward arc toward the operator which can cause serious injury or even death.

Another dangerous situation occurs when heavy timber begins to fall or shift before a cut is complete — the chainsaw operator may be trapped or crushed.[6] Similarly, timber falling in an unplanned direction may harm the operator or other workers, or an operator working at a height may fall or be injured by falling timber.

Like other hand-held machinery, the operation of chainsaws can cause vibration white finger,[7] tinnitus or industrial deafness.

The risks associated with chainsaw use mean that protective clothing such as chainsaw boots, chainsaw trousers and hearing protectors are normally worn while operating them, and many jurisdictions require that operators be certified or licensed to work with chainsaws. Injury can also result if the chain breaks during operation due to poor maintenance or attempting to cut inappropriate materials.

Drop starting, or turning on a chainsaw by dropping it with one hand while pulling the starting cord with the other, is a safety violation in most states in the U.S. Keeping both hands on the saw for stability is essential for safe chainsaw use.

Chainsaw training is designed to provide working technical knowledge and skills to safely operate the equipment.[9] 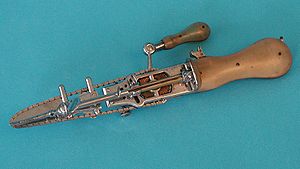 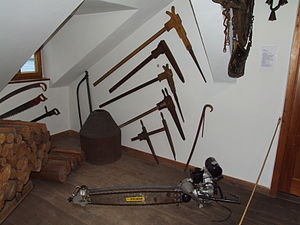 Typical of the earliest chainsaws, this Dolmar saw is operated by two men.

The origin is debated, but a chainsaw-like tool was made around 1830 by the German orthopaedist Bernhard Heine. This instrument, the osteotome, had links of a chain carrying small cutting teeth with the edges set at an angle; the chain was moved around a guiding blade by turning the handle of a sprocket wheel. As the name implies, this was used to cut bone.[11] The prototype of the chain saw familiar today in the timber industry was pioneered in the late 18th century by two Scottish doctors, John Aitken and James Jeffray, for symphysiotomy and excision of diseased bone respectively. The chain hand saw, a fine serrated link chain which cut on the concave side, was invented around 1783-1785. It was illustrated in Aitken's Principles of Midwifery or Puerperal Medicine (1785) and used by him in his dissecting room. Jeffray claimed to have conceived the idea of the chain saw independently about that time but it was 1790 before he was able to have it produced. In 1806, Jeffray published Cases of the Excision of Carious Joints by H. Park and P. F. Moreau with Observations by James Jeffray M.D.. In this communication he translated Moreau's paper of 1803. Park and Moreau described successful excision of diseased joints, particularly the knee and elbow. Jeffray explained that the chain saw would allow a smaller wound and protect the adjacent neurovascular bundle. While a heroic concept, symphysiotomy had too many complications for most obstetricians but Jeffray's ideas became accepted, especially after the development of anaesthetics. Mechanised versions of the chain saw were developed but in the later 19th Century, it was superseded in surgery by the Gigli twisted wire saw. For much of the 19th century, however, the chain saw was a useful surgical instrument. 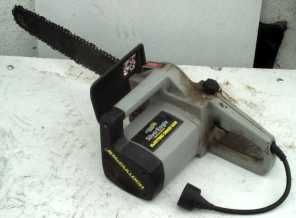 The first portable chainsaw was developed and patented in 1918 by Canadian millwright James Shand. After he allowed his rights to lapse in 1930 his invention was further developed by what became the German company Festo in 1933. The company now operates as Festool producing portable power tools. Other important contributors to the modern chainsaw are Joseph Buford Cox and Andreas Stihl; the latter patented and developed an electrical chainsaw for use on bucking sites in 1926 and a gasoline-powered chainsaw in 1929, and founded a company to mass-produce them. In 1927, Emil Lerp, the founder of Dolmar, developed the world's first gasoline-powered chainsaw and mass-produced them.

World War II interrupted the supply of German chain saws to North America, so new manufacturers sprang up including Industrial Engineering Ltd (IEL) in 1947, the forerunner of Pioneer Saws. Ltd and part of Outboard Marine Corporation, the oldest manufacturer of chainsaws in North America.[12]

McCulloch in North America started to produce chainsaws in 1948. The early models were heavy, two-person devices with long bars. Often chainsaws were so heavy that they had wheels like dragsaws. Other outfits used driven lines from a wheeled power unit to drive the cutting bar.

After World War II, improvements in aluminum and engine design lightened chainsaws to the point where one person could carry them. In some areas the skidder (chainsaw) crews have been replaced by the feller buncher and harvester.

Chainsaws have almost entirely replaced simple man-powered saws in forestry. They come in many sizes, from small electric saws intended for home and garden use, to large "lumberjack" saws. Members of military engineer units are trained to use chainsaws as are firefighters to fight forest fires and to ventilate structure fires. 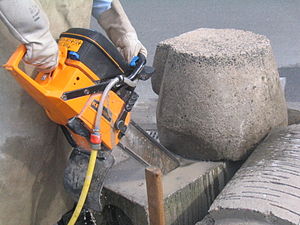 Special chainsaws can cut concrete, brick and natural stone. These use similar chains to ordinary chainsaws, but with cutting edges embedded with diamond grit. They may use gasoline or hydraulic power, and the chain is lubricated with water, because of high friction and to remove stone-dust. The machine is used in construction, for example in cutting deep square holes in walls or floors, in stone sculpture for removing large chunks of stone during pre-carving, by fire departments for gaining access to buildings and in restoration of buildings and monuments, for removing parts with minimal damage to the surrounding structure. More recently concrete chainsaws with electric motors of 230 volts have also been developed.[13]

Because the material to be cut is non-fibrous, there is much less chance of kickback. Therefore, the most-used method of cutting is plunge-cutting, by pushing the tip of the blade into the material. With this method square cuts as small as the blade width can be achieved. Pushback can occur if a block shifts when nearly cut through and pinches the blade, but overall the machine is less dangerous than a wood-cutting chainsaw.