From Infogalactic: the planetary knowledge core
Jump to: navigation, search
This article is about the sedimentary rock. For other uses, see Chalk (disambiguation).

Chalk /ˈtʃɔːk/ is a soft, white, porous sedimentary carbonate rock, a form of limestone composed of the mineral calcite. Calcite is calcium carbonate or CaCO3. It forms under reasonably deep marine conditions from the gradual accumulation of minute calcite shells (coccoliths) shed from micro-organisms called coccolithophores. Flint (a type of chert unique to chalk) is very common as bands parallel to the bedding or as nodules embedded in chalk. It is probably derived from sponge spicules or other siliceous organisms as water is expelled upwards during compaction. Flint is often deposited around larger fossils such as Echinoidea which may be silicified (i.e. replaced molecule by molecule by flint).

Chalk as seen in Cretaceous deposits of Western Europe is unusual among sedimentary limestones in the thickness of the beds. Most cliffs of chalk have very few obvious bedding planes unlike most thick sequences of limestone such as the Carboniferous Limestone or the Jurassic oolitic limestones. This presumably indicates very stable conditions over tens of millions of years. 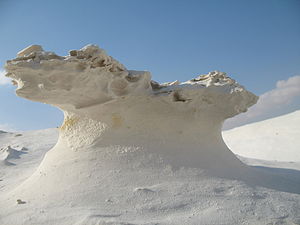 Chalk has greater resistance to weathering and slumping than the clays with which it is usually associated, thus forming tall steep cliffs where chalk ridges meet the sea. Chalk hills, known as chalk downland, usually form where bands of chalk reach the surface at an angle, so forming a scarp slope. Because chalk is well jointed it can hold a large volume of ground water, providing a natural reservoir that releases water slowly through dry seasons.

The Chalk Group is a European stratigraphic unit deposited during the late Cretaceous Period. It forms the famous White Cliffs of Dover in Kent, England, as well as their counterparts of the Cap Blanc Nez on the other side of the Dover Strait. The Champagne region of France is mostly underlain by chalk deposits, which contain artificial caves used for wine storage. Some of the highest chalk cliffs in the world occur at Jasmund National Park in Germany and at Møns Klint in Denmark – both once formed a single island.

Ninety million years ago what is now the chalk downland of Northern Europe was ooze accumulating at the bottom of a great sea. Chalk was one of the earliest rocks made up of sub-microscopic particles to be studied under the electron microscope, when it was found to be composed almost entirely of coccoliths. Their shells were made of calcite extracted from the rich sea-water. As they died, a substantial layer gradually built up over millions of years and, through the weight of overlying sediments, eventually became consolidated into rock. Later earth movements related to the formation of the Alps raised these former sea-floor deposits above sea level.

The chemical composition of chalk is calcium carbonate, with minor amounts of silt and clay. It is formed in the sea by sub-microscopic plankton, which fall to the sea floor and are then consolidated and compressed during diagenesis into chalk rock. 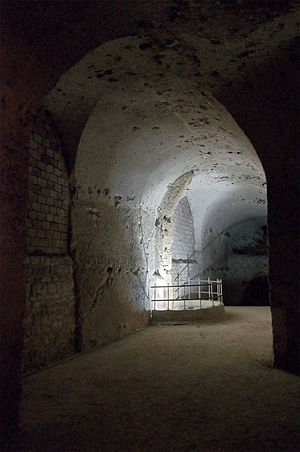 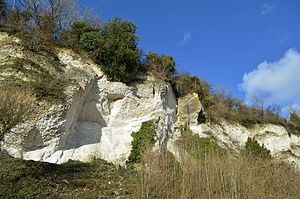 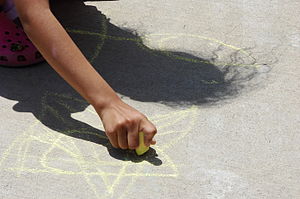 Chalk is a source of quicklime by thermal decomposition, or slaked lime following quenching with water.[1] In southeast England, deneholes are a notable example of ancient chalk pits. Such bell pits may also mark the sites of ancient flint mines, where the prime object was to remove flint nodules for stone tool manufacture. The surface remains at Cissbury are one such example, but perhaps the most famous is the extensive complex at Grimes Graves in Norfolk.

Woodworking joints may be fitted by chalking one of the mating surfaces. A trial fit will leave a chalk mark on the high spots of the corresponding surface. Chalk transferring to cover the complete surface indicates a good fit. Builder's putty also mainly contains chalk as a filler in linseed oil.

Chalk may be used for its properties as a base. In agriculture, chalk is used for raising pH in soils with high acidity. The most common forms are CaCO3 (calcium carbonate) and CaO (calcium oxide). Small doses of chalk can also be used as an antacid. Additionally, the small particles of chalk make it a substance ideal for cleaning and polishing. For example, toothpaste commonly contains small amounts of chalk, which serves as a mild abrasive. Polishing chalk is chalk prepared with a carefully controlled grain size, for very fine polishing of metals.[2] Chalk can also be used as fingerprint powder.

The traditional uses of chalk have in some cases been replaced by other substances, although the word "chalk" is often still applied to the usual replacements. Blackboard chalk is a substance used for drawing on rough surfaces, as it readily crumbles leaving particles that stick loosely to these surfaces. Although traditionally composed of natural chalk, modern blackboard chalk is generally made from the mineral gypsum (calcium sulfate), often supplied in sticks of compressed powder about 10 cm (4 in) long. Sidewalk chalk is similar to blackboard chalk, but it is shaped into larger sticks and often colored. It is used to draw on sidewalks, streets, and driveways. Tailor's chalk is traditionally a hard chalk used to make temporary markings on cloth, mainly by tailors. However, it is now usually made from talc (magnesium silicate).

Chalk was also traditionally used in recreation. In field sports, such as tennis played on grass, powdered chalk was used to mark the boundary lines of the playing field or court. If a ball hits the line, a cloud of chalk or pigment dust will be visible. In recent years, powdered chalk has been replaced with titanium dioxide.[3] In gymnastics, rock-climbing, weight-lifting and tug of war, chalk — now usually magnesium carbonate — is applied to the hands and feet to remove perspiration and reduce slipping.

Chalk may also be used as a house construction material instead of brick or wattle and daub: quarried chalk was cut into blocks and used as ashlar, or loose chalk was rammed into blocks and laid in mortar.[4][5] There are still houses standing which have been constructed using chalk as the main building material. Most are pre-Victorian though a few are more recent.[6]