pronunciation (help·info); 350 – 275 BC)[1][2] was an Indian teacher, philosopher, economist, jurist and royal advisor. He is traditionally identified as Kauṭilya or Vishnu Gupta, who authored the ancient Indian political treatise, the Arthashastra (Economics).[3] As such, he is considered as the pioneer of the field of political science and economics in India, and his work is thought of as an important precursor to classical economics.[4][5][6][7] His works were lost near the end of the Gupta Empire and not rediscovered until 1915.[5]

Originally a teacher at the ancient university of Takshashila, Chanakya assisted the first Mauryan emperor Chandragupta in his rise to power. He is widely credited for having played an important role in the establishment of the Maurya Empire. Chanakya served as the chief advisor to both emperors Chandragupta and his son Bindusara.

Chanakya was born in a Brahmin family.[8] Chanakya's birthplace is a matter of controversy, and there are multiple theories about his origin.[1] According to the Buddhist text Mahavamsa Tika, his birthplace was Takshashila.[9] The Jain scriptures, such as Adbidhana Chintamani, mention him as a Dramila, implying that he was a native of South India.[9][10] According to the Jain writer Hemachandra's Parishishtaparvan, Chanakya was born in the Chanaka village of the Golla region, to a Brahmin named Chanin and his wife Chaneshvari.[11] Other sources mention his father's name as Chanak and state that Chanakya's name derives from his father's name.[12] According to some sources, Chanakya was a Brahmin from North India, scholar in Vedas,[13] and a devotee of Vishnu.[14] According to Jain accounts he became a Jain in his old age like Chandragupta Maurya.[15][16][17]

There is little purely historical information about Chanakya: most of it comes from semi-legendary accounts. Thomas Trautmann identifies four distinct accounts of the ancient Chanakya-Chandragupta katha (legend):[18]

The following elements are common to these legends:

Identification with Kauṭilya or Vishnugupta

The ancient Arthashastra has been traditionally attributed to Chanakya by a number of scholars. The Arthashastra identifies its author by the name Kauṭilya, except for one verse that refers to him by the name Vishnugupta.[19] Kauṭilya is presumably the name of the author's gotra (clan).[20]

One of the earliest Sanskrit literatures to identify Chanakya with Vishnugupta explicitly was Vishnu Sharma's Panchatantra in the 3rd century BC.[21]

K. C. Ojha puts forward the view that the traditional identification of Vishnugupta with Kauṭilya was caused by a confusion of the text's editor and its originator. He suggests that Vishnugupta was a redactor of the original work of Kauṭilya.[3] Thomas Burrow goes even further and suggests that Chanakya and Kauṭilya may have been two different people.[22]

Role in the fall of the Nanda empire

Dhana Nanda's empire, circa 323 BC 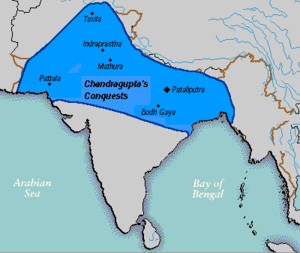 Chandragupta's empire in its early years

Chanakya and Chandragupta have been credited with defeating the powerful Nanda Empire and establishing the new Maurya Empire.

Mudrarakshasa ("The Signet of the Minister"), a play dated variously from the late 4th century to the early 8th century, narrates the ascent of Chandragupta Maurya to power: Sakatala, an unhappy royal minister, introduced Chanakya to the Nanda king, knowing that Chanakya would not be treated well in the court. Insulted at the court, Chanakya untied the sikha (lock of hair) and swore that he would not tie it back till he destroyed the Nanda kingdom. According to Mudrarakshasa, Chandragupta was the son of a royal concubine named Mura and spent his childhood in the Nanda palace. Chanakya and Chandragupta signed a pact with Parvataka (identified with King Porus by some scholars[24]) of north-west India that ensured his victory over the Nanda empire. Kingdom of Nepal provided safe sanctuary to the followers of Chanakya during his operations.[25] Their combined army had Shaka, Yavana (Greek), Kirata, Kamboja and Vahlik soldiers. Following their victory, the territories of the Nanda empire were divided between Parvataka and Chanakya's associate Chandragupta. However, after Parvataka's death, his son Malayaketu sought control of all the former Nanda territories. He was supported by Rakshasaa, the former Nanda minister, several of whose attempts to kill Chandragupta were foiled by Chanakya. As part of their game plan, Chanakya and Chandragupta faked a rift between themselves. As a sham, Chandragupta removed Chanakya from his ministerial post, while declaring that Rakshasa is better than him. Chanakya's agents in Malayaketu's court then turned the king against Rakshasa by suggesting that Rakshasa was poised to replace Chanakya in Chandragupta's court. The activities by Chanakya's spies further widened the rift between Malayaketu and Rakshasa. His agents also fooled Malayaketu into believing that five of his allies were planning to join Chandragupta, prompting Malayaketu to order their killings. In the end, Rakshasa ends up joining Chandragupta's side, and Malayaketu's coalition is completely undone by Chanakya's strategy.

According to the Buddhist texts, Chandragupta was the son of the chief of the Moriya clan of Pippalivana. Chanakya once saw him leading a band of local youth and was highly impressed. He picked Chandragupta as the leader of the anti-Nanda revolt.[24]

Several modern adaptions of the legend narrate the story of Chanakya in a semi-fictional form, extending these legends. In Chandragupta (1911), a play by Dwijendralal Ray, the Nanda king exiles his half-brother Chandragupta, who joins the army of Alexander the Great. Later, with help from Chanakya and Katyayan (the former Prime Minister of Magadha), Chandragupta defeats Nanda, who is put to death by Chanakya.[26]

Twenty-first-century works such as Chanakya (2001) by B. K. Chaturvedi[27] and Chanakya's Chant (2010) by Ashwin Sanghi also present semi-fictional narratives of Chanakya's life. According to these, Chanakya's father Chanak was a friend of Shaktar, the Prime Minister of the Magadha kingdom, and Chanakya loved Shaktar's daughter Suvashini. Shaktar had lost much of his political clout to another courtier called Rakshasa, and one night, Shaktar was imprisoned by the King Dhana Nanda. The rivalry of the Chanakya's family with King Dhana Nanda started when Chanak openly criticised the misrule of the king. After the execution of Chanak by the King, the former Magadha minister Katyayan sent Chanakya to Acharya Pundarikaksha of Takshashila. Chanakya completed his education at Takshashila and became a teacher there. After some years, he returned to Pataliputra to meet his mother, only to learn that she was dead. He also learnt that the Nanda administration had further deteriorated under the growing influence of Rakshasa, who had made Suvashini his mistress. When Chanakya visited the royal court to advise him, he was insulted and imprisoned by the king. Chanakya was rescued by the men of General Maurya, another person who despised with the king's rule. Chanakya took Chandragupta Maurya to Takshashila, where he trained the young man. King Ambhi, the ruler of Takshashila, had allied with the invader Alexander the Great to defeat Parvataka. Chanakya and Chandragupta gathered a band of people discontented with Ambhi's rule and formed an alliance with Parvataka to defeat the Nanda king. Their initial attempts at conquering Magadha were unsuccessful. Once, Chanakya came across a mother scolding her child for burning himself by eating from the middle of a bowl of porridge rather than the cooler edge. Chanakya realized his initial strategic error: he was attacking Magadha, the center of the Nanda territory. He then changed his strategy and focused on capturing the areas located at the peripharies of the Nanda empire. With help from Suvashini, he drove a wedge between the king and Rakshasa. Finally, he defeated the last Nanda king and established a new empire with Chandragupta Maurya as the emperor.

After the establishment of the Maurya Empire

Chanakya continued to serve as an advisor to Chandragupta after the establishment of the Maurya Empire. According to a popular legend mentioned in Jain texts, Chanakya used to add small doses of poison to the food eaten by Emperor Chandragupta Maurya (mithridatism) in order to make him immune to the poisoning attempts by the enemies.[28][29] Unaware, Chandragupta once fed some of his food to his queen, Durdhara, who was seven days away from delivery. The queen, not immune to the poison, collapsed and died within a few minutes. In order to save the heir to the throne, Chanakya cut the queen's belly open and extracted the foetus just as she died. The baby was named Bindusara, because he was touched by a drop (bindu) of blood having poison.[30][31] Chanakya served as an advisor to Bindusara for some years.

According to one legend, Chanakya retired to the jungle and starved himself to death.[32] According to another legend mentioned by the Jain writer Hemachandra, Chanakya died as a result of a conspiracy by Subandhu, one of Bindusara's ministers. Subandhu, who did not like Chanakya, told Bindusara that Chanakya was responsible for the murder of his mother. Bindusara asked the nurses, who confirmed the story of his birth. Bindusara was horrified and enraged. When Chanakya, who was an old man by this time, learned that the King was angry with him, he decided to end his life. In accordance with the Jain tradition, he decided to starve himself to death. By this time, the King had found out the full story which was that Chanakya was not responsible for his mother's death, which was an accident. He asked Subandhu to convince Chanakya to give up his plan to kill himself. However, Subandhu instead conducted a ceremony for Chanakya only to burn him alive.[33]

The Arthashastra discusses monetary and fiscal policies, welfare, international relations, and war strategies in detail. The text also outlines the duties of a ruler.[35] Some scholars believe that Arthashastra is actually a compilation of a number of earlier texts written by various authors, and Chanakya might have been one of these authors (see above).[18]

Chanakya Niti is a collection of aphorisms, said to be selected by Chanakya from the various shastras.[34]

Arthashastra is serious manual on statecraft, on how to run a state, informed by a higher purpose, clear and precise in its prescriptions, the result of practical experience of running a state. It is not just a normative text but a realist description of the art of running a state.

Chanakya is regarded as a great thinker and diplomat in India. Many Indian nationalists regard him as one of the earliest people who envisaged the united India spanning the entire subcontinent. India's former National Security Advisor Shiv Shankar Menon praised Chanakya's Arthashastra for its clear and precise rules which apply even today. Furthermore, he recommended reading of the book for broadening the vision on strategic issues.[36]

The diplomatic enclave in New Delhi is named Chanakyapuri in honour of Chanakya. Institutes named after him include Training Ship Chanakya, Chanakya National Law University and Chanakya Institute of Public Leadership. Chanakya circle in Mysore has been named after him.