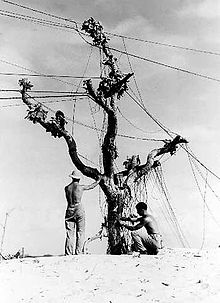 In telecommunications and computer networking, a communication channel or channel, refers either to a physical transmission medium such as a wire, or to a logical connection over a multiplexed medium such as a radio channel. A channel is used to convey an information signal, for example a digital bit stream, from one or several senders (or transmitters) to one or several receivers. A channel has a certain capacity for transmitting information, often measured by its bandwidth in Hz or its data rate in bits per second.

Communicating data from one location to another requires some form of pathway or medium. These pathways, called communication channels, use two types of media: cable (twisted-pair wire, cable, and fiber-optic cable) and broadcast (microwave, satellite, radio, and infrared). Cable or wire line media use physical wires of cables to transmit data and information. Twisted-pair wire and coaxial cables are made of copper, and fiber-optic cable is made of glass.

In information theory, a channel refers to a theoretical channel model with certain error characteristics. In this more general view, a storage device is also a kind of channel, which can be sent to (written) and received from (read).

Examples of communications channels include:

All of these communications channels share the property that they transfer information. The information is carried through the channel by a signal.

A channel can be modelled physically by trying to calculate the physical processes which modify the transmitted signal. For example in wireless communications the channel can be modelled by calculating the reflection off every object in the environment. A sequence of random numbers might also be added in to simulate external interference and/or electronic noise in the receiver.

Statistical and physical modelling can be combined. For example in wireless communications the channel is often modelled by a random attenuation (known as fading) of the transmitted signal, followed by additive noise. The attenuation term is a simplification of the underlying physical processes and captures the change in signal power over the course of the transmission. The noise in the model captures external interference and/or electronic noise in the receiver. If the attenuation term is complex it also describes the relative time a signal takes to get through the channel. The statistics of the random attenuation are decided by previous measurements or physical simulations.

Channel models may be continuous channel models in that there is no limit to how precisely their values may be defined.

Communication channels are also studied in a discrete-alphabet setting. This corresponds to abstracting a real world communication system in which the analog->digital and digital->analog blocks are out of the control of the designer. The mathematical model consists of a transition probability that specifies an output distribution for each possible sequence of channel inputs. In information theory, it is common to start with memoryless channels in which the output probability distribution only depends on the current channel input.

A channel model may either be digital (quantified, e.g. binary) or analog.

In a digital channel model, the transmitted message is modelled as a digital signal at a certain protocol layer. Underlying protocol layers, such as the physical layer transmission technique, is replaced by a simplified model. The model may reflect channel performance measures such as bit rate, bit errors, latency/delay, delay jitter, etc. Examples of digital channel models are:

In an analog channel model, the transmitted message is modelled as an analog signal. The model can be a linear or non-linear, time-continuous or time-discrete (sampled), memoryless or dynamic (resulting in burst errors), time-invariant or time-variant (also resulting in burst errors), baseband, passband (RF signal model), real-valued or complex-valued signal model. The model may reflect the following channel impairments:

These are examples of commonly used channel capacity and performance measures:

From the above 4 basic multi-terminal channels, multiple access channel is the only one whose capacity region is known. Even for the special case of the Gaussian scenario, the capacity region of the other 3 channels except the broadcast channel is unknown in general.