Charles William Foster Jr. (12 April 1828 – 9 January 1904) was a U.S. Republican politician from Ohio. Foster was the 35th Governor of Ohio, and later went on to serve as Secretary of the Treasury under Benjamin Harrison. 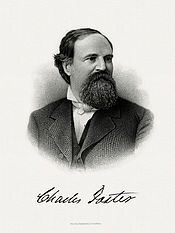 Bureau of Engraving and Printing portrait of Foster as Secretary of the Treasury.

Foster was born outside of Tiffin, Ohio, and grew up in the western Seneca County boomtown of Rome. This town would merge in 1854 with the nearby town of Risdon to form one city, named Fostoria in honor of Charles W. Foster, Sr., his father.

He was elected to the United States House of Representatives in 1870, serving from 1871 to 1879. He was defeated for re-election in 1878, but was elected to the governorship a year later, serving two two-year terms between 1880 and 1884. Foster was unsuccessful in a bid to return to the House in 1890, but was appointed by Benjamin Harrison a year later to become Secretary of the Treasury upon the death of William Windom. Foster served out the remainder of Harrison's term before retiring. From 1891 to 1893, future Postmaster General Robert Wynne served as his personal secretary.

Charles Foster was married November 7, 1853 to Ann M. Olmstead of Fremont, Ohio. They had two daughters, Jessie and Anna.[1]

In January 1904, Foster planned to attend the inauguration of Governor Myron T. Herrick. He stopped overnight at the home of his old friend, General J. Warren Keifer, in Springfield, Ohio. He died at Keifer's home the next day, January 9, 1904.[2]