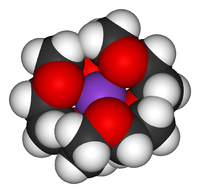 Charles John Pedersen (October 3, 1904 – October 26, 1989) was an American organic chemist best known for describing methods of synthesizing crown ethers. He shared the Nobel Prize in Chemistry in 1987 with Donald J. Cram and Jean-Marie Lehn. His Japanese first name was Yoshio (良男?).[1] He is the only Nobel Prize laureate born in Korea other than Peace Prize laureate Kim Dae-jung.[2]

Pedersen was born in Busan, on the coast of south-eastern Korea, to a Norwegian father Brede Pedersen and a Japanese mother Takino Yasui, in 1904. He moved to Japan with his family at the age of 8 years to attend a convent school in Nagasaki. When he was 10 years old, he moved to Yokohama and entered an international school, called Saint Joseph College. He came to the United States in 1922 to study chemical engineering at the University of Dayton in Ohio. After receiving a bachelor's degree, he went to the Massachusetts Institute of Technology where he received a master's degree in organic chemistry. Although his professors encouraged him to pursue a Ph.D. at MIT, Pedersen decided to start his career instead, partially because he no longer wanted to be supported by his father. He is one of the few people to win a Nobel Prize in the sciences without having a Ph.D.[1]

In 1927, Pedersen began working for DuPont where he would remain for the next 42 years, retiring at the age of 65. At DuPont, his work resulted in 25 papers and 65 patents. In 1967 he published two works that are now considered classics;[3] they describe the methods of synthesizing crown ethers (cyclic polyethers).[4] The donut-shaped molecules were the first in a series of extraordinary compounds that form stable structures with alkali metal ions. In 1987 he shared the Nobel Prize in Chemistry with Donald Cram and Jean-Marie Lehn for his work in this area; Cram and Lehn expanded upon his original discoveries.

Pedersen was diagnosed with myeloma in 1983, and though he was becoming increasingly frail, he traveled to Stockholm to accept the Nobel Prize in late 1987. Shortly thereafter, he was awarded a medal for excellence by the du Pont Research Fellows. He died on 26 October 1989 in Salem, New Jersey.[5]