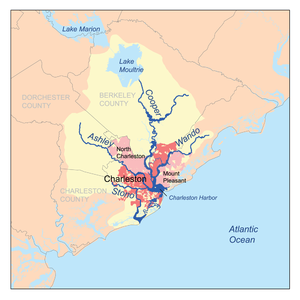 Map of the Charleston Harbor watershed.

The Charleston Harbor is an inlet (8 sq mi/20.7 km²) of the Atlantic Ocean at Charleston, South Carolina. The inlet is formed by the junction of Ashley and Cooper rivers at Lua error in Module:Coordinates at line 668: callParserFunction: function "#coordinates" was not found.. Morris and Sullivan's Islands shelter the entrance. Charleston Harbor is part of the Intracoastal Waterway.[1]

Like most river mouths in the Southeast, the inlet is evidence of a drowned coastline, created by a rise in sea level in recent geologic time.

The 12-foot natural depth of the harbor was a major reason for the establishment and growth of Charleston. The Rivers and Harbors Act of 1852 authorized the federal government to dredge the channels of the harbor to a depth of 17 feet. This deepening work was interrupted by the Civil War, and was not completed until 1860.[3] The jetties at the entrance to the harbor were constructed between 1878 and 1886.[4]

The harbor includes public terminals owned and operated by the South Carolina State Ports Authority, as well as private terminals. Existing federal channels are dredged to an authorized depth of 45 feet below mean lower low water. This depth is too shallow for Post-Panamax ships. The largest ships must carry less cargo, wait for favorable tide conditions, or combine these two approaches to reach port in Charleston. As of 2015[update], the U.S. Army Corps of Engineers began to design a deepening of the channels to 52 feet.[5]