This article is about the institution in New York State. For other uses of "Chautauqua," see Chautauqua (disambiguation).

It was founded in 1874 by inventor Lewis Miller and Methodist Bishop John Heyl Vincent as a teaching camp for Sunday school teachers. The teachers would disembark at Palestine Park, and begin a course of Bible study that used the Park to teach of the geography of the Holy Land.[3]

The Institution has operated each summer since then, gradually expanding its season length and program offerings in the arts, education, religion and recreation. It offers educational activities to the public during the season, with public events including popular entertainment, theater, symphony, ballet, opera and visual arts exhibitions.[citation needed]

The Institution also includes school of Special Studies, and a residential music program of intensive study is offered to students aiming for professional careers who audition for admittance into Chautauqua's schools of fine and performing arts.

The physical setting of the Institution defined its development as an assembly. The grounds are situated on the west shoreline of upper Chautauqua Lake.[4] The early tent camp assembly gave way to cottages and rooming houses, and then hotels and eventually condominiums.

In 1973 the National Park Service added the institution to the National Register of Historic Places. In 1989, the Department of the Interior designated it a National Historic Landmark District, consisting of most of the Institution property between NY 394, formerly NY 17J, the lake and (roughly) Lowell and North avenues.[2][5]

Summer admission to Chautauqua is by "gate ticket" which allows entrance into the grounds, use of Smith Memorial Library, use of public beaches and parks, and attendance at lectures and concerts. There is an additional charge for some courses, for films shown at the Chautauqua Cinema, for opera and theater tickets, and for use of the golf course and tennis courts.

Programs offered during the week at Chatuauqua include devotional services and a lecture on a social, political or academic issue in the morning, an afternoon lecture on a religious topic, and an evening program. This evening Amphitheater event may be a symphony concert by the Chautauqua Symphony Orchestra, a dance program by the Chautauqua Ballet Company, or a program by a special guest artist. During most weeks, there is at least one opportunity to catch an opera and a play, both put on by Chautauqua's resident summer companies. Operas are performed in English at Norton Hall, a 1930s era art deco structure. There are also regularly scheduled organ recitals on the Massey Memorial Organ, student recitals, master classes, forums, and seminars for the sophisticate.

A range of special studies courses in music, art, dance, drama and general topics are also offered. The Chautauqua Schools of Music offer extremely competitive programs on the basis of scholarship. George Gershwin visited Chautauqua as a summer refuge to compose parts of his Concerto in F in a small wooden piano studio.[6]

The 10:45 morning lecture program for each week is built around a theme, such as world events. Chautauqua has been visited by United States Presidents from Ulysses S. Grant to Bill Clinton,[citation needed] and by other prominent Americans including Booker T. Washington, Karl Menninger, Tom Ridge and, in 2006, Al Gore.[7] Franklin D. Roosevelt's historic "I hate war" speech was delivered from the podium in the Chautauqua Amphitheater (1936).[8]

Sundays at Chautauqua feature worship services, both denominational and ecumenical. There is an afternoon Amphitheater program, such as a military band or student dance program. On Sundays, entrance to the Institution grounds is free. Worship services are coordinated by the permanent Department of Religion staff.

There is an annual program held on the first Tuesday of each August called "Old First Night." This is the "birthday party" for the Institution, marking the anniversary of the opening of the first season in 1874.[9]

One of the oldest day camps in the United States is the Chautauqua Boys and Girls Club, founded in 1893. The Children's School established in 1921, is a developmental preschool for youth ages 3–5, and was a pioneering program in the field of nursery school education. The program includes a social, recreational and educational activities which often incorporate other Chautauqua programs in the areas of music, drama and art.

The Institution's grounds, located between New York State Route 394 and Chautauqua Lake, include public buildings (such as the 6,000-seat Amphitheater), administrative offices, a library, a movie theater, a bookstore, hotels, condominiums, inns, rooming houses, and many private cottages. There are about 400 year-round residents, but in the summer the population can be up to 10,000 at a time.[citation needed] The Institution is largely a pedestrian community, with bikes and scooters widely used and a 12 mph speed limit for cars. There are several parking lots located on the periphery of the grounds. 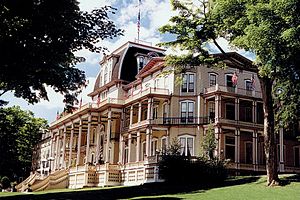 The Athenaeum Hotel on the grounds is the only hotel actually owned and operated by the Institution. The 156-room hotel, said to be the largest wooden building in the eastern United States, was built in the Second Empire style in 1881. It has a two-story porch supported by narrow columns, with a central, mansard-covered tower.[10] Although the number of hotel rooms has steadily declined on the grounds in the past thirty years, there has been a corresponding growth in condominiums.

Palestine Park is a relief map of Palestine, showing the general contour of the area, including mountains, valleys, water-courses and cities.

File:Miller bell tower.JPG
The Miller Bell Tower, drawing of which is the logo of the Chautauqua Institution

The Chautauqua Prize is an annual American literary award established by the Chautauqua Institution in 2012.[11] The winner receives US$7,500 and all travel and expenses for a one-week summer residency at Chautauqua.[11] It is a "national prize that celebrates a book of fiction or literary/narrative nonfiction that provides a richly rewarding reading experience and honors the author for a significant contribution to the literary arts."[12]

The Chautauqua movement spread throughout the United States and was highly popular until the start of the World War II. By the mid-1920s, when circuit Chautauquas were at their peak, they appeared in over 10,000 communities to audiences of more than 45 million; by about 1940 they had run their course.

The Chautauqua Literary and Scientific Circle (CLSC), founded in 1878 by Bishop Vincent, is America's oldest continuously operating book club.[13] It was founded to promote self-learning and study, particularly among those unable to attend higher institutions of learning. Six to nine books are added to the reading list each year, with authors generally coming to Chautauqua to discuss their writing and to talk with readers.