From Infogalactic: the planetary knowledge core
Jump to: navigation, search
This article is about a major city in Russia. For the town previously known as Chelyabinsk-40 and Chelyabinsk-65, see Ozyorsk, Chelyabinsk Oblast.

The fortress of Chelyaba, from which the city takes its name, was founded at the location of the Bashkir village of Chelyaby(Bashkir: Силәбе) by colonel Alexey (Kutlu-Muhammed) Tevkelev to protect the surrounding trade routes from possible attacks by Bashkir outlaws. During Pugachev's Rebellion, the fortress withstood a siege by the rebel forces in 1774, but was eventually captured for several months in 1775. In 1782, as a part of Ufa Viceroyalty that was later reformed into Orenburg Governorate, Chelyabinsk became a seat of a its own uyezd and finally was granted town status and its current name in 1787. 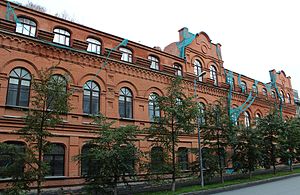 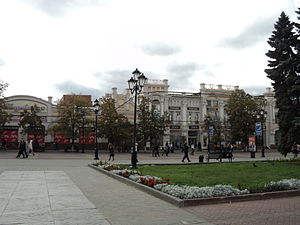 Until the late 19th century, Chelyabinsk was a small provincial town. In 1892, the Samara-Zlatoust Railway was completed which connected it with Moscow and the rest of European Russia. Also in 1892, construction of the Trans-Siberian Railway from Chelyabinsk started and in 1896 the city was linked to Ekaterinburg. Chelyabinsk became the hub for relocation to Siberia. For fifteen years more than fifteen million people - a tenth of Russia - passed through Chelyabinsk. Some of them remained in Chelyabinsk, which contributed to its rapid growth. In addition, in Chelyabinsk was organized custom office set "customs fracture" the bounding duty-free grain and tea to the European part of the country that led to the emergence in mills and set the tea-packing factory. Soon Chelyabinsk started turning into a major trade center, its population reached 20,000 inhabitants by 1897, 45,000 by 1913, and 70,000 by 1917. For rapid growth at the turn of the 20th century, similar to American cities, Chelyabinsk called "Behind the Urals Chicago".[14]

During the first Five-Year Plans of the 1930s, Chelyabinsk experienced rapid industrial growth. Several establishments, including the Chelyabinsk Tractor Plant and the Chelyabinsk Metallurgical Plant, were built at this time. During World War II, Joseph Stalin decided to move a large part of Soviet factory production to places out of the way of the advancing German armies in late 1941. This brought new industries and thousands of workers to Chelyabinsk. Facilities for the production of T-34 tanks and Katyusha rocket launchers existed in Chelyabinsk. During World War II, it produced 18,000 tanks, and 48,500 tank diesel engines as well as over 17 million units of ammunition. In the press of the time Chelyabinsk was informally called "Tankograd" or "Tank City". The S.M. Kirov Factory no. 185 moved here from Leningrad to produce heavy tanks; it was transferred to Omsk after 1962.

Shortly after dawn on February 15, 2013, a superbolide meteor descended at over 55,000 kilometers per hour (34,000 mph) over the Ural Mountains, exploding at an altitude of 25–30 kilometers (16–19 mi)[dubious – discuss] in a momentary flash as bright as the sun and generating a shock wave that injured over a thousand people. Fragments fell in and around Chelyabinsk. Interior Ministry spokesman Vadim Kolesnikov said 1,100 people had called for medical assistance following the incident, mostly for treatment of injuries from glass broken by the explosions. One woman suffered a broken spine.[15] Kolesnikov also said about 600 square meters (6,000 sq ft) of a roof at a zinc factory had collapsed. A spokeswoman for the Emergency Ministry told the Associated Press that there was a meteor shower, but another ministry spokeswoman was quoted by the Interfax news agency as saying it was a single meteor.[16][17][18] The size has been estimated at 17 meters (56 ft) diameter with a mass of 10,000[19][20] or 11,000[21] tonnes. The power of the explosion was about 500 kilotons of TNT (about 1,8 PJ), which is 20-30 times more energy than was released from the atomic bomb exploded in Hiroshima. Only thanks to the high altitude of the explosion did the city manage to avoid large casualties and destruction. 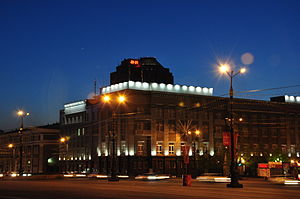 The building of the Legislative Assembly of Chelyabinsk Oblast

Chelyabinsk is located east of the Ural Mountains, 199 km south of Yekaterinburg. Its elevation is 200–250 meters.

The city is bisected by the river Miass which is regarded as the border between the Urals and Siberia. This is reflected in the geology of the place, with low granite hills of the Urals on the western side and lower sedimentary rock of the West Siberian Plain on the eastern side.

The "Leningrad bridge" connects the two sides, so it is called the "bridge of the Urals to Siberia". Chelyabinsk itself is therefore also known as "The Gateway to Siberia".[23]

Like Rome, Constantinople, and Moscow, Chelyabinsk is said to be located on seven hills.[24]

Chelyabinsk skyline with the river Miass in the center.

The architecture of the Chelyabinsk is determined by the change of historical eras in the development of Russia. Before the revolution of 1917 the city was a trading centre, with numerous merchant buildings in style eclecticism and modern with elements Russian Revival architecture, they are stored on a pedestrian street Chelyabinsk “Kirovka”. Since the late '30s in the city came a new era associated with construction of monumental buildings in the Stalinist architecture. It is in this style is constructed in substantially the center of the city of Chelyabinsk and central avenue.[28]

With 60 years in the city was conducted intensive housing construction tower blocks. During this period the city had reached a population of one million people, and on his map there is such a large residential area as the "Severo-Zapad" (English: North-West). 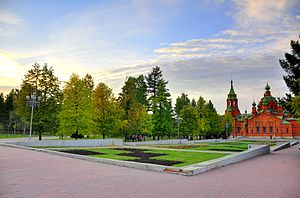 Since the '90s, market reforms, the city began an intensive construction of office buildings for business and major shopping malls in style postmodern architecture and high-tech.

Chelyabinsk has 17 public parks. The largest of them is one of the best in Russia - Chelyabinsk Central Park, named after Gagarin.[29] Its territory is saved in the urban forest, where, among pine trees and granite rocks there are several picturesque ex-quarries now flooded with water. Chelyabinsk Watch Factory "Molnija" produces pocket, souvenir watches and technical watches for aircraft and ships. In 1980, the clock "Molnija" were given as gifts to participants of the Moscow Olympics Games.[32]

Agro-industrial company "Makfa", Russia's largest producer of pasta, one of the five largest world producers of pasta. "Unichel" shoe firm is the largest manufacturer of footwear in Russia. Agricultural firm "Ariant" - leader in the production of meat products in the Urals Federal District of Russia, produces alcoholic and non-alcoholic beverages. American multinational corporation «Emerson» buying up shares of local businesses "Metran" organized in Chelyabinsk engineering center, building a factory for the production of industrial devices and equipment.[33] 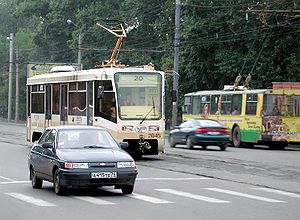 Tram and trolleybus in Chelyabinsk

In recent years, Chelyabinsk significant role in the economy of the early play services, banking and insurance activities, logistics centers, tourism. The city is the central offices of major regional banks as "Chelindbank" and "Chelyabinvestbank". 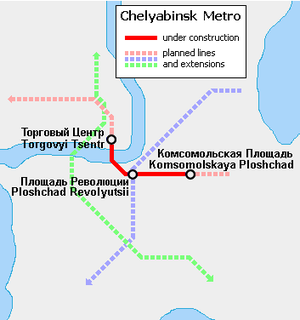 Public transport of Chelyabinsk is represented by a bus lines network (since 1925), tram (1932) and trolleybus (1942) systems, as well as private marshrutka (routed cab) services. The city has several taxi companies.

In 2014 in Chelyabinsk began to run electric buses (hybrid trolleybus and electric car).[34]

Beeline and Chelyabinsk city electric transport in 2011 signed an agreement to provide passengers free internet. Currently Wi-Fi is available in some public trams and trolleybuses in Chelyabinsk.

Chelyabinsk started construction of a three-line subway network in 1992.[35]

The city is served by the Chelyabinsk Airport. 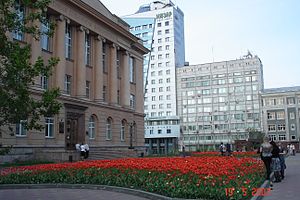 The city has several libraries, including Chelyabinsk Regional Universal Scientific Library, with more than 2 million books, including more than 12,000 rare books and monuments (17th to 19th centuries), is the largest public library in the Chelyabinsk oblast. 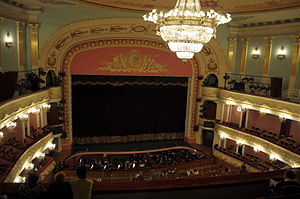 There are nine museums in Chelyabinsk. Chelyabinsk regional museum was founded in 1913, and holds about 300 thousand exhibits. There are expositions of the ancient settlement Arkaim age 3rd to 2nd millennium BC relating to the "Land of Cities", the largest fragment of the Chelyabinsk meteor, weighing 570 kg, famous decorated edged weapons of the 19th and 20th centuries, made by Zlatoust arms factory, exhibits Kasli artistic cast iron and much more. Chelyabinsk Region Picture Gallery has more than 11,000 works. Meeting up collections of art in Europe and the East (International Art), the national art of the Middle Ages, modern and contemporary, modern art. The peculiarity of the meeting are collections of icons (16th to 20th centuries), early printed books and manuscripts. The museum of railway equipment of the South Ural railway presented more than 30 exhibits of vehicles used on the rail after it in Chelyabinsk in 1892. Museum of military equipment in the garden of Victory Sika deer in the Chelyabinsk Zoo 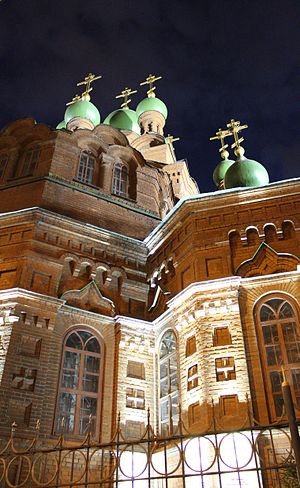 Museum of military equipment in the garden of Victory was founded in 2007. It is 16 eksponantov, including T-34, IS-3 tanks and multiple rocket launchers "Katyusha" issued in Chelyabinsk during World War II.

Chelyabinsk Zoo - Zoological Park, located in the central region of Chelyabinsk. On an area of 30 hectares there are more than 110 species, of which more than 80 listed in the Red List. Zoo participates in international programs for the conservation of endangered species, including Amur (Siberian) tigers, Far Eastern leopards and Polar bears. The zoo regular sightseeing tours, lectures, exhibitions and celebrations.

City also has a circus building.

In Chelyabinsk has Concert Hall. Prokofiev Hall of organ and chamber music with organ-known German company "Hermann Eule". The tool consists of 2504 pipes, 37 registers, three manuals and pedal keyboard. His sound is a rare gentleness and generosity sound basic votes. Chelyabinsk body many artists considered to be one of the best in Russia and Europe.

In the city of Chelyabinsk are several churches built in the 19th to 21st centuries.

Chelyabinsk is twinned with: