Chelyabinsk Oblast (Russian: Челя́бинская о́бласть, Chelyabinskaya oblast) is a federal subject (an oblast) of Russia in the Ural Mountains region, on the border of Europe and Asia.[11][12][13][14] Its administrative center is the city of Chelyabinsk. Population: 3,476,217 (2010 Census).[7]

During the Middle Ages South Ural was populated by Bashkir tribes that were a part of the Golden Horde, Nogai Horde and smaller Bashkir unions. Since the late 16th century the area was incorporated into the Tsardom of Russia. Russian colonization of Chelybinsk Oblast started only in the 18th century with the establishment of a system of fortresses and trade posts on then Russian border under the authority of the Orenburg Expedition (created in 1734). Many cities of Chelyabinsk Oblast including the city of Chelyabinsk itself trace their history back to those forts.

In 1743 Chelyabinsk fortress became a center of the Iset Province, a constituent part of the Orenburg Governorate (a direct successor of the Orenburg Expedition) since 1744. 1750-1770s saw the emergence of industrial enterprises in South Ural. First factory centred towns like Miass, Kyshtym and Zlatoust were founded back then. After healing the wounds left by the Pugachev's Rebellion in South Ural lands of the modern day Chelyabisnk Oblast started to attract more people from the European part of Russia. By the mid-19th century Chelyabinsk was a major trade center of Ural and after the construction of the Trans-Siberian Railway in 1890s it elevated its status becoming an important transport hub that connected Siberia with the rest of the Russian Empire.

In 1919 eastern parts of the Orenburg Governorate added with Kurgan of the Tobolsk Governorate became a separate Chelyabinsk Governorate making Chelyabinsk a regional capital for the first time. During those years population of the new region was already bigger than one million people. In 1923 together with Perm, Yekaterinburg and Tyumen governorates it was merged into a single Ural Oblast that lasted less than ten years, until 1934. In January 17, 1934 the Chelyabinsk Oblast was finally established. It took its current shape when the Kurgan Oblast was detached from it in 1943.

During the 1930s, the Chelyabinsk Oblast became one of the hot spots of first Five-Year Plans. The core enterprises of modern Chelyabinsk economy including Magnitogorsk Iron and Steel Works, Chelyabinsk Tractor Plant and Chelyabinsk Metallurgical Plant were founded during those years. Since the beginning of the Great Patriotic War, the economy of the region started to grow even faster with the evacuation of industries from the western parts of the Soviet Union to Ural and the Chelyabinsk Oblast in particular. During the war, Magnitogorsk produced 1/3 of the Soviet steel, while the city of Chelyabinsk became the main center of Soviet tank production, earning the nickname "Tankograd" (Tank City).

Chelyabinsk Oblast has had a long association (since the 1940s) with top-secret nuclear research. A number of production reactors were located in Chelyabinsk early in the Cold War. There is no nuclear power in Chelyabinsk however. A serious nuclear accident occurred in 1957 at the Mayak nuclear fuel reprocessing plant, 150 km north-west of the city, which caused deaths in Chelyabinsk Oblast but not in the city. The province was closed to all foreigners until 1992 allowing only a British medical team following a two-train rail explosion in the mid-1980s. "Chelyabinsk:The Most Contaminated Spot on the Planet" was a documentary made by Slawomir Grunberg about the unsafe dumping of radioactive waste first in the river Techa, then in Lake Karachay. 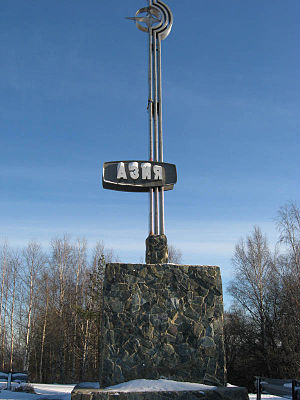 Border of Europe and Asia on the European route E30

The region is situated in the Southern Urals, near Kurgan and Sverdlovsk oblast. Notional boundary between Europe and Asia is carried out mainly by dividing ridges of the Ural Mountains. Near the station Urzhumka (8 km from Zlatoust), the pass Uraltau, there is a stone pillar. On one of its sides is written "Europe", on the other - "Asia". Zlatoust city, Katav-Ivanovsk, Satka are in Europe. Chelyabinsk, Troitsk, Miass - in Asia, Magnitogorsk - in both parts of the world.

Area of the Chelyabinsk oblast is 88.5 thousand square kilometers. Length from north to south - 490 km from west to east - 400 km. Chelyabinsk oblast in the territory in 5th place from 8 regions of the Urals and the 39th place in Russia. The total length of the border is 2750 km.

Chelyabinsk oblast has a very diverse landscape. It was formed over millions of years. Within the Chelyabinsk oblast there are various areas - from the lowlands and hilly plains to mountain ranges, peaks exceeding 1,000 m highest point of the area - Nurgush mountain (1406 m).

In the mountainous area has several ski resorts.

Within the region originate numerous rivers belong to the basins of the Kama, Tobol and Ural. Since here, mainly their upper, so they are shallow. Rivers longer than 10 km there in 348, their total length of 10 235 km.

Length of over 100 km are only 17 rivers. And only seven rivers Miass, Uy, Ural, Ay, Ufa, Uvelka, Gumbeyka - are within the scope of a length greater than 200 km.

Chelyabinsk oblast believe - lake edge. The region has more than 3748 lakes, the total floor area of 2125 square meters. km. Most of the lakes located in the north and east of the region. 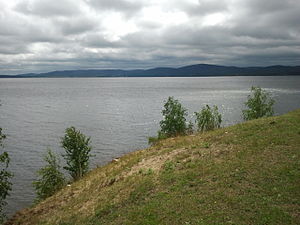 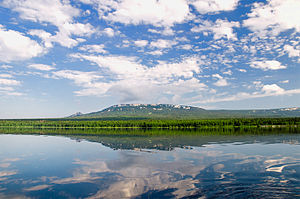 In the mountain forest zone one of the most notable is the lakes Zyuratkul lying at an altitude of 724 m in the eastern foothills - a group of remarkable beauty of lakes that make up the pride of the South Urals - B.Kisegach, Uvildy, Turgoyak, spruce and others, on the banks which built numerous resorts. The main group of lakes located on Zauralskaya hilly plain and within the West Siberian Plain.

Origin of different lakes. Eastern foothills of the lake have their origin in the tectonics. Water accumulated in tectonic failures (basins). These lakes are distinguished not only for its size, extremely complex outlines the coast, but also its depth, often reaching 30–40 m. Other origin lake-steppe and steppe zones. Most of the largest member of the erosion-tectonic type.

Beautiful scenery of mountain lakes contribute to the development of tourism in the region.

Seat of the Oblast government in Chelyabinsk

During the Soviet period, the high authority in the oblast was shared between three persons: The first secretary of the Chelyabinsk CPSU Committee (who in reality had the biggest authority), the chairman of the oblast Soviet (legislative power), and the Chairman of the oblast Executive Committee (executive power). Since 1991, CPSU lost all the power, and the head of the Oblast administration, and eventually the governor was appointed/elected alongside elected regional parliament.

The Charter of Chelyabinsk Oblast is the fundamental law of the region. The regional parliament, Legislative Assembly of Chelyabinsk Oblast is the province's standing legislative (representative) body. The Legislative Assembly exercises its authority by passing laws, resolutions, and other legal acts and by supervising the implementation and observance of the laws and other legal acts passed by it. The highest executive body is the Oblast Government, which includes territorial executive bodies such as district administrations, committees, and commissions that facilitate development and run the day to day matters of the province. The Oblast administration supports the activities of the Governor who is the highest official and acts as guarantor of the observance of the oblast Charter in accordance with the Constitution of Russia.

The oblast is highly urbanized.

On 15 February 2013, a 10,000 ton meteoroid entered the Earth's atmosphere over Russia at about 09:20 YEKT (03:20 UTC). It passed over the southern Ural region and exploded in an air burst over Chelyabinsk Oblast. About 1,500 people were reported injured, including 311 children. Health officials said 112 people had been hospitalized, mainly by glass from windows shattered by a shock wave; two were reported to be in serious condition. As many as 3,000 buildings in six cities across the region were damaged by the explosion and impacts. The meteor created a dazzling light as it air burst, bright enough to cast shadows during broad daylight in Chelyabinsk.