From Infogalactic: the planetary knowledge core
Jump to: navigation, search
For other uses, see Chemnitz (disambiguation).

listen), Upper Sorbian: Kamjenica, Czech: Saská Kamenice, Polish: Kamienica Saska), known from 1953 to 1990 as Karl-Marx-Stadt, is the third-largest city in the Free State of Saxony, Germany. Chemnitz is an independent city which is not part of any county and seat of the Freistaat Sachsen. Located in the northern foothills of the Ore Mountains, it is part of the Central German Metropolitan Region. The city's economy is based on the service sector and manufacturing industry. Chemnitz University of Technology has around 10,000 students.

Chemnitz is named after the river Chemnitz, a small tributary of the Zwickauer Mulde. The word "Chemnitz" is from the Sorbian language (Upper Sorbian: Kamjenica), and means "stony [brook]". The word is composed of the Slavic word kamen meaning "stone" and the feminine suffix -ica. It is known in Czech as Saská Kamenice and in Polish as Kamienica Saska. There are many other towns named Kamenica or Kamenice in areas with past or present Slavic settlement. 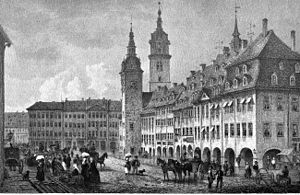 An early Slavic tribe's settlement was located at Kamienica, and the first documented use of Chemnitz was the 1143 site of a Benedictine monastery around which a settlement grew. Circa 1170 Frederick I, Holy Roman Emperor granted it the rights of an imperial city. In 1307, the town became subordinate to the margraviate of Meissen (the predecessor of the Saxon state). In Medieval Times Chemnitz became a centre of textile production and trade. More than one third of the population worked in textile production.

By the early 19th century Chemnitz had become an industrial centre (sometimes called "the Saxon Manchester"). In 1913, Chemnitz had a population of 320,000 and, like Leipzig and Dresden, was larger at that time than today. After losing inhabitants due to the first World War Chemnitz grew rapidly again and reached its all-time peak of 360,250 inhabitants in 1930. Before the world economic crises, it was supposed[by whom?] that the city would keep on growing and would become a "Millionenstadt" (engl. Megacity, literally: city with at least one million inhabitants) by incorporating also fast growing smaller towns and municipalities around it.

During World War II, Chemnitz contained factories that produced military hardware and a Flossenbürg forced labor subcamp (500 female inmates) for Astra-Werke AG.[2] The oil refinery was a target for bombers during the Oil Campaign of World War II, and Operation Thunderclap attacks included the following raids:

The headquarters of the auto manufacturer Auto Union were also based in Chemnitz since 1932 and its buildings were also badly damaged. At the end of the war, the company's executives fled and relocated the company in Ingolstadt, Bavaria, where it evolved into Audi, now a brand within the Volkswagen group.

The World War II bombings left most of the city in ruins,[citation needed] and post-war, the East German reconstruction included large low rise (and later high-rise plattenbau) housing. Some tourist sites were reconstructed during the East German era and after German reunification. It was occupied by Soviet troops on 8 May 1945.

After dissolution of the states in the GDR in 1952, Chemnitz became seat of a district (bezirk). On 10 May 1953, the city was renamed by decision of the East German government to Karl-Marx-Stadt. GDR Prime Minister Otto Grotewohl said:

"The people who live here, do not look back, but look forward to a new and better future. They look at socialism. They look with love and devotion to the founder of the socialist doctrine, the greatest son of the German people, to Karl Marx. I hereby fulfill about the government's decision. I carry out the solemn act of renaming the city and declare: From now on, this city bears the proud name and mandatory Karl-Marx-Stadt".[4]

After the city center was destroyed in World War II, the East German authorities strove to rebuild it to symbolize the conceptions of urban development of a socialist city. The then layout of the city center was rejected in favor of a new road network. However, the original plans were not completed. In addition, the rapid development of housing took priority over preservation of old buildings. So in the 1960s and 1970s, both in the center as well as in peripheral areas, large areas were built in Plattenbau apartment-block style, for example Yorckstraße. The old buildings of the period, which still existed in Kassberg, Sonnenberg and Schlosschemnitz especially, were neglected and fell increasingly derelict. 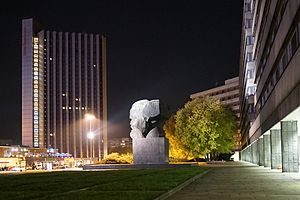 After the reunification of Germany on 3 October 1990, the city of Chemnitz faced several difficult tasks. Many inhabitants migrated to the former West Germany and unemployment in the region increased sharply; in addition Chemnitz had no downtown, but it was increasingly demanded,[5] while simultaneously large shopping centers were constructed on the city periphery to the early 1990s.

Chemnitz is the only major German city, whose center was re-planned after 1990, similar to the reconstruction of several other German cities in the immediate post-war years. Plans for the recovery of a compressed city center around the historic town hall in 1991 led to an urban design competition. This was announced internationally by the city and carried out with the help of the partner city of Düsseldorf. The mooted project on an essentially unused area of the former city would be comparable in circumference with the Potsdamer Platz in Berlin.[5]

Numerous internationally renowned architects such as Hans Kollhoff, Helmut Jahn and Christoph Ingenhoven provided designs for a new city center. The mid-1990s began the development of the inner city brownfields around the town hall to a new town. In Chemnitz city more than 66,000 square meters of retail space have emerged. With the construction of office and commercial building on the construction site "B3" at the Düsseldorf court, the last gap in 2010 was closed in city center image. The intensive development included demolition of partially historically valuable monuments from the period and was controversial.[6][7] Between 1990 and 2007 more than 250 monuments were leveled.

Tourist sights include the Kassberg neighborhood with 18th and 19th century buildings and the Karl Marx Monument by Lev Kerbel, nicknamed "Nischel" (a Saxon dialect word for head) by the locals. Landmarks include the Old Town Hall with its Renaissance portal (15th century), the castle on the site of the former monastery, and the area around the opera house and the old university. The most conspicuous landmark is the red tower built in the late 12th or early 13th century as part of the city wall.

The Chemnitz petrified forest is located in the courtyard of Kulturkaufhaus Tietz. It is one of the very few in existence, and dates back several million years. Also within the city limits, in the district of Rabenstein, is the smallest castle in Saxony, Rabenstein Castle.

The city has changed considerably since German reunification. Most of its industry is now gone and the core of the city has been rebuilt with many shops as well as huge shopping centres. Many of these shops are international brands, including Zara, H & M, Esprit, Galeria Kaufhof, Leiser Shoes, and Peek & Cloppenburg. The large "Galerie Roter Turm" (Red Tower) shopping centre is very popular with young people.

The Chemnitz Industrial Museum is an Anchor Point of ERIH, the European Route of Industrial Heritage.

The Museum Gunzenhauser, formerly a bank, opened on 1 December 2007. Dr Alfred Gunzenhauser, who lived in Munich, had a collection of some 2,500 pieces of modern art, including many paintings and drawings by Otto Dix, Karl Schmidt-Rottluff and others. The Botanischer Garten Chemnitz is a municipal botanical garden, and the Arktisch-Alpiner Garten der Walter-Meusel-Stiftung is a non-profit garden specializing in arctic and alpine plants.

Heavy destruction in World War II as well as post-war demolition to erect a truly socialist city centre left the city with a vast open space around its town hall where once a vibrant city heart had been. Because of massive investment in out-of-town shopping right after reunification, it was not until 1999 that major building activity was started in the centre. Comparable to Potsdamer Platz in Berlin, a whole new quarter of the city was constructed in recent years. New buildings include the Kaufhof Department store by Helmut Jahn, Galerie Roter Turm with a façade by Hans Kollhoff and Peek & Cloppenburg clothing store by Ingenhofen and Partner. 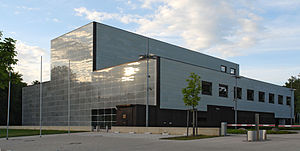 Chemnitz is the largest city of the Chemnitz-Zwickau urban area and is one of the most important economic areas of Germany's new federal states. Chemnitz had a GDP of about €6.3 billion in 2004. Since about 2000, the city's economy has recorded high annual GDP growth rates; Chemnitz is among the top ten German cities in terms of growth rate. The local and regional economic structure is characterized by medium-sized companies, with the heavy industrial sectors of mechanical engineering, metal processing, and vehicle manufacturing as the most significant industries.

About 100,000 people are employed, of whom about 46,000 commute from other municipalities.[8] 16.3% of employees in Chemnitz have a university or college degree, twice the average rate in Germany. 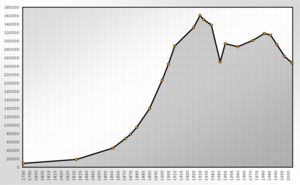 After German reunification Saxony faced a significant population decrease. Since 1990 Chemnitz has lost more than 20 percent of its inhabitants. In 2006 the BBC reported the city of Chemnitz had the lowest birth rate in the world.[9]

Number of minorities in Chemnitz by nationality as of 2012: 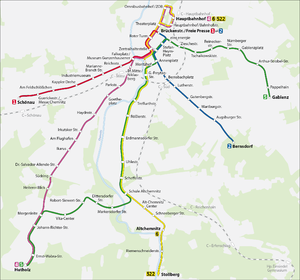 Map of tram and Stadtbahn network 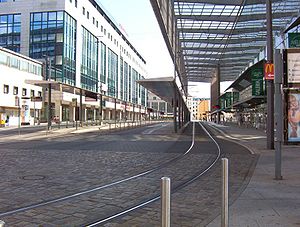 Chemnitz is crossed by the two motorways (Autobahn) A4 Erfurt – Dresden and A72 Hof – Leipzig. The motorway junction Kreuz Chemnitz is situated in the northwestern area of the city. The motorway A72 between Borna and Leipzig is still under construction. Within the administrative area of Chemnitz there are eight motorway exits (Ausfahrt).

Near Chemnitz there are three airports, including the two international airports of Saxony in Dresden and Leipzig. Both Leipzig/Halle Airport and Dresden Airport are situated about 70 km (43 mi) from Chemnitz and offer numerous continental as well as intercontinental flights.

Chemnitz also has a small commercial airport (Verkehrslandeplatz Chemnitz Jahnsdorf) about 13.5 km (8.4 mi) south of the city. When its current upgrade is completed it will have an asphalt runway 1,400 m (4,600 ft) long and 20 m (66 ft) wide. 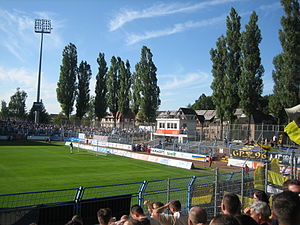 Chemnitz is twinned with: