From Infogalactic: the planetary knowledge core
Jump to: navigation, search
This article is about the Ukrainian city. For the Israeli writer, see Yemima Avidar-Tchernovitz.

Chernivtsi (Ukrainian: Чернівці́ [t͡ʃɛrnʲiβ̞ˈt͡sʲi], Romanian: Cernăuți [tʃerˈnəutsʲ]; Yiddish: טשערנאָוויץ‎ Tschernowitz; see also other names) is a city in western Ukraine, situated on the upper course of the River Prut. Chernivtsi is the administrative center of Chernivtsi Oblast (province) – the northern, Ukrainian part of the historical Moldavian region of Bukovina. At the time of the 2001 Ukrainian Census, the population of the city was 240,600.[4]

Together with the city of Lviv, Chernivtsi is viewed at present to be a cultural center of western Ukraine. The city is also considered one of modern Ukraine's greatest cultural, educational and architectural centers. Historically a cosmopolitan cultural center, Chernivtsi was even dubbed "Little Vienna"[1][2] and "Jerusalem upon the Prut". Chernivtsi is currently twinned with seven other cities around the world. The city is a major regional rail and road transportation hub, also housing an international airport.

Aside from its Ukrainian name of Chernivtsi, the city is also known by many different names in various languages, which still are used by the respective population groups much as they used to be throughout the city's history, either in connection with the rule by one country or another or independently from it: Romanian: Cernăuți; German: Czernowitz; Polish: Czerniowce; Hungarian: Csernovic, Russian: Черновцы́, translit. Chernovtsy (until 1944: Чернови́цы, translit. Chernovitsy). In the times of Halych-Volyn Principality the city's name was Chern.

Archeological evidence discovered in the area surrounding Chernivtsi indicates that a population inhabited it since the Neolithic era. Later settlements included those of the Cucuteni-Trypillian culture,[5] the Corded Ware culture; artifacts from the Bronze and Iron Ages were also found in the city.

A fortified settlement located on the left (north-eastern) shore of the Prut dates back to the time of the Principality of Halych and is thought to have been built by Grand Prince Yaroslav Osmomysl.[6] Legendary accounts refer to this fortress-city as Chern', or Black city; it is said to owe its name to the black color of the city walls, built from dark oak layered with local black-colored soil.[7] This early stronghold was destroyed during the Mongol invasion of Europe by Boroldai in 1259. However, the remaining ramparts of the fortress were still used for defense purposes; in the 17th century they were augmented with several bastions, one of which is still extant. 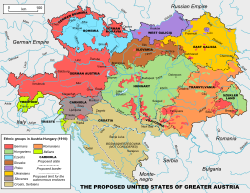 Map of the United States of Greater Austria, proposed in 1906, shows the city at the border of the areas inhabited by Romanians and Ukrainians.

Following the destruction of the fortress, later settlements in the area centered on the right (south-western) shore of the Prut River, at a more strategically advantageous, elevated location. In 1325, when Kingdom of Poland seized control of Galicia, and came into contact with the early Vlach (Romanian) feudal formations, a fort was mentioned under the name Țețina; it was defending the ford and crossing point on the Prut River. It was part of a group of three fortifications, the other two being the fortress of Hotin on the Dniester to the east, and a fort on the Kolachin River, an upriver tributary of Prut.

Between 1359 and 1775, the city and its surroundings were part of the Principality of Moldavia; the city being the administrative center of the homonymous ţinut (county).[8] The name Cernăuţi/Chernivtsi is first attested in a document by Alexander the Good on 8 October 1408.[9] In Ottoman sources, the city was mentioned as "Çernovi", a phonetic transliteration of a Latin cognomen meaning new castle see French Castelnau[10] or Welsh Carno.

In 1775, the northwestern part of the territory of Moldavia was annexed by the Habsburg Empire; this region became known as Bukovina. The city became the region's capital, which in 1849 was raised in status and became known as the Duchy of Bukovina, a crownland of the Austrian Empire. The city received Magdeburg rights.[11] The city began to flourish in 1778 when Knight Karl von Enzenberg was appointed the chief of the Military Administration. He invited many merchants, craftsmen and entrepreneurs to help develop trade and other businesses. Saint Peter's Fairs ( 1–15 July) had given a new vibrant impulse to the market development from 1786. In the late 19th century the German language—due to the Habsburgian and the very important Jewish influence—became the lingua franca and more and more newspapers were edited in German, also a remarkable literary production in German began in this period, featuring most prominently Karl Emil Franzos.[12]

During the 19th and early 20th century, Chernivtsi became a center of both Romanian and Ukrainian national movements. In 1908, it was the site of the first Yiddish language conference, the Czernowitz Conference, coordinated by Nathan Birnbaum. When Austria-Hungary dissolved in 1918, the city and its surrounding area became part of the Kingdom of Romania.[13] In 1930, the city reached a population of 112,400: 26.8% Jews, 23.2% Romanians, 20.8% Germans, 18.6% Ukrainians, the remainder Poles and others. It was one of the five university centers of interwar Romania.

In 1940, the Red Army occupied the area; the area around the city became known as Chernivtsi Oblast, and was allotted to the Ukrainian SSR by the Soviet Union.[13] The city's large Romanian intelligentsia found refuge in Romania; while the Bukovina Germans were "repatriated" according to a Soviet-Nazi agreement. This prompted Romania to switch from an ally of France and Britain to one of Nazi Germany; in July 1941, the Romanian Army retook the city as part of the Axis attack on the Soviet Union during World War II. In August 1941, Romanian military dictator Ion Antonescu ordered the creation of a ghetto in the lowland part of the city, where 50,000 Bukovina Jews were crammed, two-thirds of whom would be deported to Transnistria in October 1941 and partly in early 1942, where the majority perished. Romanian mayor of the city Traian Popovici managed to persuade Antonescu to raise the number of Jews exempted from deportation from 200 to 20,000.

In 1944, when Axis forces were driven out by the Red Army, the city was reincorporated into the Ukrainian SSR. Over the following years, most of the Jews left for Israel; the city was an important node in the Berihah network. Bukovina Poles were also "repatriated" by the Soviets after World War II. The city became a predominantly Ukrainian one.

Since 1991, Chernitvtsi has been a part of independent Ukraine. In May 1999, Romania opened a consulate general in the city. Contemporary Chernivtsi is an important regional center, which is situated on the picturesque banks of the Prut River and occupies an area of about 150 square kilometres (58 sq mi).

In April 2016, amidst the Ukraine crisis, the Chernitvtsi city council banned the use of the word "Russia" on signboards, advertisements, billboards, tables and other public boards.[14]

Chernivtsi is located in the historic region of Bukovina, which is currently shared between Romania (south) and Ukraine (north). The city lies 248 meters above sea level, and is surrounded by forests and fields. The River Prut runs through the city's landscape.

Chernivtsi is the administrative center of the Chernivtsi Oblast (province) and the city itself has own government within the oblast under direct subordination to oblast.

The territory of Chernivtsi is divided into three administrative city raions (districts):

The Romanian population in Chernivtsi started decreasing rapidly after 1950. Many Romanians fled to Romania or were deported to Siberia (where most of them died), and the remaining Romanian population quickly became a minority and assimilated with the majority. Nowadays, the Romanian minority in Chernivtsi is still decreasing as a result of cultural assimilation and emigration to Romania.[citation needed]

Chernivtsi once had a Jewish community of over 50,000, less than a third of whom survived World War II. Romanian lawyer and reserve officer Theodor Criveanu, as well as the then city mayor Traian Popovici, supported by General Vasile Ionescu saved 19,689 Jewish people. Initially, Governor of Bukovina Corneliu Calotescu allowed only 190 Jewish people to stay, but Traian Popovici, after an incredible effort, obtained from the then dictator of Romania Marshal Ion Antonescu an allowance of 20,000.[18] After World War II, the city was a key node in the Berihah network, which helped Jews to emigrate to the then Mandate Palestine from the difficult conditions after the War. Following the collapse of the Soviet Union in 1991, the majority of the remaining Jewish population emigrated to Israel and the United States. A famous member of this latter emigration is the actress Mila Kunis.[19]

Chernivtsi was inhabited by Ukrainians, Romanians, Poles, Ruthenians, Jews, Roma, and Germans. During its affiliation with the Austro-Hungarian monarchy, Chernivtsi enjoyed prosperity and culture as the capital of the Bukovina crown land. After the World War II, the Shoah and Porajmos, and the resettlement and expulsion of the whole ethnic groups, including Germans and Romanians, this status was diminished. Today, the Ukrainians are the dominant population group.

There are many places which attract citizens of Chernivtsi and the visitors: Drama Theatre, Regional Philharmonic Society, Organ and Chamber Music Hall, puppet-theatre, Museum of Local Lore, History and Economy, Museum of Fine Arts, Bukovynian Diaspora Museum, Museum of Folk Architecture and Way of Life, memorial museums of writers, the Central Palace of Culture.

The city of Chernivtsi has a lot of architecturally important buildings. Many historic buildings have been preserved, especially within the city's center. However, after years of disrepair and neglect, the buildings are in need of major restoration.[citation needed]

The main architectural attractions of the city include: the Chernivtsi Drama Theater (1905); the Chernivtsi University—UNESCO World Heritage Site (1882); the Regional Museum of Fine Arts—the former savings bank (1900); the Regional Council—former Palace of Justice (1906); and the Chernivtsi Palace of Culture—former Jewish National House (1908); among many others. The magnificent Moorish Revival Czernowitz Synagogue was heavily damaged by fire in 1941, the walls were used to create the "Chernivtsi" movie theater.[citation needed]

The Czech architect Josef Hlávka designed, in 1864–1882, the buildings that currently house the Chernivtsi State University. They were originally the residence of the Bukovinian and Dalmatian Metropolitans. The Romanesque and Byzantine architecture is embellished with motifs of Ukrainian folk art; for example, the tile roof patterns duplicate the geometric designs of traditional Ukrainian embroidery.

The history of Polish community in Chernivtsi dates back to the late 18th century, when authorities of the Habsburg Empire encouraged Poles to move to Bucovina. By mid-19th century, several Polish organizations existed in the city, including Bratnia Pomoc and Czytelnia Polska. On initiative of publishers of the Gazeta Polska daily newspaper, collection of money for the construction of Polish House was initiated. In early 20th century, two Polish activists, doctor Tadeusz Mischke and judge Jakub Simonowicz purchased a house. In 1904, its expansion was initiated. It was carried out by architect Franciszek Skowron, interior decorator Konrad Górecki and sculptors from Zakopane, Skwarnicki and Gerasimowicz. The expansion was completed in 1905, and Polish House operated until World War Two.

The most popular kinds of sports in Chernivtsi include arching, judo, field hockey, karate, power-lifting and orienteering.[22] Chernivtsi's baseball, hockey, and football clubs (FC Bukovyna Chernivtsi) are participants of the Ukrainian national championships.

Chernivtsi has been host to the Sidecross World Championship a number of times,[23] most recently in June 2010.[24]

Chernivtsi is served by the Chernivtsi International Airport (CWC) located south of the city centre.

Chernivtsi is twinned with:

In February 2016 the Chernivtsi city council terminated its twinned relations with the Russian cities Bryansk and Podolsk due to the Ukrainian crisis.[25][26]