Chernozem (from Russian: чернозём, tr. chernozyom; IPA: [tɕɪrnɐˈzʲɵm] or Ukrainian: чорнозем, translated as "black soil, dirt or earth") is a black-coloured soil containing a high percentage of humus[1] (7% to 15%), and high percentages of phosphoric acids, phosphorus and ammonia.[citation needed] Chernozem is very fertile and produces a high agricultural yield. 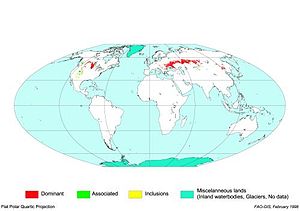 There are two "Chernozem belts" in the world: from eastern Croatia (Slavonia), along the Danube (northern Serbia, northern Bulgaria (Danubian Plain), southern Romania (Wallachian Plain) and Moldova) to northeast Ukraine across the Black Earth Region and southern Russia into Siberia, and the other in the Canadian Prairies in Manitoba. Similar soil types occur in Texas and Hungary. Chernozem layer thickness may vary widely, from several inches up to 60 inches (1.5 metres) in Ukraine.[2]

The terrain can also be found in small quantities elsewhere (for example, on 1% of Polish territory). It also exists in Northeast China, near Harbin. The only true chernozem in Australia is located around Nimmitabel producing some of the richest soils in the nation.[3]

The sale of agricultural land has been illegal in Ukraine since 1992; despite this, there is a black market for chernozem soil, sold in trucks, with approximately $900 million in annual sale.[4]

The dictionary definition of chernozem at Wiktionary