Chicken or the egg 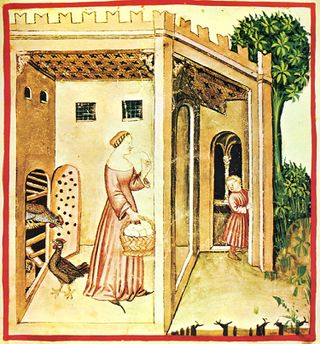 History of the dilemma 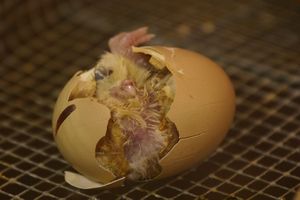 A chick hatching from an egg

Ancient references to the dilemma are found in the writings of classical philosophers. Their writings indicate that the proposed problem was perplexing to them and was commonly discussed by others of their time as well.

Aristotle (384–322 BC) was puzzled by the idea that there could be a first bird or egg and concluded that both the bird and egg must have always existed:

The same he held good for all species, believing, with Plato, "that everything before it appeared on earth had first its being in spirit."[3][needs update]Plutarch (46-126) discussed a series of arguments based on questions posed in a symposium; under the section entitled "Whether the hen or the egg came first":

the problem about the egg and the hen, which of them came first, was dragged into our talk, a difficult problem which gives investigators much trouble. And Sulla my comrade said that with a small problem, as with a tool, we were rocking loose a great and heavy one, that of the creation of the world.[4][5][6][non-primary source needed]

Macrobius (early 5th century), a Roman philosopher, found the problem to be interesting:

You jest about what you suppose to be a triviality, in asking whether the hen came first from an egg or the egg from a hen, but the point should be regarded as one of importance, one worthy of discussion, and careful discussion at that.[7][8][non-primary source needed]

According to evolutionary biologist and popular science writer, Richard Dawkins, the question is moot.[10] In his book The Magic of Reality, Dawkins discusses the origins of humanity, and presumably any other species, in a chapter titled "Who was the First Person". When addressing the question, he writes that "there never was a first person -- because every person had to have parents, and those parents had to be people too!"[11]

In order to explain this, Dawkins employs a thought experiment. In the thought experiment, you start off with a picture of yourself. Then, you stack a photo of your father on top of your photo. Then, he asks the reader to consider continuing this process indefinitely, or until he or she finally encounter the common ancestor of all life on Earth. Now that the reader has this incredible genealogical record of himself or herself, or a chicken, the reader can then begin pulling out pictures from the stack. Dawkins says that, at each generation, the immediately preceding photographs will look only slightly different from the generation before or after, not distinguishable as separate species from their forbears. In other words, no matter where the reader decides to pull a photo from his or her stack of ancestors, he or she will definitely be recognizable as the parents of the generation after himself, and a child of his parents' generation. But take photos from thousands of generations apart, and the ancestor will be nearly unrecognizable from their eventual progeny.[10]