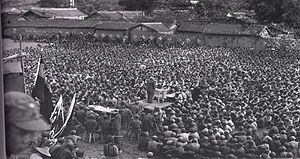 Survivors of the Long March coalesce

On the eve of the Second Sino-Japanese War in 1937, the Kuomintang or Chinese Nationalist Party (KMT), and the Communist Party of China (CPC) joined in a United Front against Japan. After the entrance of the United States into the war after the Japanese attack on Pearl Harbor, the two sides maintained the formal alliance, but fought each other on several occasions. In 1945, Stalin's troops invaded from Soviet Outer Manchuria as part of its declaration of war against Japan. After the Japanese surrender in August, the Americans attempted to broker a coalition government in China, but an all-out war between these two forces soon resumed.

The Nationalists had an advantage in both troops and weapons, controlled a much larger territory and population, and enjoyed world support. The communists were well established in the north and northwest. During the war they had built up networks of local governments and village party leaders who appealed to patriotism rather than class struggle. The best trained Nationalist troops had been lost in early battles against the better equipped Japanese army and in Burma, while the communists had suffered less severe losses. The Soviet Union, though distrustful, provided aid to the communists, and the United States assisted the Nationalists with hundreds of millions of dollars worth of military supplies, as well as airlifting Nationalist troops from central China to Manchuria, an area Chiang Kai-Shek saw as strategically vital to retake. Chiang determined to confront the PLA in Manchuria and committed his troops in one decisive battle in the autumn of 1948. The strength of the communist side was 1.27 million regulars and 2.68 million militias in Sept. 1945.[3] The strength of Nationalist troops in July 1946 was 4.3 million, of which 2.2 million were well-trained and ready for country-wide mobile combat[4][5][6](Some of nationalist troops are poorly trained and equipped).[7][8] The loss of the battle and of important troops was the military turning point. Mao then called for a return to radical land policies which built support among activists. Under generals such as General Lin Biao the PLA had grown beyond the strategy of people's war outlined by Mao and engaged in full-scale conventional war. The Huaihai Campaign of late 1948 and early 1949 in which roughly a million soldiers fought on either side and the decisive battles on the plains gave the PLA complete control over North China.

The Nationalist government also sought to enlist popular support through internal reforms and suppress dissent. The effort failed because of rampant corruption and political and economic chaos. Political repression further alienated liberal and urban elites who had been skeptical of communism. Massive hyperinflation destroyed the middle class which had been the main support of the government. By late 1948 the Nationalist position was extremely bleak. In January 1949, Peking, then known as Beiping, surrendered to the PLA without a fight. Between April and November, major cities passed from Nationalist to Communist control with minimal resistance.

Mainland China for half a century had boasted 8.07 million in combat successes over Nationalist Army. The number includes killing, injuring, taking prisoners and accepting defecting troops. In the 21st century the number had risen to 10.65 million, after the added count of combat merits of conflicts from Sep. 1945 to the outbreak of war and anti-bandit combats which continued to the 1950s.[9]

On October 1, 1949, Mao Zedong proclaimed the establishment of the People's Republic of China. Chiang Kai-shek, 600,000 Nationalist troops, and about two million Nationalist-sympathizer refugees retreated to the island of Taiwan. After that, resistance to the Communists on the mainland was substantial but scattered, such as in the far south. An attempt to take the Nationalist-controlled island of Kinmen was thwarted in the Battle of Kuningtou. In December 1949 Chiang proclaimed Taipei, Taiwan the temporary capital of the Republic, and continued to assert his government as the sole legitimate authority of all China, while the PRC government continued to call for the unification of all China. The last direct fighting between Nationalist and Communist forces ended with the communist capture of Hainan Island in May 1950, though shelling and guerrilla raids continued for a number of years. In June 1950, the outbreak of the Korean War led the American government to place the United States Seventh Fleet in the Taiwan Strait to prevent either side from attacking the other.[10]