Chyngyz Aitmatov (Kyrgyz: Чыңгыз Айтматов [tʃɯŋˈʁɯs ɑjtˈmɑtəf]; Russian: Чинги́з Тореку́лович Айтма́тов) (12 December 1928 – 10 June 2008) was a Soviet and Kyrgyz author who wrote in both Russian and Kyrgyz. He is the best known figure in Kyrgyzstan's literature.

He was born to a Kyrgyz father and Tatar mother. Aitmatov's parents were civil servants in Sheker. In 1937 his father was charged with "bourgeois nationalism" in Moscow, arrested and executed in 1938.[1]

Aitmatov lived at a time when Kyrgyzstan was being transformed from one of the most remote lands of the Russian Empire to a republic of the USSR. The future author studied at a Soviet school in Sheker. He also worked from an early age. At fourteen he was an assistant to the Secretary at the Village Soviet. He later held jobs as a tax collector, a loader, an engineer's assistant and continued with many other types of work.

Aitmatov suffered kidney failure, and on 16 May 2008 was admitted to a hospital in Nuremberg, Germany, where he died of pneumonia on 10 June 2008 at the age of 79.[1] After his death, Aitmatov was flown to Kyrgyzstan, where there were numerous ceremonies before he was buried in Ata Beyit cemetery, which he helped found[6] and where his father most likely is buried,[7] in Chong-Tash village, Alamüdün district, Chüy oblast, Kyrgyzstan.

His obituary in The New York Times characterized him as "a Communist writer whose novels and plays before the collapse of the Soviet Union gave a voice to the people of the remote Soviet republic of Kyrgyz" and adds that he "later became a diplomat and a friend and adviser to the Soviet leader Mikhail Gorbachev."[8] 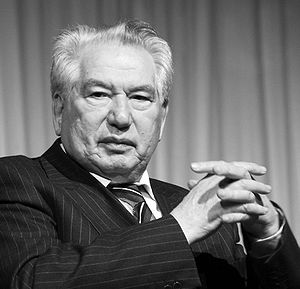 Chinghiz Aitmatov belonged to the post-war generation of writers. His output before Jamila [9] was not significant, a few short stories and a short novel called Face to Face. But it was Jamila that came to prove the author's work.[9] Seen through he eyes of an adolescent boy, it tells of how Jamila, a village girl, separated from her soldier husband by the war, falls in love with a disabled soldier staying in their village as they all work to bring in and transport the grain crop. Aitmatov's representative works also include the short novels Farewell, Gulsary!,[10] The White Ship, The Day Lasts More Than a Hundred Years,[11] and The Scaffold.

Aitmatov was honoured in 1963 with the Lenin Prize for Tales of the Mountains and Steppes (a compilation including "Jamila", "First Teacher" and "Farewell Gulsary") and was later awarded a State prize for Farewell, Gulsary!.[10] Aitmatov's art was glorified by admirers.[12] Even critics of Aitmatov mentioned the high quality of his novels.[13]

Aitmatov's work has some elements that are unique specifically to his creative process. His work drew on folklore, not in the ancient sense of it; rather, he tried to recreate and synthesize oral tales in the context of contemporary life. This is prevalent in his work; in nearly every story he refers to a myth, a legend, or a folktale.[1] In The Day Lasts More Than a Hundred Years, a poetic legend about a young captive turned into a mankurt serves as a tragic allegory and becomes a significant symbolic expression of the philosophy of the novel.

A second aspect of Aitmatov's writing is his ultimate closeness to our "little brothers" the animals, for their and our lives are intimately and inseparably connected. The two center characters of Farewell, Gulsary! are a man and his stallion. A camel plays a prominent role in The Day Lasts More Than a Hundred Years; one of the key turns of the novel which decides the fate of the main character is narrated through the story of the camel's rut and riot. The Scaffold starts off and finishes with the story of a wolf pack and the great wolf-mother Akbara and her cub; human lives enter the narrative but interweave with the lives of the wolves. Some of his stories were filmed, like The First Teacher in 1965 and "Red Scarf" (1970) as The Girl with the Red Scarf (1978).

As many educated Kyrgyzs, Aitmatov was fluent in both Kyrgyz and Russian. As he explained in one of his interviews, Russian was as much of a native language for him as Kyrgyz. Most of his early works he wrote in Kyrgyz; some of these he later translated into Russian himself, while others were translated into Russian by other translators. Since 1966, he was writing in Russian.[14]

In addition to his literary work, Chinghiz Aitmatov was first the ambassador for the Soviet Union and later for Kyrgyzstan, to the European Union, NATO, UNESCO and the Benelux countries.[1]