The chital or cheetal (Axis axis),[2] also known as chital deer, spotted deer or axis deer, is a deer which commonly inhabits wooded regions of India, Sri Lanka, Nepal, Bangladesh, Bhutan, and in small numbers in Pakistan. The chital goes by various names in India, among which include: chital horin in Bengali, thith muwa in Sinhalese, jinke in Kannada, pulli maan in Tamil and Malayalam, jinka in Telugu, phutuki horin in Assamese, haran/harin in Marathi, and hiran in Hindi/Urdu (the latter two derived from harina, the Sanskrit cognate for 'deer'). It is the most common deer species in Indian forests. The name chital comes from the Bengali word chitral (চিত্রল)/chitra (চিত্রা), which means "spotted" in Bengali (from the Sanskrit "chitra", "variegated" or "spotted"). The chital is monotypic within the genus Axis, but this genus has also included three species that now are placed in Hyelaphus based on genetic evidence.[3][4]

(video) A chital eats at a zoo in Japan. 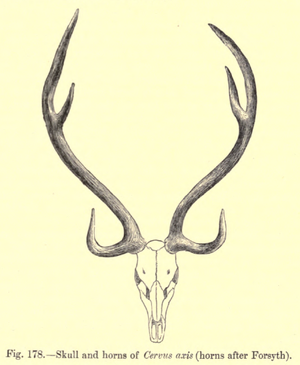 The chital's coat is pinkish fawn, marked with white spots, and its underparts are also white. Its antlers, which it sheds annually, are usually three-pronged and curve in a lyre shape and may extend to 75 cm (2.5 ft). Compared to the hog deer, its close relative, the chital has a more cursorial build. It also has a more advanced morphology with antler pedicles being proportionally short and its auditory bullae being smaller. It also has large nares. The male chital averages about 90 cm (35 in) tall at the shoulder, with a total length of 170 cm (67 in), including a 20 cm (7.9 in). Males, at a typical weight of 30 to 75 kg (66 to 165 lb), are somewhat larger than females, at 25 to 45 kg (55 to 99 lb).[5] Exceptionally large males can weigh up to 98 to 110 kg (216 to 243 lb).[6] Their lifespans are around 8–14 years.[citation needed] 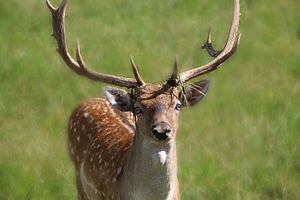 The spotted deer is found in large numbers in dense deciduous or semievergreen forests and open grasslands.[10] The highest numbers of chital are found in the forests of India, where they feed upon tall grass and shrubs.[7] Chital have been also spotted in Phibsoo Wildlife Sanctuary in Bhutan, which is the only remaining natural sal (Shorea robusta) forests in the country. They do not occur at higher-elevation forests, where they are usually replaced by other species such as the sambar deer. They also prefer heavy forest cover for shade and are intolerant of direct sunlight.[7][10] 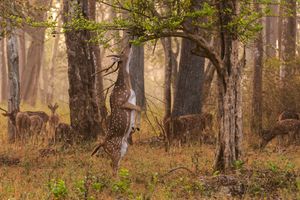 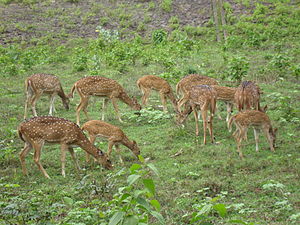 Chital at an evergreen area 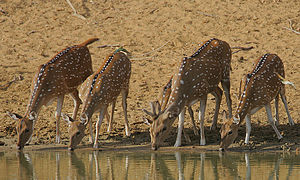 Chitals drinking at a waterhole

Chital are primarily grazers and feed on short, sprouting grasses.[7][10] However, they will also browse, as well as eat forbs, fruit, and branches of trees, especially when they are thrown down by monkeys.[7][10] Stags, more than hinds, will stand on their hind legs on feed on tree foliage.[7][10] Chital also eat their shed antlers as a source of nutrients, and will use mineral licks.[7][10] Chital prefer to be near water and will drink in mornings and evenings in hot weather. Predators of the chital include wolves, tigers, Asiatic lions (in Gir Forest only), leopards, Indian rock pythons, dholes, Indian pariah dogs, and mugger crocodiles. Red foxes and golden jackals also sometimes prey on chital fawns. Hinds and fawns are more likely to be victims of predation than adult stags,[7] and dholes are more successful in catching stags than tigers and leopards.[7] The chital can run up to 64 km/h (40 mph) to escape its predators.[11][12]

An interesting relationship has been observed between herds of axis deer and troops of the northern plains gray langurs (Presbytis entellus), a widespread leaf-eating monkey taxon of South Asia. Axis deer apparently benefit from the langurs' good eyesight and ability to post a lookout in a treetop, helping to raise the alarm when a predator approaches.[10] For the langurs' part, the axis deer's superior sense of smell would seem to assist in early predator warning, and it is common to see langurs foraging on the ground in the presence of axis deer.[10] The axis deer also benefit from fruits dropped by the langurs from trees such as Terminalia bellerica and Phyllanthus emblica.[13] Alarm calls of either species can be indicative of the presence of a predator such as a tiger.[citation needed] 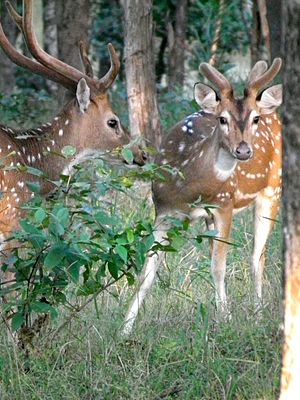 Axis deer most commonly occur in herds of 10 to 50 individuals of both sexes. Large dominant stags without velvet stay in the center of the herd and are surrounded by the females and their young.[7] Smaller stags with velvet occupy the boundaries of the herd. Chital stags pay close attention when a stag of equal size to them enters their group.[7] They will follow, graze with, and display to the newcomer. Sparring is more common between young stags, while older, larger stags prefer horning, pawing, and marking.[7] Large stags with hard antlers are more likely to be well spaced out. Stags are known to stand on their hind legs and mark tree branches above.[7][10]

The chital has a protracted breeding season due in part to the tropical climate, and births can occur throughout the year. For this reason, males do not have their antler cycles in synchrony and some females are fertile at all times of the year. Males sporting hard antlers are dominant over those in velvet or those without antlers, irrespective of their size and other factors. Stags commonly bellow during the rut.[10] Chital hinds have three-week-long estrous cycles. Chital courtship is based on tending bonds.[7][10] A stag will follow and guard a hind in estrus.[7] During this time, the stag will not eat. The pair will do several bouts of chasing and mutual licking before copulation.[7][10] Hinds birth one fawn, rarely two, at a time.[7] Young fawns suckle longer than older fawns which suckle for 55 seconds. Hinds and fawns have loose bonds and it is common for them to get separated.[7] However, because chital tend to stay close to each other, it is not difficult for a hind to find a fawn.[7] Fawns gather in nurseries, occasionally.[citation needed] 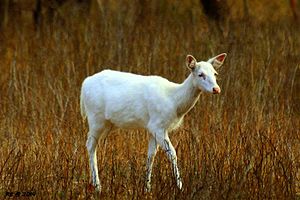 Chital are generally silent when grazing together.[7] They do, though, make high-pitched chuckles when walking. When grazing, chital do a "courtesy posture" when they pass each other.[7] The bellow of a chital stag exists in a primitive state of development compared to other deer like the red deer or elk. Its calls are one or several coarse bellows and loud growls, which may be weaker versions of the bellow.[7] Bellowing coincides with rutting.[10][14] Stags guarding estrous females will make high-pitched growls at lesser stags that hang about.[7] Stags will also moan during aggressive displays or when resting.[15] When alarmed, chital will bark. These barks usually occur among females and juveniles, and is repeated back and forth. Fawns separated from their mothers will squeal. When in danger, they run in groups. They will make bursts of high-speed running and then soon tire and dive into heavy cover to hide.[7]

The chital ranges over 8–30ºN in India and through Nepal, Bhutan, Bangladesh, and Sri Lanka.[16] The western limit of its range is eastern Rajasthan and Gujarat. The northern limit is along the Bhabar-terai belt of the foothills of the Himalaya and from Uttar Pradesh and Uttaranchal through to Nepal, northern West Bengal and Sikkim and then to western Assam and the forested valleys of Bhutan which are below 1,100 m asl.[1] The eastern limit of its range is through western Assam[17][18] to the Sunderbans of West Bengal (India) and Bangladesh.[1] Sri Lanka is the southern limit.[10] Chital occur sporadically in the forested areas throughout the rest of the Indian peninsula.[19] Within Bangladesh, it currently only exists in the Sundarbans, as it became extinct in the central, north-east and south-east regions of the country.[1]

The chital was the first species of deer introduced into Australia in the early 1800s by Dr. John Harris, surgeon to the New South Wales Corps, and he had about 400 of these animals on his property by 1813. These did not survive and the primary range of the chital is now confined to a few cattle stations in North Queensland near Charters Towers and several feral herds on the NSW north coast. While some of the stock originated from Sri Lanka (Ceylon), the Indian race likely is also represented.[citation needed]

In the 1860s, axis deer were introduced to the island of Molokai, Hawaii, as a gift from Hong Kong to King Kamehameha V. Today, the deer are plentiful on Lanai, another of the Hawaiian Islands. The paniolos (cowboys) were instructed to lasso the deer from Molokai and to bring them for shipping to Lanai. Hawaii wildlife officials believe people have flown the deer by helicopter and transported them by boat onto the island. In August 2012, a helicopter pilot pleaded guilty to transporting four axis deer from Maui to the Big Island.[20]

The deer were introduced to Maui island in the 1950s as part of a post-World War II veteran hunting opportunity. Because the deer have no natural predators on the Hawaiian islands, their population is growing 20 to 30% each year.[21] Hawaii law now prohibits "the intentional possession or interisland transportation or release of wild or feral deer."[22]

In 1932, axis deer were introduced to Texas. In 1988, self-sustaining herds were found in 27 counties, located in central and southern Texas.[23] The deer are most populated on the Edwards Plateau, where the land is similar to that of India.[24]

The chital is listed by the IUCN as being of least concern "because it occurs over a very wide range within which there are many large populations".[1] Currently, no range-wide threats to chitals are present, and they live in many protected areas. However, population densities are below ecological carrying capacity in many places due to hunting and competition with domestic livestock. Hunting for the deer's meat has caused substantial declines and local extinctions.[1] The axis deer is protected under Schedule III of the Indian Wildlife Protection Act (1972)[19] and under the Wildlife (Preservation) (Amendment) Act, 1974 of Bangladesh.[1] Two primary reasons for its good conservation status are its legal protection as a species and a network of functioning protected areas.[1]

The chital has been introduced to Andaman Islands, Australia, Mexico, Chile, Argentina, Uruguay, Brazil, Paraguay, Point Reyes National Seashore near San Francisco, California, Texas, Florida, Mississippi, Alabama, and Hawaii in the United States, and to the Veliki Brijun Island in the Brijuni Archipelago of the Istrian Peninsula in Croatia.[25][26][27]