From Infogalactic: the planetary knowledge core
Jump to: navigation, search
For other uses, see Choice (disambiguation). 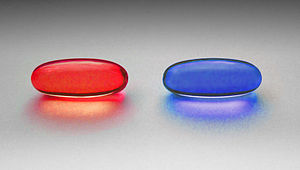 In the film The Matrix, Neo is offered the option of consuming either the red pill or the blue pill. Picking the red pill would result in the truth of Neo's world being revealed to him, while picking the blue pill would allow him to continue in ignorance. Thus, Neo must judge the merits of the possible outcomes of his choice.

Choice involves mentally making a decision: judging the merits of multiple options and selecting one or more of them. One can make a choice between imagined options ("what would I do if ...?") or between real options followed by the corresponding action. For example, a traveller might choose a route for a journey based on the preference of arriving at a given destination as soon as possible. The preferred (and therefore chosen) route can then follow from information such as the length of each of the possible routes, traffic conditions, etc. If the arrival at a choice includes more complex motivators, cognition, instinct and feeling can become more intertwined.

Simple choices might include what to eat for dinner or what to wear on a Saturday morning - choices that have relatively low-impact on the chooser's life overall. More complex choices might involve (for example) what candidate to vote for in an election, what profession to pursue, a life partner, etc. - choices based on multiple influences and having larger ramifications.

Most people[quantify] regard having choices as a good thing, though a severely limited or artificially restricted choice can lead to discomfort with choosing, and possibly an unsatisfactory outcome. In contrast, a choice with excessively numerous options may lead to confusion, regret of the alternatives not taken, and indifference in an unstructured existence;[1] and the illusion that choosing an object or a course leads necessarily to control of that object or course can cause psychological problems.[citation needed]

There are four main types of decisions, although they can be expressed in different ways. Brian Tracy breaks them down into:[2]

Another way of looking at decisions focuses on the thought mechanism used, is the decision:[4]

Recognizing that "type" is an imprecise term, an alternate way to classify types of choices is to look at outcomes and the impacted entity. For example, using this approach three types of choices would be:[5]

In this approach, establishing the types of choices makes it possible to identify the related decisions that will influence and constrain a specific choice as well as be influenced and constrained by another choice.

There are many "executive decision maker" products available, such as the decision wheels[6] and the Magic 8-Ball, which randomly produce yes/no or other "decisions" for someone who can not make up their mind or just wants to delegate.

A Ouija board is also a delegated decision.

As a moral principle, decisions should be made by those most affected by the decision, but this is not normally applied to persons in jail, who might likely make a decision other than to remain in jail.[7] Robert Gates cited this principle in allowing photographs of returning war dead.[8]

When choosing between options one must make judgments about the quality of each option's attributes. For example, if one is choosing between candidates for a job, the quality of relevant attributes such as previous work experience, college or high school GPA, and letters of recommendation will be judged for each option and the decision will likely be based on these attribute judgments. However, each attribute has a different level of evaluability, that is, the extent to which one can use information from that attribute to make a judgment.

As a result, evaluability can cause preference reversals between joint and separate evaluations. For example, Hsee, George Loewenstein, Blount & Bazerman (1999)[9] looked at how people choose between options when they are directly compared because they are presented at the same time or when they cannot be compared because one is only given a single option. The canonical example is a hiring decision made about two candidates being hired for a programming job. Subjects in an experiment were asked to give a starting salary to two candidates, Candidate J and Candidate S. However, some viewed both candidates at the same time (joint evaluation), whereas others only viewed one candidate (separate evaluation). Candidate J had experience of 70 KY programs, and a GPA of 2.5, whereas Candidate S had experience of 10 KY programs and a GPA of 3.9. The results showed that in joint evaluation both candidates received roughly the same starting salary from subjects, who apparently thought a low GPA but high experience was approximately equal to a high GPA but low experience. However, in the separate evaluation, subjects paid Candidate S, the one with the high GPA, substantially more money. The explanation for this is that KY programs is an attribute that is difficult to evaluate and thus people cannot base their judgment on this attribute in separate evaluation.

Number of options and the paradox of choice

A number of research studies in economic psychology have focused on how individual behavior differs when the choice set size (the number of choices to choose from) is low versus when it is high. Of particular interest is whether individuals are more likely to purchase a product from a large versus a small choice set. Currently, the effect of choice set size on the probability of a purchase is unclear. In some cases, large choice set sizes discourage individuals from making a choice[10] and in other cases it either encourages them or has no effect.[11] One study compared the allure of more choice to the tyranny of too much choice. Individuals went virtual shopping in different stores that had a randomly determined set of choices ranging from 4 to 16, with some being good choices and some being bad. Researchers found a stronger effect for the allure of more choice. However, they speculate that due to random assignment of number of choices and goodness of those choices, many of the shops with fewer choices included zero or only one option that was reasonably good, which may have made it easier to make an acceptable choice when more options were available.[12]

There is some evidence that while greater choice has the potential to improve a person's welfare, sometimes there is such a thing as too much choice. For example, in one experiment involving a choice of free soda, individuals explicitly requested to choose from six as opposed to 24 sodas, where the only benefit from the smaller choice set would be to reduce the cognitive burden of the choice.[13] A recent study supports this research, finding that human services workers indicated preferences for scenarios with limited options over extensive-options scenarios. As the number of choices within the extensive-options scenarios increased, the preference for limited options increased as well.[14] Attempts to explain why choice can demotivate someone from a purchase have focuses on two factors. One assumes that perusing a larger number of choices imposes a cognitive burden on the individual.[15] The other assumes that individuals can experience regret if they make a suboptimal choice, and sometimes avoid making a choice to avoid experiencing regret.[16]

Further research has expanded on choice overload, suggesting that there is a paradox of choice. As increasing options are available, three problems emerge. First, there is the issue of gaining adequate information about the choices in order to make a decision. Second, having more choices leads to an escalation of expectation. When there are increased options, people’s standards for what is an acceptable outcome rise; in other words, choice “spoils you.” Third, with many options available, people may come to believe they are to blame for an unacceptable result because with so many choices, they should have been able to pick the best one. If there is one choice available, and it ends up being disappointing, the world can be held accountable. When there are many options and the choice that one makes is disappointing, the individual is responsible.[17]

However, a recent meta-analysis of the literature on choice overload calls such studies into question (Scheibehenne, Greigeneder, and Todd, 2010). In many cases, researchers have found no effect of choice set size on people's beliefs, feelings, and behavior. Indeed, overall, the effect of "too many options" is minimal at best.

While it might be expected that it is preferable to keep one’s options open, research has shown that having the opportunity to revise one’s decisions leaves people less satisfied with the decision outcome.[18] A recent study found that participants experienced higher regret after having made a reversible decision. The results suggest that reversible decisions cause people to continue to think about the still relevant choice options, which might increase dissatisfaction with the decision and regret.[19]

Individual personality plays a significant role in how individuals deal with large choice set sizes. Psychologists have developed a personality test that determines where an individual lies on the satisficer-maximizer spectrum. A maximizer is one who always seeks the very best option from a choice set, and may anguish after the choice is made as to whether it was indeed the best. Satisficers may set high standards but are content with a good choice, and place less priority on making the best choice. Due to this different approach to decision-making, maximizers are more likely to avoid making a choice when the choice set size is large, probably to avoid the anguish associated with not knowing whether their choice was optimal.[20] One study looked at whether the differences in choice satisfaction between the two are partially due to a difference in willingness to commit to one’s choices. It found that maximizers reported a stronger preference for retaining the ability to revise choices. Additionally, after making a choice to buy a poster, satisficers offered higher ratings of their chosen poster and lower ratings of the rejected alternatives. Maximizers, however, were less likely to change their impressions of the posters after making their choice which left them less satisfied with their decision.[21]

Maximizers are less happy in life, perhaps due to their obsession with making optimal choices in a society where people are frequently confronted with choice.[22] One study found that maximizers reported significantly less life satisfaction, happiness, optimism, and self-esteem, and significantly more regret and depression, than did satisficers. In regards to buying products, maximizers were less satisfied with consumer decisions and were more regretful. They were also more likely to engage in social comparison, where they analyze their relative social standing among their peers, and to be more affected by social comparisons in which others appeared to be in higher standing than them. For example, maximizers who saw their peer solve puzzles faster than themselves expressed greater doubt about their own abilities and showed a larger increase in negative mood.[23] On the other hand, people who refrain from taking better choices through drugs or other forms of escapism tend to be much happier in life.

Others[who?] say that there is never too much choice and that there is a difference between happiness and satisfaction: a person who tries to find better decisions will often be dissatisfied, but not necessarily unhappy since his attempts at finding better choices did improve his lifestyle (even if it wasn't the best decision he will continually try to incrementally improve the decisions he takes).

Choice architecture is the process of encouraging people to make good choices through grouping and ordering the decisions in a way that maximizes successful choices and minimizes the number of people who become so overwhelmed by complexity that they abandon the attempt to choose. Generally, success is improved by presenting the smaller or simpler choices first, and by choosing and promoting sensible default options.[24]

Sophia Rosenfeld analyses critical reactions to choice in her review[26] of some of the work of Iyengar,[27] Ben-Porath,[28] Greenfield[29] and Salecl.[30]