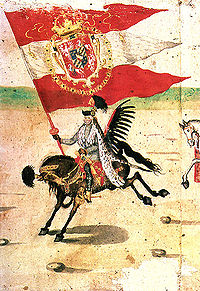 Great Chorąży of the Polish Crown, 1605

Chorąży or Khorunzhyi (Polish pronunciation: [xɔˈrɔ̃ʐɨ]; means "Standard-bearer"; Ukrainian: Хорунжий, transliterated: Khorunzhiy) is a military rank in Poland, Ukraine and some neighboring countries. A chorąży was once a knight who bore a standard — the emblem of an armed troop, a province (województwo), a land (ziemia), a duchy, or the kingdom. This function later evolved into a non-hereditary noble title.

From the end of the 14th century in the Kingdom of Poland and the Grand Duchy of Lithuania, and later in the Polish-Lithuanian Commonwealth, there were four "central" Chorąży positions:

At the same time, Chorąży was also an honorary office in a land.

From the 16th century, Chorąży was the title of the military leader of a Cossack community, and later a rank in the Cossack Hosts. The rank, written "хорунжий" (Khorunzhiy) in Russian, was officially recognized in the 1792 Table of Ranks. This Cossack junior officer rank corresponded to the rank of second lieutenant (подпоручик, or podporuchik) of infantry or cornet of cavalry.

History of the ``Warrant Officers`` Corps

Corps warrant officers is the name of the personal body of soldiers in the Polish Army, which existed between 1963–2004, higher than the NCO corps, and lower than the officer. The body was introduced in 1963, expanded in terms of the hierarchy in 1967 and 1996 and again in July 2004 it was abolished as a separate rank, while the ranks of soldiers wearing standard-bearers included senior NCOs. At the time of the introduction of this corps, professional soldiers who are its members should hold a secondary education matriculation. Virtually warrant were highly skilled technicians.

The decision of the politicians who are motivated in their conduct by a lack of warrant officers in the armies of both NATO and others, the warrant officers corps was liquidated, dropping them to the NCO corps. Result was a marked change in the ratio between officers and NCOs standard-bearers. This decision is criticized, among others for the fact that according to some stakeholders the possibility of multiple standard-bearer was closed and education skills, because that decision is thought to be the officers responsible for planning and decision-making process, and non-commissioned officers for carrying out orders.