Chris Koster (born August 31, 1964) is an American politician who served as the 41st Attorney General of Missouri from 2009 to 2017. Before he was elected Attorney General, he had served in the Missouri Senate since 2005 representing the 31st Senatorial District as a Republican until August 1, 2007, when he switched to the Democratic Party.[3]

He was the Democratic nominee for Governor of Missouri in the 2016 election[4] and was defeated by Republican nominee Eric Greitens in the general election.

Koster was born and raised in St. Louis, where he attended Saint Louis University High School. He went on to study at the University of Missouri in Columbia where he received his Bachelor of Arts degree in 1987. Four years later, he received his juris doctor degree from the University of Missouri School of Law in 1991. Additionally, he earned his master of business administration from Washington University in St. Louis in 2002. Before becoming a county prosecuting attorney, Koster practiced law with the Kansas City law firm of Blackwell Sanders from 1993 to 1994. He also served as an Assistant Attorney General for the Office of the Missouri Attorney General from 1991-93.[citation needed]

Before his election to the Missouri Senate in 2004, Koster served as Prosecuting Attorney of Cass County for 10 years. He was first elected prosecutor in 1994 and was reelected in 1998 and 2002 by wide margins. As prosecutor, he supervised a staff of 20 who enforced Missouri’s criminal laws in Cass County. Additionally, his office served as the civil counsel for all non-criminal matters before the county government. During his tenure, Koster supervised litigation in about 20,000 cases. He led investigations into many of Missouri’s most notorious criminal cases, including the investigation against serial killer John E. Robinson. He has developed extensive trial experience and has argued and won cases before the Missouri Supreme Court.

Koster was first elected to the Missouri Senate in 2004 as a Republican. He represented Missouri's 31st Senatorial District, which consists of Cass, Johnson, Bates and Vernon counties. During his time in the Missouri General Assembly, Koster played key roles in the debates over stem cell research, tort reform, and the elimination of Medicaid fraud. In 2006, he carried legislation in the Senate that overhauled Missouri’s eminent domain laws. He served on these Senate committees:

Before his change of parties, Koster was chairman of the Republican Caucus, the majority party's fourth-ranking position in the Missouri State Senate.[7]

On August 5, 2008, Koster narrowly defeated State Representative Margaret Donnelly in the Democratic primary for the nomination for Missouri Attorney General. Koster won despite accusations that his campaign violated state law in raising money from multiple committees. He also survived the disclosure that he played a supporting role in a plagiarism episode that damaged Attorney General William L. Webster’s campaign for governor in 1992. Fresh out of law school, Koster worked for Webster, a Republican, as an assistant state attorney general.[8] His campaign was not easily won because he had to overcome the label of "opportunist" as a result of switching parties during the '08 election. He then went on to defeat Republican State Senator Mike Gibbons in the general election, 52.83% to 47.17%.[9] He was sworn in as Attorney General on January 12, 2009, succeeding Governor Jay Nixon. 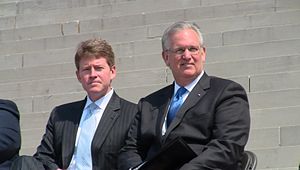 In 2012, after Koster's staff of 56 moved to a portion of the Broadway Building in Jefferson City, a $3.2 million request was made for "repairs, replacements and improvements" on two floors, "to include interior demolition, construction of new interior finishes, upgrades to the HVAC and electrical systems, new furniture, fixtures and equipment." Koster's own office is in the Supreme Court Building. "Funding the proposed renovation would not come from general revenue, but rather about $400,000 in administrative allowances that accompany federal grants, and about $2.8 million from the Merchandising Practices Revolving Fund. Money recovered by the state in consumer fraud cases goes into the fund, which is available to pay expenses of the attorney general's office."[15]

Koster supports same-sex marriage, but defended his state's former constitutional ban on it because voters approved it.[16]

Koster's office defended U.S. District Judge Catherine D. Perry after she denied a motion for temporary restraining orders on six police officers enforcing a "5-second rule" that required demonstrators to move every five seconds or face arrest in Ferguson, Missouri, citing the need for law enforcement's protection of property and the availability of a "free-speech zone".[17] However, at the time of this ruling, the free speech zone was off-limits to the public.[18] This "5-second rule" was later determined to be unconstitutional by a different federal judge.[19]

In October 2014, a California judge dismissed a lawsuit Koster filed, rejecting the arguments of six states that challenged California's prohibition on the sale of eggs laid by caged hens kept in conditions more restrictive than those approved by California voters in a 2008 ballot initiative, Proposition 2. Judge Kimberly Mueller ruled that the states lacked legal standing to sue on behalf of their residents and that Koster and other plaintiffs were representing only the interests of egg farmers, rather than "a substantial statement of their populations".[20][21][22] According to the Kansas City Star. Koster's office spent more than $83,000 on the failed lawsuit.[23][24]

As his second term as Attorney General was coming to an end, Koster was running for governor.[25][26] He easily won the August 2 Democratic primary and faced Republican Eric Greitens in the November 8 general election. He lost the general election with 45.4% of the vote to Greitens' 51.3%.

Koster ultimately said that he would no longer accept gifts from lobbyists. In Missouri, it is legal for elected officials to accept unlimited campaign contributions and gifts from lobbyists, and despite his position on lobbying reform, Koster rejects the idea of placing limits on the amount of money a corporation or a wealthy individual could contribute to a campaign. He instead suggests adding more transparency to the existing system.[32]