Christian Boehmer Anfinsen, Jr. (March 26, 1916 – May 14, 1995)[1] was an American biochemist. He shared the 1972 Nobel Prize in Chemistry with Stanford Moore and William Howard Stein for work on ribonuclease, especially concerning the connection between the amino acid sequence and the biologically active conformation (see Anfinsen's dogma).[2]

Anfinsen was born in Monessen, Pennsylvania, into a family of Norwegian American immigrants. His parents were Sophie (Rasmussen) and Christian Boehmer Anfinsen, Sr., a mechanical engineer.[3] The family moved to Philadelphia in the 1920s. He earned a bachelor's degree from Swarthmore College in 1937. While attending Swarthmore College he played varsity football and joined the Delta Upsilon Fraternity.

In 1939, he earned a master's degree in organic chemistry from the University of Pennsylvania. In 1939, The American-Scandinavian Foundation awarded Anfinsen a fellowship to develop new methods for analyzing the chemical structure of complex proteins, namely enzymes, at the Carlsberg Laboratory in Copenhagen, Denmark. In 1941, Anfinsen was offered a university fellowship for doctoral study in the Department of Biological Chemistry at Harvard Medical School. There, Anfinsen received his Ph.D. in biochemistry in 1943.[4] In 1979, he converted to Judaism, by undergoing an Orthodox conversion and that same year he quit smoking. Although Anfinsen wrote in 1985 that his feelings on religion still reflect a fifty-year period of orthodox agnosticism.[5]

Anfinsen had three children with his first wife, Florence Kenenger, to whom he was married from 1941 to 1978. He married Libby Shulman Ely, with whom he had 4 stepchildren, in 1979.[6]

His papers were donated to the National Library of Medicine by Libby Anfinsen between 1998 and 1999.[7] 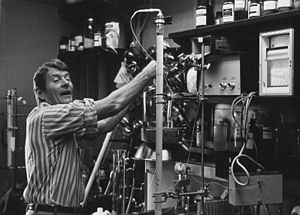 Anfinsen in the lab

In 1950, the National Heart Institute, part of the National Institutes of Health in Bethesda, Maryland, recruited Anfinsen as chief of its Laboratory of Cell physiology. In 1954, a Rockefeller Foundation fellowship enabled Anfinsen to return to the Carlsberg Laboratory for a year and a Guggenheim Foundation fellowship allowed him to study at the Weizmann Institute of Science in Rehovot, Israel from 1958–59.[8] He was elected a Fellow of the American Academy of Arts and Sciences in 1958.[9]

In 1962, Anfinsen returned to Harvard Medical School as a visiting professor and was invited to become chair of the Department of Chemistry. He was subsequently appointed Chief of the Laboratory of Chemical Biology at the National Institute of Arthritis and Metabolic Diseases (now the National Institute of Arthritis, Diabetes, and Digestive and Kidney Diseases), where he remained until 1981. From 1982 until his death in 1995, Anfinsen was Professor of Biophysical Chemistry at Johns Hopkins.[10] 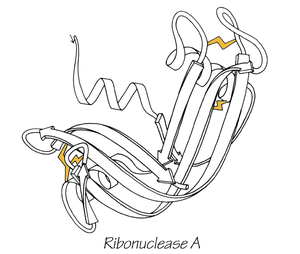 Ribonuclease A 3D structure, with SS bonds in gold

Anfinsen published more than 200 original articles, mostly in the area of the relationships between structure and function in proteins. He was also a pioneer of ideas in the area of nucleic acid compaction. In 1961 he showed that ribonuclease could be refolded after denaturation while preserving enzyme activity, thereby suggesting that all the information required by protein to adopt its final conformation is encoded in its amino-acid sequence. He belonged to the National Academy of Sciences (USA), the Royal Danish Academy of Sciences and Letters and the American Philosophical Society.[5][11]

Established in 1996, The Christian B. Anfinsen Award is presented annually to distinguished scientists, the Awards recognize excellence and outstanding achievements in the multidisciplinary fields of protein science, and honor distinguished contributions in the areas of leadership, education, or service. It is sponsored by The Protein Society, and recognizes significant technical achievements in the field of protein science.[12]