Christian existentialism is a theo-philosophical movement which takes an existentialist approach to Christian theology. The school of thought is often traced back to the work of the Danish philosopher and theologian Søren Kierkegaard (1813–1855), who is considered the father of existentialism.[1] 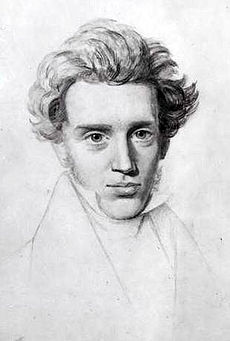 Christian existentialism relies on Kierkegaard's understanding of Christianity. Kierkegaard argued that the universe is fundamentally paradoxical, and that its greatest paradox is the transcendent union of God and humans in the person of Jesus Christ. He also posited having a personal relationship with God that supersedes all prescribed moralities, social structures and communal norms,[2] since he asserted that following social conventions is essentially a personal aesthetic choice made by individuals.[citation needed]

Kierkegaard proposed that each person must make independent choices, which then constitute his existence. Each person suffers from the anguish of indecision (whether knowingly or unknowingly) until he commits to a particular choice about the way to live. Kierkegaard also proposed three rubrics with which to understand the conditions that issue from distinct life choices: the aesthetic, the ethical, and the religious.

One of the major premises of Christian existentialism entails calling the masses back to a more genuine form of Christianity. This form is often identified with some notion of Early Christianity, which mostly existed during the first three centuries after Christ's crucifixion. Beginning with the Edict of Milan, which was issued by Roman Emperor Constantine I in AD 313, Christianity enjoyed a level of popularity among Romans and later among other Europeans. And yet Kierkegaard asserted that by the 19th century, the ultimate meaning of New Testament Christianity (love, cf. agape, mercy and loving-kindness) had become perverted, and Christianity had deviated considerably from its original threefold message of grace, humility, and love.

Another major premise of Christian existentialism involves Kierkegaard's conception of God and Love. For the most part, Kierkegaard equates God with Love.[3] Thus, when a person engages in the act of loving, he is in effect achieving an aspect of the divine. Kierkegaard also viewed the individual as a necessary synthesis of both finite and infinite elements. Therefore, when an individual does not come to a full realization of his infinite side, he is said to be in despair. For many contemporary Christian theologians, the notion of despair can be viewed as sin. However, to Kierkegaard, a man sinned when he was exposed to this idea of despair and chose a path other than one in accordance with God's will.

A final major premise of Christian existentialism entails the systematic undoing of evil acts. Kierkegaard asserted that once an action had been completed, it should be evaluated in the face of God, for holding oneself up to divine scrutiny was the only way to judge one's actions. Because actions constitute the manner in which something is deemed good or bad, one must be constantly conscious of the potential consequences of his actions. Kierkegaard believed that the choice for goodness ultimately came down to each individual. Yet Kierkegaard also foresaw the potential limiting of choices for individuals who fell into despair.[4]

Christian Existentialism often refers to what it calls the indirect style of Christ's teachings, which it considers to be a distinctive and important aspect of his ministry. Christ's point, it says, is often left unsaid in any particular parable or saying, to permit each individual to confront the truth on his own.[5] This is particularly evident in (but is certainly not limited to) his parables. For example, in the Gospel of Matthew (18:21-35), Jesus tells a story about a man who is heavily in debt (the parable of the unforgiving servant). The debtor and his family are about to be sold into slavery, but he pleads for their lives. His master accordingly cancels the debt and sets them free. Later the man who was in debt abuses some people who owe him money, and he has them thrown in jail. Upon being informed of what this man has done, the master brings him in and says, "Why are you doing this? Weren't your debts canceled?" Then the debtor is thrown into jail until the debt is paid. Jesus ends his story by saying, "This is how it will be for you if you do not forgive your brother from your heart."

Often Christ's parables are a response to a question he is asked. After he tells the parable, he returns the question to the individual who originally asked it. Often we see a person asking a speculative question involving one's duty before God, and Christ's response is more or less the same question—but as God would ask that individual. For example, in the Gospel of Luke (10:25), a teacher of the law asks Jesus what it means to love one's neighbor as oneself. Jesus replies by telling the story of the Good Samaritan. In the story a man is beaten by thieves. A priest and a Levite pass him by, but a Samaritan takes pity on him and generously sets him up at an inn—paying his tab in advance. Then Jesus returns the question, "Which of these three do you think was a neighbor to the man who fell into the hands of robbers?". Jesus does not answer the question because he requires the individual to answer it, and thus to understand existence in the Bible, one must recognize who that passage is speaking to in particular. To Kierkegaard, it is the individual hearing the passage.

A good example of indirect communication in the Old Testament is the story of David and Nathan in 2 Samuel 12:1-14. David had committed adultery with a woman, Bathsheba, which resulted in her pregnancy. He then ordered her husband, Uriah, to come home from a war front so that he might sleep with his wife, thus making it appear as if Uriah had in fact conceived with Bathsheba. Instead, Uriah would not break faith with his fellow soldiers still on the battlefield and refused to sleep with her. David then ordered him back out to the battlefront where he would surely die, thus making Bathsheba a widow and available for marriage, which David soon arranged. David initially thought he had gotten away with murder, until Nathan arrived to tell him a story about two men, one rich and the other poor. The poor man was a shepherd with only one lamb, which he raised with his family. The lamb ate at his table and slept in his arms. One day a traveler came to visit the rich man; instead of taking one of his own sheep, the rich man seized the ewe lamb that belonged to the poor man and prepared it for his guest. When Nathan finished his story, David burned with anger and said (among other things): "As surely as the Lord lives, the man who did this deserves to die!". Nathan responded by saying "You are the man!". Realizing his guilt, David becomes filled with terror and remorse, tearfully repenting of his evil deed.

An existential reading of the Bible demands that the reader recognize that he is an existing subject, studying the words that God communicates to him personally. This is in contrast to looking at a collection of "truths" which are outside and unrelated to the reader.[6] Such a reader is not obligated to follow the commandments as if an external agent is forcing them upon him, but as though they are inside him and guiding him internally. This is the task Kierkegaard takes up when he asks: "Who has the more difficult task: the teacher who lectures on earnest things a meteor's distance from everyday life, or the learner who should put it to use?"[7] Existentially speaking, the Bible doesn't become an authority in a person's life until they permit the Bible to be their personal authority.

The roots of existentialism have been traced back as far as St Augustine.[9][10][11] Some of the most striking passages in Pascal's Pensées, including the famous section on the Wager, deal with existentialist themes.[12][13][14][15] Jacques Maritain, in Existence and the Existent: An Essay on Christian Existentialism,[16] finds the core of true existentialism in the thought of Thomas Aquinas.