Prayer is an important activity in Christianity, and there are several different forms of Christian prayer.[1]

Christian prayers are diverse: they can be completely spontaneous, or read entirely from a text, like the Anglican Book of Common Prayer. The most common prayer among Christians is the "Lord's Prayer", which according to the gospel accounts (e.g. Matthew 6:9-13) is how Jesus taught his disciples to pray.[2] "The Lord's Prayer" is a model for prayers of adoration, confession and petition in Christianity.[2]

A broad, three stage characterization of prayer begins with vocal prayer, then moves on to a more structured form in terms of meditation, then reaches the multiple layers of contemplation,[3][4] or intercession.

There are two basic settings for Christian prayer: corporate (or public) and private. Corporate prayer includes prayer shared within the worship setting or other public places. These prayers can be formal written prayers or informal extemporaneous prayers. Private prayer occurs with the individual praying either silently or aloud within a private setting. Prayer exists within multiple different worship contexts and may be structured differently. These types of contexts may include:

Liturgical: Often seen within the Catholic Church. This is a very orthodox service. Within a Catholic Mass, which is an example of a liturgical form of worship, there are bible readings and a sermon is read.

Non- Liturgical: Often seen within Evangelical church, this prayer is often not scripted and would be more informal in structure. Most of these prayers would be extemporaneous.

Charismatic: Often seen within gospel churches. It is the main form of worship in Pentecostal churches. It usually includes song and dance, and may include other artistic expressions. There may be no apparent structure, but the worshippers will be "led by the Holy Spirit".

Prayer in the New Testament is presented as a positive command (Colossians 4:2; 1 Thessalonians 5:17). The people of God are challenged to include prayer in their everyday life, even in the busy struggles of marriage (1 Corinthians 7:5) as it is thought to bring the faithful closer to God.

Prayer, according to the Book of Acts, can be seen at the first moments of the church (Acts 3:1). The apostles regarded prayer as an essential part of their lives (Acts 6:4; Romans 1:9; Colossians 1:9). As such, the apostles frequently incorporated verses from Psalms into their writings. Romans 3:10-18 for example is borrowed from Psalm 14:1-3 and other psalms.

In the early Church

Prayer was frequently found in the gatherings of the early church, offered frequently throughout the worship service with the Lord's Prayer taking its place as the anchor - a common ritual in each gathering.[citation needed] 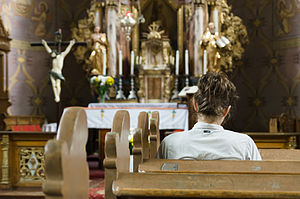 Woman praying in a church. 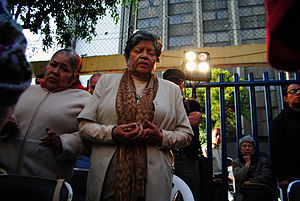 Elements of the oldest Christian prayers may be found in liturgies such as the Roman Catholic Tridentine Mass which is based on the Liturgy of St James, the Mass of Paul VI, the Orthodox Divine Liturgy, the Anglican Book of Common Prayer, and the Lutheran Book of Worship.

Many denominations that adhere to a liturgical tradition use specific prayers geared to the season of the Liturgical Year, such as Advent, Christmas, Lent and Easter. Some of these prayers are found in the Roman Breviary, the Liturgy of the Hours, the Orthodox Book of Needs and the Anglican Book of Common Prayer.

Main articles: Communion of Saints and Intercession of saints

The ancient church, in both Eastern Christianity and Western Christianity, developed a tradition of asking for the intercession of (deceased) saints, and this remains the practice of most Eastern Orthodox, Oriental Orthodox, Roman Catholic, and some Anglican churches. Churches of the Protestant Reformation however rejected prayer to the saints, largely on the basis of the sole mediatorship of Christ.[5] The reformer Huldrych Zwingli admitted that he had offered prayers to the saints until his reading of the Bible convinced him that this was idolatrous.[6]

A Carmelite nun meditating on the Bible.

Christian meditation aims to heighten the personal relationship based on the love of God that marks Christian communion.[9][10]

At times there may be no clear-cut boundary between Christian meditation and Christian contemplation, and they overlap. Meditation serves as a foundation on which the contemplative life stands, the practice by which someone begins the state of contemplation.[11] In contemplative prayer, this activity is curtailed, so that contemplation has been described as "a gaze of faith", "a silent love".[12]

This kind of prayer involves the believer taking the role of an intercessor, praying on behalf of another individual, group or community, or even a nation.

Traditional Christian prayer requested people to thank God, as well as tell God their own request. When their prayers seemed unanswered, some would feel that God did not hear them or did not respond to them. Listening prayer asks: "Was it that God did not respond to you, or was it that you did not hear from God"? Listening prayer requires those praying to calm their minds down and read the Scripture. During the reading, some sentences may pop into mind, as if in answer to their prayers.

Prayer books as well as tools such as prayer beads such as chaplets are used by Christians. Images and icons are also associated with prayers in some Christian denominations.

There is no one prayerbook containing a set liturgy used by all Christians; however many Christian denominations have their own local prayerbooks, for example: