Christopher Maurice Andrew (born 23 July 1941) is an historian at the University of Cambridge with a special interest in international relations and in particular the history of intelligence services.

Andrew is Professor of Modern and Contemporary History, former Chairman of the History Faculty at Cambridge University, Official Historian of the Security Service (MI5), Honorary Air Commodore of 7006 (VR) Intelligence Squadron in the Royal Auxiliary Air Force, Chairman of the Cambridge Intelligence Seminar, and former Visiting Professor at Harvard, Toronto and Canberra. Professor Andrew is also co-editor of Intelligence and National Security, and a regular presenter of BBC Radio and TV documentaries, including the Radio Four series What If?. His twelve previous books include a number of path-breaking studies on the use and abuse of secret intelligence in modern history. He is currently a governor of Norwich School where in the 1950s he was a pupil, and has recently retired from his post as President of Corpus Christi College, Cambridge.

Professor Andrew's reputation as an historian of intelligence studies was cemented with two studies completed in collaboration with two defectors and former KGB officers, Oleg Gordievsky and Vasili Mitrokhin. The first of these works, KGB: The Inside Story was a scholarly work on the history of KGB actions against Western governments produced from archival and open sources, with the critical addition of information from the KGB defector Gordievsky. His two most detailed works about the KGB were produced in collaboration with KGB defector and archivist Vassili Mitrokhin, who over the course of several years recopied vast numbers of KGB archive documents as they were being moved for long storage. Exfiltrated by the Secret Intelligence Service in 1992, Mitrokhin and his documents were made available to Andrew after an initial and thorough review by the security services. Both volumes, 1999's The Sword and the Shield: The Mitrokhin Archive and the Secret History of the KGB and the 2005 edition The World Was Going Our Way: The KGB and the Battle for the Third World (both volumes simply titled The Mitrokhin Archive in UK publication) resulted in some public scandal as they revealed the names of former KGB agents and collaborators in government, industry and private life around the world.[2] Most famous amongst these was the revelation in 1999 of the "Grandmother Spy", 87-year-old Melita Norwood, who had passed industrial information and other intelligence to the KGB for more than 50 years.[3] 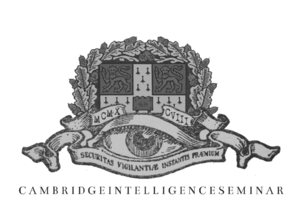 The Cambridge Intelligence Seminar, chaired by Professor Andrew (and founded by his late mentor Harry Hinsley), convenes regularly in rooms at Corpus Christi College, Cambridge. Active and former senior members of various intelligence services around the world participate in the discussions, with most participants made up of Andrew's graduate students, fellow historians and other academics. At these meetings, detailed analysis of various past and present intelligence affairs is discussed under the Chatham House Rule, with the confidence that it will not be attributed to a person or organisation.[4]

In February 2003, Andrew accepted the post of official historian for the Security Service MI5, being mandated to write an official history of the service due for their centennial in 2009. This appointment - which entailed Andrew's enrollment into the Security Service - drew criticism from some historians and commentators. In general, these criticisms drew heavily on the suggestion that he was too close to MI5 to be impartial, and that indeed his link with the Service (formalised with his privileged access to the defectors Gordievsky and Mitrokhin) made him a "court historian" instead of a clear-eyed and critical historian.[5] Persistent—if unfounded—rumours that Andrew was "MI5's main recruiter in Cambridge" have done little to quiet critics.[6] Professor Andrew's response to these criticisms has been that he cannot afford to be biased towards the service. As The Guardian quoted Andrew, "Posterity and postgraduates are breathing down my neck. I tell my PhD students: I know you can only get on in the profession by assaulting teachers. You are not going to make a reputation by saying 'Look, Professor Andrew was right all along the line'."[5] MI5's files will eventually be opened to others to inspect, and Andrew suggests that should he white-wash the history now, he will be found out and his entire corpus of work undermined.[citation needed]