From Infogalactic: the planetary knowledge core
Jump to: navigation, search
For other uses, see Chukotka.

The autonomous okrug's surface area is 737,700 square kilometers (284,800 sq mi). The principal town and the administrative center is Anadyr. The region is the most northeasterly region of Russia and, since the sale of Alaska to the United States, has been the only part of Russia lying partially in the Western Hemisphere (east of the 180th meridian).

Elgygytgyn Lake, an impact crater lake, is located in Chukotka, as is the village of Uelen, the closest substantial Russian settlement to the United States. 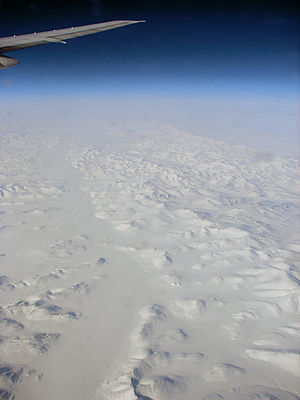 Chukotka is bordered in the north by the Chukchi Sea and the East Siberian Sea, which are part of the Arctic Ocean; in the east by the Bering Strait and the Bering Sea, part of the Pacific Ocean; in the south by Kamchatka Krai and Magadan Oblast; and in the west by the Sakha Republic. The Chukchi Peninsula projects eastward forming the Bering Strait between Russia and Alaska, and encloses the north side of the Gulf of Anadyr. The peninsula's easternmost point, Cape Dezhnev, is also the easternmost point of mainland Russia.

Ecologically, Chukotka can be divided into three distinct areas: the northern Arctic desert, the central tundra, and the taiga in the south. About half of its area is above the Arctic Circle. This area is very mountainous, containing the Chukotsky Mountains and the Anadyr Range.

Chukotka's rivers spring from its northern and central mountains. The major rivers are:

The largest lakes are Lake Krasnoye, west of Anadyr, and El'gygytgyn Lake in central Chukotka.

Large parts of Chukotka are covered with moss, lichen, and arctic plants, similar to western Alaska. Surrounding the Gulf of Anadyr and in the river valleys grow small larch, pine, birch, poplar, and willow trees. More than 900 species of plants grow in Chukotka, including 400 species of moss and lichen. It is home to 220 bird species and 30 fresh water fish species.[15]

Chukotka's climate is influenced by its location on the three neighboring seas: the Bering Sea, the East Siberian Sea, and the Chukchi Sea. The weather is characterized by cold northerly winds that can quickly change to wet southern winds. Cape Navarin has the highest number of hurricanes and storms in Russia. The coastal areas are windy with little precipitation, between 200 and 400 mm per year. Temperature varies from −15 °C (5 °F) to −35 °C (−31 °F) in January and from +5 °C (41 °F) to +14 °C (57 °F) in July. Growing season is short, only 80 to 100 days per year.

The first inhabitants were Paleo-Siberian hunters who came to Chukotka from Central and East Asia. The area was then part of the Beringia land bridge that is believed to have enabled human migration to the Americas.

After the Russians conquered the Kazan and Astrakhan Khanates in the 16th century, the trade routes to the Urals, Siberia, and Central Asia opened for travel and traders and Cossacks moved eastwards. The Cossacks built forts in strategic locations and subjected the indigenous people to the Tsar. 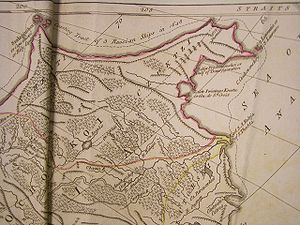 An early (1773) map of Chukotka, showing the route of Dezhnyov expedition of 1648

During the first half of the 17th century, Russians reached the far north-east. In 1641, the first reference to Chukchi people was made by the Cossacks. In 1649, Russian explorer Semyon Dezhnyov explored the far north-eastern coast and established winter quarters on the upstream portion of the Anadyr River that became the fortified settlement of Anadyrsk. Dezhnyov tried to subjugate the Chukchi and exact tribute during the next ten years, but was mostly unsuccessful. Eventually the fort was abandoned because of the harsh northern conditions and lack of game animals for food.

At the end of the 17th century, the fort regained some importance when the sea route from Anadyrsk to Kamchatka was discovered. It was used as the staging base for expeditions to Kamchatka and all other forts and settlements were made subject to Anadyrsk. When the wealth of Kamchatka's natural resources was discovered, the Russian government started to give the far north-eastern region more serious attention. In 1725, Tsar Peter the Great ordered Vitus Bering to explore Kamchatka and Afanasy Shestakov to lead a military expedition to subjugate the Chukchi. This expedition failed when the fleet suffered shipwreck and the survivors, including Shestakov, were killed by the Chukchi.

In 1731, Dmitry Pavlutsky tried again, aided by Cossacks, Yukaghirs, and Koryaks (indigenous Siberian tribes that were subjugated earlier). Pavlutsky sailed up the Anadyr River and destroyed the Chukchi garrison on the Arctic Ocean. His ruthless methods had some limited success in forcing tribute from some Chukchi. But in 1747, the Chukchi defeated the Russian regiment and killed Pavlutsky.

Realizing that the Chukchi could not easily be subjugated by military means, the Russians changed tactics and offered the Chukchi citizenship in the Russian Empire. A peace treaty was concluded in 1778 in which the Chukchi were exempted from paying yasak.

That same year, British Captain James Cook made an exploration of Cape North (now Cape Schmidt) and Providence Bay. Anxious that European powers would occupy the area, Tsaritsa Catherine II ordered to explore and map the area. Starting in 1785, an expedition led by Joseph Billings and Gavril Sarychev mapped the Chukchi Peninsula, the west coast of Alaska, and the Aleutian Islands. Then from 1821 to 1825, Ferdinand von Wrangel and Fyodor Matyushkin led expeditions along the coast of the East Siberian Sea and explored the Kolyma, Great Anyuy, and Little Anyuy Rivers. 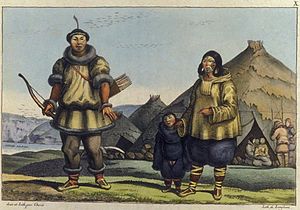 Painting of Chukchi by Louis Choris, 1816

Chukotka remained mostly outside the control of the Russian Empire and consequently other foreign powers (American, British, Norwegian) began to hunt and trade in the area from about 1820 onwards. After the sale of Alaska to the United States, American whalers and traders especially extended their activities into Chukotka and foreign influence reached its peak. By 1880, the Russians reacted by setting up coastal patrols to stop American ships and confiscate their property. And in 1888, the administrative region of Anadyr was created. Yet Russian control diminished again and around 1900, a large stream of foreigners entered Chukotka, lured to the region by the Yukon gold rush in 1898.

In 1909, in order to keep the region within Russian control, two districts were created within the Anadyr Region: the districts of Anadyr and Chukotka. The Russian government granted concessions to foreign companies such as the Hudson's Bay Company and the US Northeast Siberia Company, which was granted gold, iron, and graphite mining rights in the entire Chukotka between 1902 and 1912.

Wrangel Island in particular was subject to claims by the United States and Canada. In 1916, the Russians officially claimed the uninhabited island. But in 1921, Canadian Vilhjalmur Stefansson made a serious attempt to claim it for Canada by populating it and building a small settlement. Another contingent arrived in 1923 but a year later, the Soviets permanently conquered the island, removing the remaining inhabitants, and thereby ending all foreign influence.

From 1919 onwards, the region was subject to collectivization and resettlement of the indigenous people.

When Nazi Germany attacked the Soviet Union in 1941, everything was done to start tin production as quickly as possible in Chukotka. Mining rapidly developed, and this industry would become its economic base. Also during the war, geologists discovered large reserves of gold that would be mined in the 1950s. 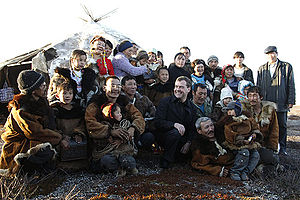 From 2001 to 2008, Roman Abramovich was the Governor of Chukotka. He invested billions of rubles, including his own money, into the Chukotka economy by developing its infrastructure, schools, and housing. This has helped to double the GDP of the region and to more than triple the income of its residents.[16] In 2004, Abramovich tried to resign from this position but was reappointed governor for another term by Vladimir Putin. In early July 2008 it was announced that President Dmitry Medvedev had accepted Abramovich's latest request to resign as governor of Chukotka, although his various charitable activities in the region would continue. In the period 2000–2006 the average salaries in Chukotka increased from about US$165 (€117/£100) per month in 2000 to US$826 (€588/£500) per month in 2006.[17]

On July 11, Dmitry Medvedev nominated Roman Kopin to be the governor. On 13 July the local legislators unanimously confirmed Kopin as the next governor of Chukotka.[18]

Chukotka has large reserves of oil, natural gas, coal, gold, and tungsten, which are slowly being exploited, but much of the rural population survives on subsistence reindeer herding, whale hunting, and fishing. The urban population is employed in mining, administration, construction, cultural work, education, medicine, and other occupations.

Chukotka is mostly roadless and air travel is the main mode of passenger transport. There are local permanent roads between some settlements, for example Egvekinot-Iultin (200 km). When cold enough, winter roads are constructed on the frozen rivers to connect region settlements in a uniform network.

In 2009, replacement of the emergency bridge through Loren River on constantly operating local road from Lavrentiya to Lorino (40 km) became the main event of transport of Chukotka.

The main airport is Ugolny Airport near Anadyr. Coastal shipping also takes place, but the ice situation is too severe for at least half the year. 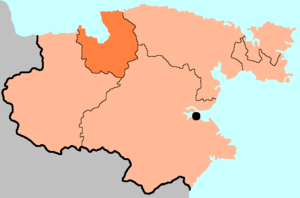 Chukotka Autonomous Okrug is administratively divided into the following districts:

Along the Pacific coast (from north to south): Providensky District south of Chukotsky, southern Iultinsky District around Kresta Bay, and finally eastern Anadyrsky District at the Anadyr Estuary.

Interior: The western quarter of the Okrug is Bilibinsky District and the rest of the interior is Anadyrsky District. 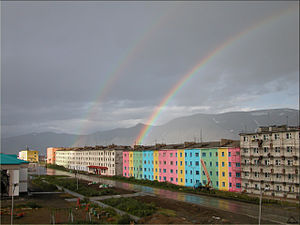 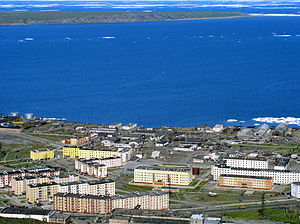 According to the 2010 Census, the ethnic composition was:[10]

Historical figures are given below:

Ethnographic maps shows the Yupik peoples as the indigenous population of some villages near Provideniya, Chuvans in the Chuvanskoye village some 100 km west of Markovo, the Evens in some inland areas, and the Chukchi throughout the rest of the region.[23]

The Russian Orthodox Church in Chukotka is represented by the Eparchy (Diocese) of Anadyr and Chukotka (Russian: Анадырская и Чукотская епархия). The controversial conservative Bishop of Anadyr and Chukotka, Diomid, who had occupied the Anadyr see since 2000 and had been instrumental in the development of the church in the peninsula, was removed by the Holy Synod in the summer of 2008. The diocese has been since run by the archbishop of Khabarovsk and the River, Mark (Tuzhikov) (ru).

The current governor of Chukotka is Roman Kopin. He replaced business oligarch Roman Abramovich in July 2008. Abramovich had spent over US$1 billion in the region (partly as normal tax payments) on developing infrastructure and providing direct aid to the inhabitants[24] during his time as governor from 2000. In 2004 there were also reports, however, that Chukotka gave Abramovich's company Sibneft tax breaks in excess of US$450 million.[25]