Chulalongkorn University is ranked the top university in Thailand in every field and is also guaranteed excellent university by Office of Nation Education Standards and Quality Assessment of Thailand. CU is one of the National Research University moreover, CU is the only Thai university which is a member of Association of Pacific Rim Universities(APRU). Admission to CU is highly competitive and the applicants are required to have very high score. The top ten of appricants who has the highest national score choose to study in CU.[3] 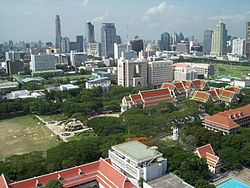 It comprises nineteen faculties,a School of Agicultural, three colleges and fourteen institutes. Its campus occupies a vast area in downtown Bangkok. Graduates receive their diplomas from the King of Thailand, a tradition begun by King Prajadhipok (Rama VII); the incumbent, King Bhumibol Adulyadej (Rama IX), delegates the role to one of his daughters, Princess Maha Chakri Sirindhorn, due to ill health. 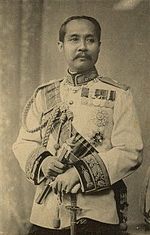 The university was named after King Chulalongkorn

The demands of officials specialized in various fields by the government in the late 19th century Siam was an result of King Chulalongkorn’s bureaucratic reforms, which aimed to transform the feudal Thai society into a modernized state. In 1899, the king founded the Civil Service Training School[4] near the northern gate of the Royal Palace. Those who graduated from the school would become royal pages. Being royal pages, they learned how to administer organizations by working closely with the king, which was a traditional way of entrance to Siamese bureaucracy. After being royal pages, they would then serve in the Mahattai Ministry or other government ministries.

On April 1, 1902[5] the king thought the name of the school should be renamed to increase dignity of students and graduates. Hence the name Royal Pages School (Thai: โรงเรียนมหาดเล็ก) was later used. Later, on January 1, 1911,[6] King Vajiravudh renamed the school again to Civil Service College of King Chulalongkorn (Thai: โรงเรียนข้าราชการพลเรือนของพระบาทสมเด็จพระจุลจอมเกล้าเจ้าอยู่หัว) as a memorial to his father and moved the school to Windsor Palace (Thai: วังวินด์เซอร์ หรือวังใหม่) in the Pathumwan district.

The academic demands, however, increased all over the country as a whole as Siam was modernized. King Vajiravudh then took the remaining funds of Chulalongkorn’s Royal Equestrian Statue construction, which was collected from people. Then combined with his own funds to subsidize the construction of a university campus. The king organized various schools around the city proper into the Chulalongkorn's College. The college offered 8 majors taught by 5 schools including;

King Rama VI then realized that the education should be provided to all people not only for the bureaucrats. On March 26, 1917, the college was upgraded to the Chulalongkorn University (Thai: จุฬาลงกรณ์มหาวิทยาลัย),[7] and the schools were transformed into four faculties: Faculty of Arts and Sciences, Faculty of Public Administration, Faculty of Engineering, and Faculty of Medicine. 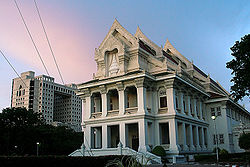 The university firstly granted certificates to its graduates. The education for a degree was then prepared. The Rockefeller Foundation reorganized the curriculum of the Faculty of Medicine. In 1923, the Faculty of Medicine became the first faculty to accept students from the secondary education (known as Mattayom). The remaining faculties then followed suit. After the 1932 Revolution, the Khana Ratsadon wanted the legal and political studies to be independent from "royalists'" Chulalongkorn University so they took the Faculty of Law and Political Science into their new Thammasat University in 1933. 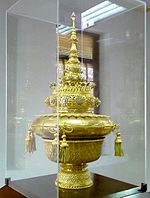 Since the establishment of the Royal Pages School, the former name of the university, Chulalongkorn authorized the use of his personal emblem as school emblem.[8] The emblem is 'Phra Kiao', or Thai style coronet which is made to fit hair topknot. As the school was transformed into university, the King of Thailand authorized the use of Phra Kiao until nowadays. Today, Phra Kiao is used in formal letters, transcripts, souvenirs made by university and student uniforms.

Originally, the university uniform was adapted from uniform worn by Chulalongkorn's heirs.[9] Later, the uniform was changed into more modernized version but original one is reserved as a formal uniform. Formal uniform is usually worn by student leaders and bachelor graduates.

Today, the normal uniform for male undergraduate students are plain white shirt with long or short sleeves and black (or dark blue) trousers. Dark blue necktie with colored Phra Kiao in its front is required for first year students but optional for higher years. However, black tie with silver Phra Kiao pin is usually used by higher year students in some faculties. For female students, they are required to wear short-sleeved blouse with fold along the spine. The buttons must be made of metal and Phra Kiao emblem must be pinned on right chest. Slightly dark blue or black pleated skirt and any black, white, brown shoes that conceal heels are also required. For female first year students, white leather shoes are required.[10] Chulalongkorn University's uniform has long been template of uniforms used in other universities in Thailand.

The academic dress of Chulalongkorn University is based on ceremonial attire called suea krui, which is long-sleeved robe made of very fine mesh. Like dresses worn in United Kingdom, the robe is open-fronted and calf-length. Cap and hood, however, are omitted. Colored felt strip decorated with gold-colored ribbon is attached to the margin of the gown including elbow and wrist. Bachelors and masters use black strip, while respective scarlet and pink are for doctors (including honorary degrees recipients) and lecturers. Yellow strip is used specially for the king of Thailand.[11]

In addition, the colored yarn (bachelor) or ribbon (master and doctor) is added to the center of the strip longitudinally, according to degree-granting faculty.[12] The gown was authorized for use by Vajiravudh.[13] 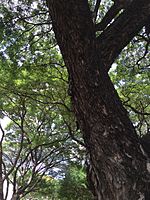 Rain tree is very common on the university campus. It was deeply associated to the university since the past. Fresh green leaves in the beginning of the semester represent freshmen's enjoyment. As the tree produces slimy pods and sheds leaves, the below ground becomes dirty and slippery. As a simile, it is described as a warning to students to be ready for examination. When they walk carefully, they do not slip (able to pass examination). Whereas if they walk carelessly, they would slip and get injured (unable to pass examination).[14]

Around 1937–1957, many rain trees were to be cut down to allocate the area for new buildings and enhance cleanliness. The King Bhumibol Adulyadej recognized the dramatic decrease in the number of rain trees. Hence on January 15, 1962 the king planted five trees that he brought from Hua Hin in front of the university auditorium and said "Hence I give these five trees as eternal memorial" (Thai: จึงขอฝากต้นไม้ไว้ห้าต้นให้เป็นเครื่องเตือนใจตลอดกาล). 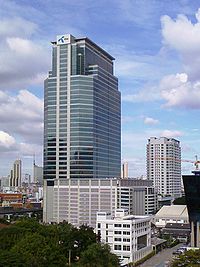 Chamchuri Square, a high-rise building complex near the Faculty of Commerce and Accountancy, is owned by Chulalongkorn University

Chulalongkorn University consists of 19 faculties, 3 colleges, 1 school and many institutes which function as a teaching and researching unit.[15][16]

Office of Commission on Agricultural Resource Education (OCARE) was established in 2009.[19] It is actually not administration office but school in which teaching and research are carried out. It intakes students from two groups: one from Northern Thailand provinces (Nan, Phayao, Phrae, Uttaradit) and another from the rest of country. It has been upgraded into School of Agricultural Resources with full degree-granting power by university council on 5 March 2014.[16]

Chulalongkorn University has research organizations in many fields of study.

The other research organnization is Unisearch which has the purpose to promote academic staffs and researchers to publish their researches and The Intellectual Property Institute has the purpose to register patents. CU also supports endownment to set up Research Units(RU) and Center of Excellence(CE). Nowadays, CU has over 100 research units and 20 national Center of Excellence.

In the Webometric ranking, Chulalongkorn was ranked 422 in world rankings and 69 in Asia ranking in 2015.[29] Webometrics ranking indicates quantity and quality is the university's medium, considered by being searched by search engines, online documents and citations in Google Scholar.

In the SCImago institutions Ranking, which ranks international researches of universities. Chulalongkorn was ranked 479 in world rankings and the 1st in national rankings since 2009.[30]

In the Center for World University Ranking or CWUR, Chulalongkorn was ranked the 1st in national rankings and 311 in world rankings in 2015, considered by alumni, researches, quality of curriculums and instructors.[31]

In U.S. News & World Report, Chulalongkorn was ranked the 2nd in national rankings and the 579 in world rankings,[32] considered by the university's reputation, medium, citations, international cooperation, quantity of PhD students, etc.

The university suffered a drop in academic reputation in the Times Asia University Rankings 2014, and fell out of the top 100 universities in Asia, losing ground to King Mongkut's University of Technology Thonburi (number 50) and Mahidol University (number 82).[33]

The University has given honorary degrees to heads of state and other international dignitaries, including two US Presidents: 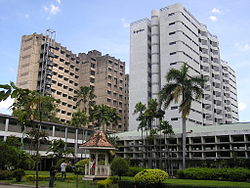 The University is host to 40 student clubs, including the Buddhism and Tradition Club, the Religious Studies Club, the Mind Study Club, and the Thai Classical Music Club. Chulalongkorn also have a Morals Network, which actively campaigns to protect student activities from damaging the university's reputation. The University's Cheer Club annually organizes the Chula-Thammasat traditional football match. 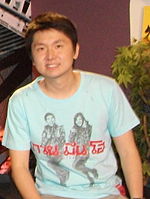 The university Robocup team, Plasma‐Z, got several prizes from the robotics competition as follow.[35]

Moreover, another university Robocup team, Plasma-RX has participated in Rescue robot league at World RoboCup 2008, Suzhou, China, and won the first prize and the best-in-class in mobility award.[36][37]