The Chumashan languages may be, along with Yukian and perhaps languages of southern Baja such as Waikuri, one of the oldest language families established in California, before the arrival of speakers of Penutian, Uto-Aztecan, and perhaps even Hokan languages. Chumashan, Yukian, and southern Baja languages are spoken in areas with long-established populations of a distinct physical type. The population in the core Chumashan area has been stable for the past 10,000 years. However, the attested range of Chumashan is recent (within a couple thousand years). There is internal evidence that Obispeño replaced a Hokan language and that Island Chumash mixed with a language very different from Chumashan; the islands were not in contact with the mainland until the introduction of plank canoes in the first millennium AD.[3]

Six Chumashan languages are attested, all now extinct. However, most of them are in the process of revitalization, with language programs and classes. Contemporary Chumash people now prefer to refer to their languages by native names rather than the older names based on the local missions.

1. Obispeño (also known as Northern Chumash) (†)
Also known as Tilhini by students of the language, after the name of the major village near which the mission was founded.

a. Island Chumash (mixed with non-Chumash)

Obispeño was the most divergent Chumashan language. The Central Chumash languages include Purisimeño, Ineseño, Barbareño and Ventureño. There was a dialect continuum across this area, but the form of the language spoken in the vicinity of each mission was distinct enough to qualify as a different language.

There is very little documentation of Purisimeño. Ineseño, Barbareño and Ventureño each had several dialects, although documentation usually focused on just one. Island Chumash had different dialects on Santa Cruz Island and Santa Rosa Island, but all speakers were relocated to the mainland in the early 19th century. John Peabody Harrington conducted fieldwork on all the above Chumashan languages, but obtained the least data on Island Chumash, Purisimeño, and Obispeño. There is no linguistic data on Cuyama, though ethnographic data suggests that it was likely Chumash (Interior Chumash). 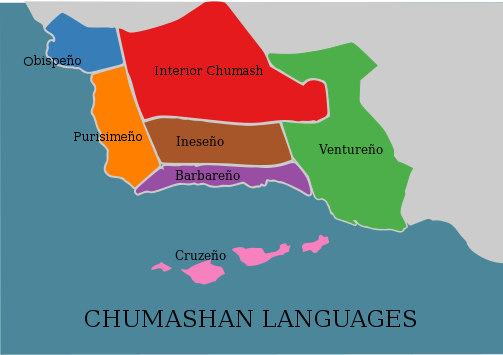 There are six or seven Chumashan languages, depending in part on how one interprets the status of the poorly attested Interior Chumash (Cuyama) as a distinct language.

The languages are named after the local Franciscan Spanish missions in California where Chumashan speakers were relocated and aggregated between the 1770s and 1830s:

Roland Dixon and Alfred L. Kroeber suggested that the Chumashan languages might be related to the neighboring Salinan in a Iskoman grouping.[4] Edward Sapir accepted this speculation and included Iskoman in his classification of Hokan.[5] More recently it has been noted that Salinan and Chumashan shared only one word, which the Chumashan languages probably borrowed from Salinan (the word meant 'white clam shell' and was used as currency).[6] As a result, the inclusion of Chumashan into Hokan is now disfavored by most specialists, and the consensus is that Chumashan has no identified linguistic relatives.[7]

The Central Chumash languages all have a symmetrical six-vowel system. The distinctive high central vowel is written various ways, including /ɨ/ "barred I," /ə/ "schwa" and /ï/ "I umlaut." Contemporary students/users of the languages favor /ɨ/ or /ə/.

Striking features of this system include