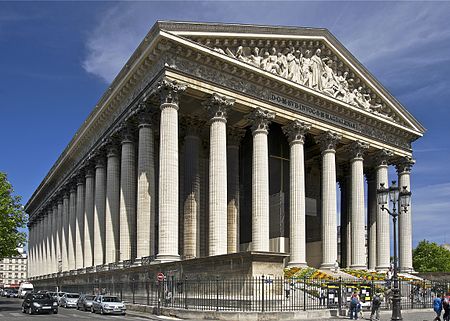 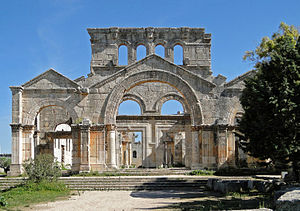 The Church of Saint Simeon Stylites in Aleppo, Syria is considered to be one of the oldest surviving church buildings in the world.

A church building, often simply called a church, is a building used for religious activities, particularly worship services. The term in its architectural sense is most often used by Christians to refer to their religious buildings; they can be used by other religions.[1] In traditional Christian architecture, the church is often arranged in the shape of a Christian cross. When viewed from plan view the longest part of a cross is represented by the aisle and the junction of the cross is located at the altar area.

Towers or domes are often added with the intention of directing the eye of the viewer towards the heavens and inspiring church visitors. Modern church buildings have a variety of architectural styles and layouts; many buildings that were designed for other purposes have now been converted for church use; and, similarly, many original church buildings have been put to other uses.

The earliest identified Christian church was a house church founded between 233 and 256. During the 11th through 14th centuries, a wave of building of cathedrals and smaller parish churches occurred across Western Europe. A cathedral is a church, usually Roman Catholic, Anglican, Oriental Orthodox or Eastern Orthodox, housing the seat of a bishop. 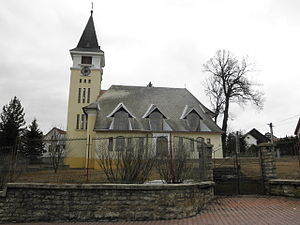 In Greek, the adjective kyriak-ós/-ē/-ón means "belonging, or pertaining, to a Kýrios" ("Lord"), and the usage was adopted by early Christians of the Eastern Mediterranean with regard to anything pertaining to the Lord Jesus Christ: hence "Kyriakós oíkos" ("house of the Lord", church), "Kyriakē" ("[the day] of the Lord", i.e. Sunday), or "Kyriakē proseukhē" (the "[Lord's prayer]").

In standard Greek usage, the older word "ecclesia" (ἐκκλησία, ekklesía, literally "assembly", "congregation", or the place where such a gathering occurs) was retained to signify both a specific edifice of Christian worship (a "church"), and the overall community of the faithful (the "Church"). This usage was also retained in Latin and the languages derived from Latin (e.g. French église, Italian chiesa, Spanish iglesia, Portuguese igreja, etc.), as well as in the Celtic languages (Welsh eglwys, Irish eaglais, Breton iliz, etc.) and in Turkish (kilise).

In the Germanic and some Slavic languages, the word kyriak-ós/-ē/-ón was adopted instead and derivatives formed thereof. In Old English the sequence of derivation started as "cirice" (Ki-ri-keh), then "churche" (kerke), and eventually "church" in its current pronunciation. German Kirche, Scottish kirk, Russian церковь (tserkov), etc., are all similarly derived.

According to the New Testament, the earliest Christians did not build church buildings. Instead, they gathered in homes (Acts 17:5, 20:20, 1 Cor 16:19) or in Jewish worship places like the Second Temple or synagogues (Acts 2:46, 19:8). The earliest archeologically identified Christian church is a house church, the Dura-Europos church, founded between 233 and 256.[2] 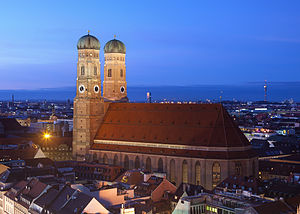 The Frauenkirche in Munich is a largely Gothic, medieval church.

During the 11th through 14th centuries, a wave of building of cathedrals and smaller parish churches occurred across Western Europe. In addition to being a place of worship, the cathedral or parish church was used by the community in other ways. It could serve as a meeting place for guilds or a hall for banquets. Mystery plays were sometimes performed in cathedrals, and cathedrals might also be used for fairs. The church could be used as a place to thresh and store grain.[3] 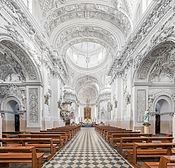 Central nave of St. Peter and St. Paul's Church, Vilnius, Lithuania looking north-east towards the altar. An example of a Baroque church interior.

During the Renaissance thousands of churches were built all throughout Europe and soon the Americas. 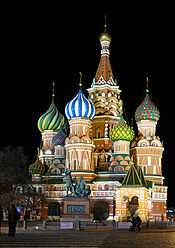 A common architecture for churches is the shape of a cross (a long central rectangle, with side rectangles, and a rectangle in front for the altar space or sanctuary). These churches also often have a dome or other large vaulted space in the interior to represent or draw attention to the heavens. Other common shapes for churches include a circle, to represent eternity, or an octagon or similar star shape, to represent the church's bringing light to the world. Another common feature is the spire, a tall tower on the "west" end of the church or over the crossing. 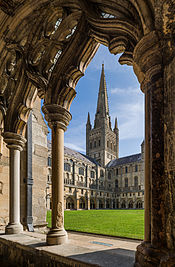 Norwich Cathedral in England is an example of a Cathedral complex built during the Middle Ages.

The Latin word basilica (derived from Greek, Basiliké Stoà, Royal Stoa) was originally used to describe a Roman public building (as in Greece, mainly a tribunal), usually located in the forum of a Roman town.

After the Roman Empire became officially Christian, the term came by extension to refer to a large and important church that has been given special ceremonial rights by the Pope. Thus the word retains two senses today, one architectural and the other ecclesiastical.

A cathedral is a church, usually Roman Catholic, Anglican, Oriental Orthodox or Eastern Orthodox, housing the seat of a bishop. The word cathedral takes its name from cathedra, or Bishop's Throne (In Latin: ecclesia cathedralis). The term is sometimes (improperly) used to refer to any church of great size.

A church that has the function of cathedral is not necessarily a large building. It might be as small as Christ Church Cathedral in Oxford, England, Sacred Heart Cathedral in Raleigh, United States, or Chur Cathedral in Switzerland. However, frequently, the cathedral along with some of the abbey churches, was the largest building in any region.

Old and disused church buildings can be seen as an interesting proposition for developers as the architecture and location often provide for attractive homes[4][5] or city centre entertainment venues[6] On the other hand, many newer Churches have decided to host meetings in public buildings such as schools,[7] universities,[8] cinemas[9] or theatres.[10]

There is another trend to convert old buildings for worship rather than face the construction costs and planning difficulties of a new build. Unusual venues in the UK include an old Tram power station,[11] a former bus garage,[12] an old cinema and bingo hall,[13] a former Territorial Army Drill Hall,[14] a former synagogue[15] and a windmill.

There has been an increase in partnerships between church management and private real estate companies to redevelop church properties into mixed uses. While it has garnered criticism from some, the partnership offers congregations the opportunity to increase revenue while preserving the property.[16]