Chyhyryn (Ukrainian: Чигирин) or Chigirin (Russian: Чигири́н), is a city and important historic site located in the Cherkasy Oblast of central Ukraine. From 1648 to 1669 the city was the Hetman capital of the Cossack Hetmanate and a traditional place for the appointment to the office of Hetman of Zaporizhian Host.

Today the city resting on the banks of Tiasmyn River is the administrative center of the Chyhyryn Raion with its current population estimated at just over 10,000. The city lies at an altitude of 124 metres above mean sea level. Minor industries, such as food and furniture factories, exist in the town today.

The area (1320–1569) had been part of the Grand Duchy of Lithuania. It was ceded to the Polish–Lithuanian Commonwealth (in the Kijów Voivodeship of the Crown of Poland) before the Union of Lublin. It was granted Magdeburg Rights in 1592 by Sigismund III Vasa. 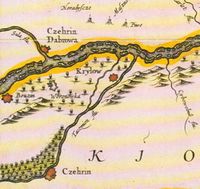 Chyhyryn is first mentioned as a fortified Cossack winter station. In 1638, Bohdan Khmelnytsky became its starosta (regional leader), and in 1648 it became the newly elected Hetman's residence and the capital of the Cossack state, the Zaporozhian Host. In 1669 upon the election of Demian Mnohohrishny as the Hetman of Ukraine, the capital was moved to Baturyn. During the Russo-Turkish War (1676–1681) it was the center of two bloody campaigns (1675–76 and 1677–78). In 1678 the castle of Chyhyryn was blown up by the retreating Russian garrison that was stationed there, while the Turkish forces sacked the rest of the city. After this, it gradually lost its significance. It remained the center of the Chyhyryn regiment until 1712 and upon the final incorporation into the Russian Empire (1793) it became part of the Kiev region.

The Trinity Monastery, built near Chyhyryn in 1627, was later destroyed by the Soviet authorities. Other historical landmarks, such as the town hall and Khmelnytsky's palace, did not survive either. After Ukraine regained independence, Hetman's residence was restored and became a museum.

Chyhyryn is twinned with: