From Infogalactic: the planetary knowledge core
Jump to: navigation, search
"Cimmerian" redirects here. It is not to be confused with Cimmeria.

The Cimmerians (also Kimmerians, Greek Κιμμέριοι Kimmerioi) are an ancient people, first mentioned in the late 8th century BC in Assyrian records.

Likely originating in the Pontic steppe and invading by means of the Caucasus, they probably assaulted Urartu, a state in north eastern Anatolia subject to the Neo-Assyrian Empire, in c. 714 BC. They were defeated by Assyrian forces under Sargon II in 705 and turned towards Anatolia, conquering Phrygia in 696/5. They reached the height of their power in 652 after taking Sardis, the capital of Lydia; however an invasion of Assyrian controlled Anshan (Persia) was thwarted by the Assyrians. Soon after 619, Alyattes of Lydia defeated them. There are no further mentions of them in historical sources, but it is likely that they settled in Cappadocia.[1]

The origin of the Cimmerians is unclear. They are mostly supposed to have been related to either Iranian or Thracian speaking groups which migrated under pressure of the Scythian expansion of the 9th to 8th century BC.[2][3][4]

According to Herodotus, the Cimmerians inhabited the region north of the Caucasus and the Black Sea during the 8th and 7th centuries BC (i.e. what is now Ukraine and Southern Russia), although it isn't possible to identify the Cimmerians as the bearers of any specific archaeological culture in the region.[5][6] 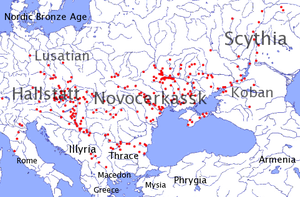 Distribution of "Thraco-Cimmerian" finds according to Soviet archaeology.[7]

The supposed origin of the Cimmerians north of the Caucasus at the end of the Bronze Age loosely corresponds with the early Koban culture (Northern Caucasus, 12th to 4th centuries BC), but there is no compelling reason to associate this culture with the Cimmerians specifically.[6]

The use of the name "Cimmerian" in this context is due to Paul Reinecke, who in 1925 postulated a "North-Thracian-Cimmerian cultural sphere" (nordthrakisch-kimmerischer Kulturkreis) overlapping with the younger Hallstatt culture of the Eastern Alps. The term Thraco-Cimmerian (thrako-kimmerisch) was first introduced by I. Nestor in the 1930s. Nestor intended to suggest that there was a historical migration of Cimmerians into Eastern Europe from the area of the former Srubna culture, perhaps triggered by the Scythian expansion, at the beginning of the European Iron Age. In the 1980s and 1990s, more systematic studies[by whom?] of the artifacts revealed a more gradual development over the period covering the 9th to 7th centuries, so that the term "Thraco-Cimmerian" is now rather used by convention and does not necessarily imply a direct connection with either the Thracians or the Cimmerians.[8] 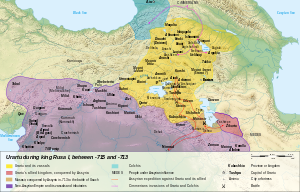 Cimmerian invasions of Colchis, Urartu and Assyria 715–713 BC

Sir Henry Layard's discoveries in the royal archives at Nineveh and Calah included Assyrian primary records of the Cimmerian invasion.[9] These records appear to place the Cimmerian homeland, Gamir, south rather than north of the Black Sea.[10][11][12]

The first record of the Cimmerians appears in Assyrian annals in the year 714 BC. These describe how a people termed the Gimirri helped the forces of Sargon II to defeat the kingdom of Urartu. Their original homeland, called Gamir or Uishdish, seems to have been located within the buffer state of Mannae. The later geographer Ptolemy placed the Cimmerian city of Gomara in this region. The Assyrians recorded the migrations of the Cimmerians, as the former people's king Sargon II was killed in battle against them while driving them from Persia in 705 BC.

The Cimmerians were subsequently recorded as having conquered Phrygia in 696–695 BC, prompting the Phrygian king Midas to take poison rather than face capture. In 679 BC, during the reign of Esarhaddon of Assyria (r. 681–669 BC), they attacked the Assyrian colonies Cilicia and Tabal under their new ruler Teushpa. Esarhaddon defeated them near Hubushna (Hupisna), and they also met defeat at the hands of his successor Ashurbanipal.

A people named Kimmerior is described Homer's Odyssey (book 11) as living beyond the Oceanus, in a land of fog and darkness, at the edge of the world and the entrance of Hades.[13]

According to Herodotus (c. 440 BC), the Cimmerians had been expelled from their homeland between the Tyras (Dniester) and Tanais (Don) rivers by the Scythians. Unreconciled to Scythian advances, to ensure burial in their ancestral homeland, the men of the Cimmerian royal family divided into groups and fought each other to the death. The Cimmerian commoners buried the bodies along the river Tyras and fled across the Caucasus and into Anatolia.[14] Herodotus also names a number of Cimmerian kings, including Tugdamme (Lygdamis in Greek; mid-7th century BC), and Sandakhshatra (late-7th century).

In 654 BC or 652 BC – the exact date is unclear – the Cimmerians attacked the kingdom of Lydia, killing the Lydian king Gyges and causing great destruction to the Lydian capital of Sardis. They returned ten years later during the reign of Gyges' son Ardys II; this time they captured the city, with the exception of the citadel. The fall of Sardis was a major shock to the powers of the region; the Greek poets Callinus and Archilochus recorded the fear that it inspired in the Greek colonies of Ionia, some of which were attacked by Cimmerian and Treres raiders.[citation needed]

The Cimmerian occupation of Lydia was brief, however, possibly due to an outbreak of plague. They were beaten back by Alyattes II of Lydia.[15] This defeat marked the effective end of Cimmerian power.

The term Gimirri was used about a century later in the Behistun inscription (c. 515 BC) as an Assyro-Babylonian equivalent of Persian Saka (Scythians). Otherwise, Cimmerians disappeared from the historical record.

In sources beginning with the Royal Frankish Annals, the Merovingian kings of the Franks traditionally traced their lineage through a pre-Frankish tribe called the Sicambri (or Sugambri), mythologized as a group of "Cimmerians" from the mouth of the Danube river, but who instead came from Gelderland in modern Netherlands and are named for the Sieg river.[16]

Early modern historians asserted Cimmerian descent for the Celts or the Germans, arguing from the similarity of Cimmerii to Cimbri or Cymry. The etymology of Cymro "Welshman" (plural: Cymry), connected to the Cimmerians by 17th-century Celticists, is now accepted by Celtic linguists as being derived from a Brythonic word *kom-brogos, meaning "compatriots".[17] The Cambridge Ancient History classifies the Maeotians as either a people of Cimmerian ancestry or as Caucasian aboriginals under Iranian overlordship.[18]

The Biblical name "Gomer" has been linked by some to the Cimmerians.[19]

According to Georgian national historiography, the Cimmerians, in Georgian known as Gimirri, played an influential role in the development of the Colchian and Iberian cultures.[20] The modern Georgian word for "hero", გმირი gmiri, is said to derive from their name.[citation needed]

It has been speculated[by whom?] that the Cimmerians finally settled in Cappadocia, known in Armenian as Գամիրք, Gamir-kʿ (the same name as the original Cimmerian homeland in Mannae).[citation needed]

It has also been speculated that the modern Armenian city of Gyumri (Arm.: Գյումրի [ˈgjumɾi]), founded as Kumayri (Arm.: Կումայրի), derived its name from the Cimmerians who conquered the region and founded a settlement there.[21]

Only a few personal names in the Cimmerian language have survived in Assyrian inscriptions:

Some researchers have attempted to trace various place names to Cimmerian origins. It has been suggested that Cimmerium gave rise to the Turkic toponym Qırım (which in turn gave rise to the name "Crimea").[23]

Based on ancient Greek historical sources, a Thracian[24][25] or a Celtic[26] association is sometimes assumed. According to Carl Ferdinand Friedrich Lehmann-Haupt, the language of the Cimmerians could have been a "missing link" between Thracian and Iranian.