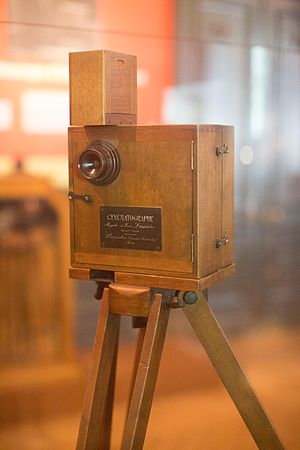 A cinematograph is a motion picture film camera, which also serves as a film projector and printer. It was invented in the 1890s.[notes 1]

The device was first invented and patented as the "Cinématographe Léon Bouly" by French inventor Léon Bouly on February 12, 1892. Bouly coined the term “cinematograph”, from the Greek for “writing in movement”.[1] Due to a lack of money, Bouly was unable to develop his ideas properly and maintain his patent fees, so he sold his rights to the device and its name to the Lumière Brothers.[2] In 1895, they applied the name to a device that was largely their own creation.

They made their first film, Sortie de l'usine Lumière de Lyon, that same year. The film was publicly screened at L'Eden, the world's first and oldest cinéma, located in La Ciotat in southeastern France, on September 28, 1895. The first commercial, public screening of cinematographic films happened in Paris on 28 December 1895 and was organised by the Lumière brothers.[3] The cinematograph was also exhibited at the Paris Exposition of 1900. At the Exposition, films made by the Lumière Brothers were projected onto a large screen measuring 16 by 21 meters (approximately 52.5 x 69 feet).[4] 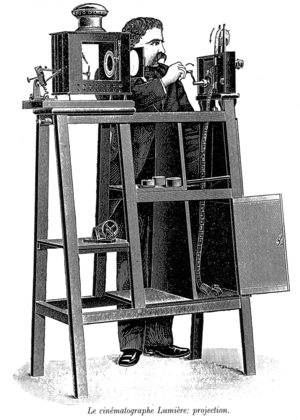 The cinématographe Lumière in projection mode 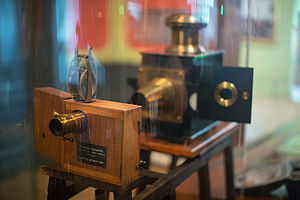 The cinématographe Lumière at Institut Lumière

Louis Lumière worked with his brother Auguste to create a motion-picture camera superior to Thomas Edison's kinetograph, which did not have a projector. The Lumières endeavored to correct the flaws they perceived in the kinetograph and the kinetoscope, to develop a machine with both sharper images and better illumination. The Cinématographe weighed only 16 lbs., which allowed for ease of transportation and placement. As well, the Cinématographe was manually operated by a hand-crank, as opposed to Edison's electrically powered camera, which was not readily portable. Furthermore, while only one person at a time could use Edison's kinetoscope for viewing - through an eyepiece, peep show style - the Cinématographe could project an image onto a screen so a large audience of people could view images simultaneously.[9]

The Cinématographe produced a sharper projected image than had been seen before due to its design, in which a kind of fork held frame behind the lens in place using the perforations in the sides of the film strip.

In 1897, the Lumières further added to their invention by using a glass flask of water as the condenser to concentrate the light onto the film frame and to absorb heat. The flask also acted as a safety feature, as the light would no longer focus on the flammable film if the glass were to break due to overheating or accident.[4]

The cinematograph became a popular attraction for people all over the world. The Lumière Brothers took their machine as far as China and India[9] and it was enjoyed by people of all classes and social standings. The cinematograph was used to show films in nickelodeons, where even the poorest classes could pay the entry fee. It was exhibited at fairs and used as entertainment in vaudeville houses in both Europe and the United States. While vaudeville is typically associated with the middle class, the machine also found its way into more sophisticated venues, where it appealed to the artistic tastes of high society.[1]

The Lumières held their first private screening of projected motion pictures on March 22, 1895. Their first public screening of films at which admission was charged was held on December 28, 1895, at Salon Indien du Grand Café in Paris. This history-making presentation featured ten short films, including their first film, Sortie des Usines Lumière à Lyon (Workers Leaving the Lumière Factory in Lyon).[6] Each film is 17 meters long, which, when hand cranked through a projector, runs approximately 50 seconds.