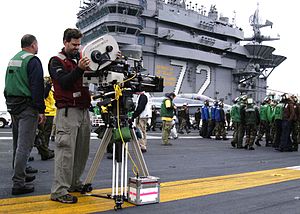 A camera crew sets up for scenes to be filmed on the flight deck for the motion picture Stealth with the crew of the Nimitz-class aircraft carrier USS Abraham Lincoln (CVN 72).

A cinematographer or director of photography (sometimes shortened to DP or DOP) is the chief over the camera crews working on a film, television production or other live action piece and is responsible for achieving artistic and technical decisions related to the image. The study and practice of this field is referred to as cinematography. Some filmmakers say that the cinematographer is just the chief over the camera and lighting, and the Director of Photography is the chief over all the photography components of film, including framing, costumes, makeup, and lighting, as well as the assistant of the post producer for color correction and grading. 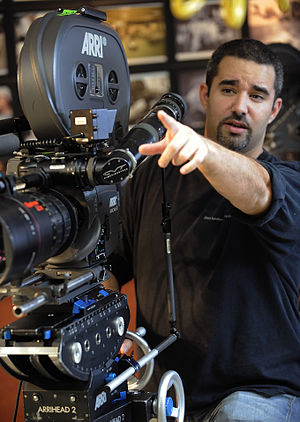 A cinematographer on set

In the infancy of motion pictures, the cinematographer was usually also the director and the person physically handling the camera. As the art form and technology evolved, a separation between director and camera operator began to emerge. With the advent of artificial lighting and faster (more light sensitive) film stocks, in addition to technological advancements in optics, the technical aspects of cinematography necessitated a specialist in that area.

Cinematography was key during the silent movie era; with no sound apart from background music and no dialogue, the films depended on lighting, acting, and set.

In 1919 Hollywood, the then-new motion picture capital of the world, one of the first (and still existing) trade societies was formed: the American Society of Cinematographers (ASC), which stood to recognize the cinematographer's contribution to the art and science of motion picture making. Similar trade associations have been established in other countries too.

There are a number of national associations of cinematographers which represent members (irrespective of their official titles) and which are dedicated to the advancement of cinematography. These include:

The A.S.C. defines cinematography as:

A creative and interpretive process that culminates in the authorship of an original work of art rather than the simple recording of a physical event. Cinematography is not a subcategory of photography. Rather, photography is but one craft that the cinematographer uses in addition to other physical, organizational, managerial, interpretive and image-manipulating techniques to effect one coherent process.[1]