A circuit (Chinese: 道; pinyin: Dào; Japanese: dō) was a historical political division of China, and is a term for an administrative unit still used in Japan. In Korea, the same word 道 (도; do) is translated as "province". 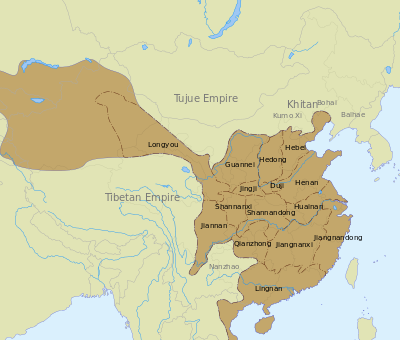 The Tang dynasty territory and inspection circuits (道 dào) in 742, according to the Cambridge History of China.

See also: History of the political divisions of China

Circuits originated in China during the Han dynasty, and were used as a lower tier administrative division, comparable to the county (縣, also translated as "districts"), but only to be used in areas in the fringes of the Empire, that were either primarily inhabited by non-Han Chinese peoples, or too geographically isolated from the rest of the Han centers of power. The system fell into disuse after the collapse of the Western Jin dynasty.[citation needed]

The administrative division was revived in 627 when Tang Emperor Taizong made it the highest level administrative division, and subdivided China into ten circuits. These were originally meant to be purely geographic and not administrative. Emperor Xuanzong added a further five and slowly, the circuits strengthened their own power, until they became powerful regional forces that tore the country apart during the Five Dynasties and Ten Kingdoms period. During the Later Jin and Song dynasties, circuits were renamed from dao to lu (路), both of which literally mean "road" or "path". Dao were revived during the Yuan dynasty.[citation needed]

Circuits were demoted to the second-level after the Yuan dynasty established provinces at the very top, and remained there for the next several centuries.[citation needed]

During the Republic of China era, circuits still existed as high-level, though not top-level, administrative divisions such as Qiongya Circuit (now Hainan province). In 1928, all circuits were replaced with committees or simply abandoned.[citation needed]

During the Asuka period (AD 538–710), Japan was organized into five provinces and seven circuits, known as the Gokishichidō (5 ki 7 dō), as part of a legal and governmental system borrowed from the Chinese.[1] Though these units did not survive as administrative structures beyond the Muromachi period (1336–1573), they did remain important geographical entities up until the 19th century. The seven circuits spread over the islands of Honshū, Shikoku, and Kyūshū:

In the mid-19th century, the northern island of Ezo was settled, and renamed Hokkaidō (北海道?, "North Sea Circuit"). It is currently the only prefecture of Japan named with the dō (circuit) suffix.