The Cisco Unified Computing System (UCS) is an (x86) architecture data center server platform composed of computing hardware, virtualization support, switching fabric, and management software introduced in 2009.[1] The idea behind the system is to reduce total cost of ownership and improve scalability by integrating the different components into a cohesive platform that can be managed as a single unit. Just-In-Time deployment of resources and 1:N redundancy can be configured with UCS systems.[2] 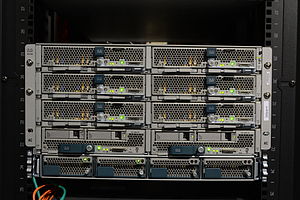 The computing component of the UCS is available in two versions: the B-Series (a powered chassis and full and/or half slot blade servers), and the C-series for 19-inch racks (that can be used with fabric interconnects). The compute hardware managed by the UCS Manager software on the fabric Interconnects can be B-Series (blades), C-Series (rackmount) or a combination of the two. Both form factors use standard components, including Intel processors and DIMM memory. The servers are marketed with converged network adapter and port virtualization. Around 2010, an extended memory technology expanded the number of memory sockets that can be connected to a single memory channel in some models.[3][4]

Cisco UCS supports several hypervisors including VMware ESX, ESXi, Microsoft Hyper-V, Citrix XenServer and others. VMware Virtualization is provided through a partnership with VMware and uses a version of that company's ESXi. Unlike the VMware Workstation software, ESX and ESXi run directly on the system hardware without the need for any other software (called Bare Metal), and provide the necessary hypervisor functions to host several guest operating systems (such as Windows or Linux) on the physical server. Guest operating systems are limited to 255 GB of vRAM and 8 virtual processors in vSphere 4.x, upgraded to 1 TB of vRAM and 32 vCPUs in vSphere 5.0. Additionally, the Cisco UCS Virtual Interface Cards incorporate VM-FEX technology that gives virtual machines direct access to the hardware for improved performance and network visibility.

The Cisco Fabric Interconnects (or "FI") provide network connectivity for the chassis, blade servers and rack servers connected to it through different speeds of ethernet and Fiber Channel over Ethernet (FCoE). The fabric interconnects are derived from the Nexus 5000 series switch and run NX-OS as well as the UCS Manager software. The FCoE component is necessary for connection to SAN storage, since the UCS system blade servers have very little local storage capacity. Cisco has produced the following series:

Management of the system devices is handled by the Cisco UCS Manager software embedded into the Fabric Interconnect, which is accessed by the administrator through a common browser such as Internet Explorer or Firefox, or a Command line interface like Windows PowerShell or programmatically through an API. Virtual machines can be moved from one physical chassis to another, applications may be moved between virtual machines, and management may even be conducted remotely from an iPhone using SiMU - Simple iPhone Management of UCS. In addition to the embedded software, administrators may also manage the system from VMware's vSphere. The Cisco Integrated Management Controller (CIMC) is also used to configure and manage C-Series servers not connected to a UCS environment. The CIMC can also be used to manage B-Series blades in addition to the UCS Manager application if configured.

In November 2012, Cisco announced the addition of UCS Central which extends management across multiple domains of UCS and as many as 10,000 servers. UCS Central extends the same model based, open API approach established with UCS Manager.

A key benefit is the concept of Stateless Computing. Each compute node has no set configuration. MAC addresses, UUIDs, firmware and BIOS settings for example, are all configured on the UCS manager in a Service Profile and applied to the servers. This allows for consistent configuration and ease of re-purposing. A new profile can be applied within a matter of minutes.