From Infogalactic: the planetary knowledge core
Jump to: navigation, search
This article is about City car. For the urban all-electric car, see CityCar.
Not to be confused with town car. 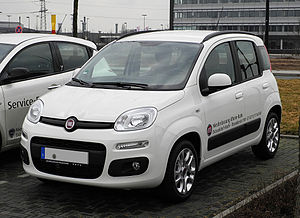 A city car (also known as urban car or mini) is a small car[2] intended primarily for urban areas[3] and conurbations.

The term is used along with other terms for small cars including subcompact in North America. The Euro NCAP calls all small cars superminis.[4] The European Commission refers to A-segment (Utility/city class: entry level small passenger car).[5]

A number of small and light cars were sold before the fifties, but not specifically known as city cars. These include the 1920s Austin 7, 1930s Fiat 500 "Topolino" and the 1940s Crosley. After the Second World War, a number of manufacturers introduced microcars, the precursors to the modern city car.[citation needed] These included the Bond Minicar and AC Petite in Britain; the Iso Isetta in Italy in 1953; the Fulda, Messerschmitt Kabinenroller, and Brütsh in Germany in 1954 (all two-seaters with a Fulda and Sachs two-stroke engine; the Goggomobil Isard (a 2+2, rather than a true four-seater); and the Gutbrod Superior.[6] There was also the Dornier-designed Zündapp Janus,[6] which placed passengers back to back, and the Riley Reliant.[7] 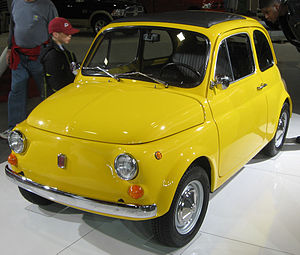 As the European economy improved, all but the Riley disappeared.[7] Fiat launched the new 500 in 1957 and in 1959, BMC would introduce its well known city car, the Mini. DAF joined Italian motoring magazine Quattroruote and Turin coachbuilder OSI to produce the DAF City, which used Daffodil mechanicals.[7] There were other new projects from 1969 through 1972.[8] In 1972, Daihatsu proffered an electric model, while Toyota showed the Town Spider, with a choice of petrol or electric power,[9] and General Motors displayed three two-seaters, one electric, one gasoline, and one (unfortunately for GM, not a precursor) hybrid. The GM products were capable of only 0–30 mph (0–48 km/h) in 15 seconds and 30–45 mph (48–72 km/h) maximum, not good enough for normal city driving, nor could they meet the safety regulations which would be introduced in 1974.[10]

While many of these cars can be considered city cars today, these cars have been replaced by larger cars with each passing generation. Exceptions are the smaller Fiats, especially the 1957 Fiat 500 and 126. They were in the region of 3.0 metres (9 ft 10 in) in length, but had seating for four people, putting them outside the microcar category. In the 1970s the Citroën LNA and related three-door Peugeot 104 offered compact city sized cars of around 3.3 m, and the Fiat Panda followed in 1980.

In Japan, regulations defining kei cars were established on 8 July 1949. Production of compliant vehicles started around 1955–1958 by Daihatsu, Mitsubishi, Subaru, and Suzuki. 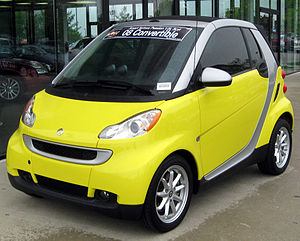 In the late 1980s, superminis had physically grown so much that many buyers wanted even smaller four-seat cars. In Japan, buyers had a wide selection to choose from in passenger cars, microvan and kei trucks, such as the Honda Today and the Honda Acty, Subaru Sambar and Subaru Vivio, Daihatsu Atrai and Daihatsu Mira, Mitsubishi Minica and Mitsubishi Minicab, and the Suzuki Fronte and Suzuki Wagon R. In Europe a number of small cars were launched, including the Lancia Y10 (3,390 millimetres (11 ft 1 in) long) in 1985 and the Renault Twingo in 1993, which featured a MPV-like design and interior room, despite its size and height 3,430 millimetres (11 ft 3 in) long and 1,420 millimetres (4 ft 8 in) tall. Combined with an original exterior and interior design, it quickly became a best-seller, although it was not officially imported to right-hand drive markets including the United Kingdom. However, the Fiat Cinquecento, launched towards the end of 1991, was made for right-hand drive markets, and was hugely popular.

In 1996, the Ford Ka was presented with its radical New Edge design. Its egg-shaped body did not leave much room in the rear seats, but many customers did not need them and preferred the Ka over more conservative designs. It was especially popular with British buyers.

During the second half of the 1990s, South Korean brands Daewoo and Hyundai introduced their city car entries, both for the Asian and European markets. The Hyundai Atos, launched in 1997, was 3,500 millimetres (11 ft 6 in) long and 1,600 millimetres (5 ft 3 in) high, which was much taller than any European models (usually under 1,450 millimetres (4 ft 9 in)) and provided considerable interior space. Its boxy shape provoked mixed reactions. The Daewoo Matiz followed in 1998 with a Giorgetto Giugiaro design and a moderate height (1,500 millimetres (4 ft 11 in)). These Korean city cars were much cheaper than most of the European models, especially the Opel/Vauxhall Agila (2000), a badge engineered Suzuki Wagon R, Volkswagen Lupo (1999) and the two-seater Smart Fortwo (1998). By the year 2000, city cars had increased massively in popularity with buyers in the space of a decade. 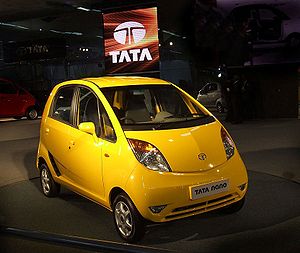 Tata Nano, the world's cheapest car.[11] India is the world's number one producer of basic cars.[12] 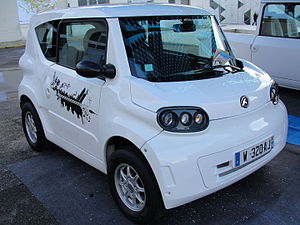 In addition, since the 2000s there has been a return of smaller city cars with lengths well under 3,200 mm such as the Tata Nano and Toyota iQ. Slightly larger, but still around 3,300 mm city cars released in the 2010s include the electric Bolloré Bluecar and Mitsubishi i-MiEV, and traditionally powered Citroën C1 and related Toyota Aygo.[14]