Civil aviation is one of two major categories of flying, representing all non-military aviation, both private and commercial. Most of the countries in the world are members of the International Civil Aviation Organization (ICAO) and work together to establish common standards and recommended practices for civil aviation through that agency.

Although scheduled air transport is the larger operation in terms of passenger numbers, GA is larger in the number of flights (and flight hours, in the U.S.[1]) In the U.S., GA carries 166 million passengers each year,[2] more than any individual airline, though less than all the airlines combined. Since 2004, the US Airlines combined have carried over 600 million passengers each year, and in 2014, they carried a combined 662,819,232 passengers.[3]

Some countries also make a regulatory distinction based on whether aircraft are flown for hire like: 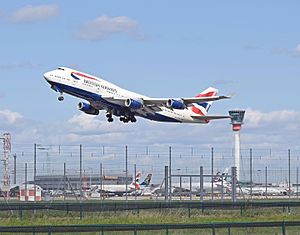 A British Airways Boeing 747-400 departs London Heathrow Airport. This is an example of a commercial aviation service.

All scheduled air transport is commercial, but general aviation can be either commercial or private. Normally, the pilot, aircraft, and operator must all be authorized to perform commercial operations through separate commercial licensing, registration, and operation certificates.

After World War II, commercial aviation grew rapidly, using mostly ex-military aircraft to transport people and cargo. This growth was accelerated by the glut of heavy and super-heavy bomber airframes like the B-29 and Lancaster that could be converted into commercial aircraft. The DC-3 also made for easier and longer commercial flights. The first commercial jet airliner to fly was the British de Havilland Comet. By 1952, the British state airline BOAC had introduced the Comet into scheduled service. While a technical achievement, the plane suffered a series of highly public failures, as the shape of the windows led to cracks due to metal fatigue. The fatigue was caused by cycles of pressurization and depressurization of the cabin, and eventually led to catastrophic failure of the plane's fuselage. By the time the problems were overcome, other jet airliner designs had already taken to the skies.

The Convention on International Civil Aviation (the "Chicago Convention") was originally established in 1944; it states that signatories should collectively work to harmonize and standardize the use of airspace for safety, efficiency and regularity of air transport.[4] Each signatory country, of which there are at least 188, has a civil aviation authority (such as the FAA in the United States) to oversee the following areas of civil aviation:[citation needed]