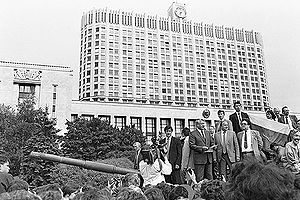 Moscow, 19 August 1991: Boris Yeltsin, President of the Russian Soviet Federative Socialist Republic, standing on top of a tank in front of the building of the RSFSR’s Council of Ministers and reading a statement urging people to resist the attempted coup d’état. Two days later, following extensive civil resistance, the coup, which had been aimed at restoring the old-style communist system, collapsed. The Soviet Union itself dissolved in December 1991.

Civil resistance is political action that relies on the use of nonviolent resistance by civil groups to challenge a particular power, force, policy or regime.[1] Civil resistance operates through appeals to the adversary, pressure and coercion: it can involve systematic attempts to undermine the adversary's sources of power, both domestic and international. Forms of action have included demonstrations, vigils and petitions; strikes, go-slows, boycotts and emigration movements; and sit-ins, occupations, and the creation of parallel institutions of government. Civil resistance movements' motivations for avoiding violence are generally related to context, including a society's values and its experience of war and violence, rather than to any absolute ethical principle. Cases of civil resistance can be found throughout history and in many modern struggles, against both tyrannical rulers and democratically elected governments.[2] The phenomenon of civil resistance is often associated with the advancement of democracy.[3] 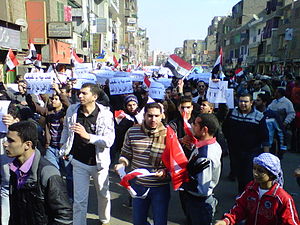 Egypt, 25 January 2011: marchers in Cairo with ‘OUT’ signs on the 'Day of Anger' against President Mubarak. On 11 February he left office.

Numerous other campaigns, both successful and unsuccessful, could be included in a longer listing. In 1967 Gene Sharp produced a list of 84 cases.[5] He has followed this with further surveys.[6] In 2013 Maciej Bartkowski authored a long list of cases in the past 200 years, arranged alphabetically by country.[7]

It is not easy to devise a method of proving the relative success of different methods of struggle. Often there are problems in identifying a given campaign as successful or otherwise. In 2008 Maria J. Stephan and Erica Chenoweth produced the most thorough and detailed analysis of the rate of success of civil resistance campaigns, as compared to violent resistance campaigns. After looking at over 300 cases of both types of campaign, from 1900 to 2006, they concluded that "nonviolent resistance methods are likely to be more successful than violent methods in achieving strategic objectives." Their article noted particularly that "resistance campaigns that compel loyalty shifts among security forces and civilian bureaucrats are likely to succeed."[8] The evidence of several of the 2011 uprisings, on the other hand, appears to provide contrasting pathways by which this logic may fail to materialise, with splits in the armed forces contributing towards civil war in Libya and Syria, and a shift in armed forces loyalty in Egypt failing to contribute towards enduring democratic reform.[9] Criticisms of the central thesis of Why Civil Resistance Works have included: 1. Forming judgements about whether a campaign is a success or failure is inherently difficult: the answer may depend on the time-frame used, and on necessarily subjective judgments about what constitutes success. Some of the authors' decisions on this are debatable. Similar difficulties arise in deciding whether a campaign is violent or non-violent, when on the ground both strategies may co-exist in several ways.[10] 2. Regimes transitioning from autocracy to democracy tend to be highly unstable, so an initial success for a movement may be followed by a more general failure.[11] 3. Perhaps, more generally, sufficient account is not taken of the possibility that violence often takes place in circumstances that were already violent and chaotic, stacking the odds against any successful outcome for violence.[12]

Reasons for choosing to use civil resistance 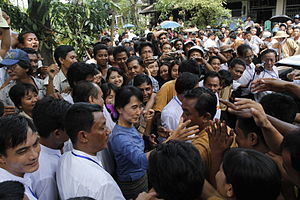 Some leaders of civil resistance struggles have urged the use of non-violent methods for primarily ethical reasons, while others have emphasized practical considerations. Some have indicated that both of these types of factor have to be taken into account – and that they necessarily overlap.

In his chapter on "Pilgrimage to Nonviolence" Martin Luther King gave a notably multi-faceted account of the various considerations, experiences and influences that constituted his "intellectual odyssey to nonviolence". By 1954 this had led to the intellectual conviction that "nonviolent resistance was one of the most potent weapons available to oppressed people in their quest for social justice."[13]

In one of her BBC Reith Lectures, first broadcast in July 2011, Aung San Suu Kyi, the Burmese pro-democracy campaigner, stated: "Gandhi’s teachings on non-violent civil resistance and the way in which he had put his theories into practice have become part of the working manual of those who would change authoritarian administrations through peaceful means. I was attracted to the way of non-violence, but not on moral grounds, as some believe. Only on practical political grounds."[14]

Relationship to other forms of power

The experience of civil resistance suggests that it can at least partially replace other forms of power. Some have seen civil resistance as offering, potentially, a complete alternative to power politics. The core vision is of non-violent methods replacing armed force in many or all of its forms.[15]

Several writers, while sharing the vision of civil resistance as progressively overcoming the use of force, have warned against a narrowly instrumental view of non-violent action. For example, Joan V. Bondurant, a specialist on the Gandhian philosophy of conflict, indicated concern about "the symbolic violence of those who engage in conflict with techniques which they, at least, perceive to be nonviolent." She saw Gandhian satyagraha as a form of "creative conflict" and as "contrasted both to violence and to methods not violent or just short of violence".[16]

It is generally difficult in practice to separate out entirely the use of civil resistance and power-political considerations of various kinds. One frequently-encountered aspect of this problem is that regimes facing opposition taking the form of civil resistance often launch verbal attacks on the opposition in terms designed to suggest that civil resistance is simply a front for more sinister forces. It has sometimes been attacked as being planned and directed from abroad, and as intimately connected to terrorism, imperialism, communism etc. A classic case was the Soviet accusation that the 1968 Prague Spring, and the civil resistance after the Soviet-led invasion of August 1968, were the result of Western machinations.[17] Similarly, President Bashar al-Assad of Syria, in March 2011, accused “enemies” of using “very sophisticated tools” to undermine Syria’s stability; and President Vladimir Putin of Russia, in speeches in 2014, described events in Ukraine and the Arab countries as foreign-infuenced.[18] Such accusations of sinister power-political involvement are often presented without convincing evidence.

Proposals for defence by civil resistance

The promise of civil resistance as a means of opposing oppressive rule has led to many proposals that countries might rely, in whole or in part, on civil resistance as a means of defence against external attack (for example, invasion) and internal usurpation (for example, coup d'état). Preparations for such resistance are sometimes seen as potentially helping to deter such threats in the first place. Various terms have been used to describe either the policy of relying on such non-military action by a society or social group, or the general phenomenon of sustained country-wide campaigns against outside attack or dictatorial rule. These terms - all near-synonyms - include "defence by civil resistance", "non-violent defence", "civilian defence", "civilian-based defence", and "social defence". For further information and references to some relevant literature, see social defence. 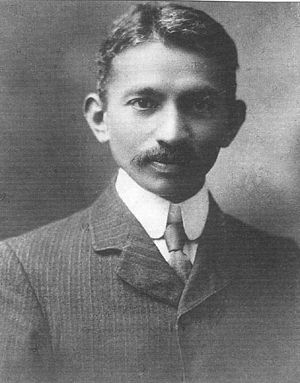 Gandhi in South Africa in about 1906-1909. Referring to his years there, he later wrote: "... I found that even civil disobedience failed to convey the full meaning of the struggle. I therefore adopted the phrase civil resistance."

The term is not new. Gandhi used it in many of his writings.[37] In 1935 he wrote: "... I found that even civil disobedience failed to convey the full meaning of the struggle. I therefore adopted the phrase civil resistance."[38] It is a near-synonym for nonviolent resistance, civil disobedience, people power and satyagraha. While each of these terms has its uses and connotations, "civil resistance" is one appropriate term to use in cases where the resistance has a civic quality, relating to a society as a whole; where the action involved is not necessarily disobedience, but instead involves supporting the norms of a society against usurpers; where the decision not to use violent methods is not based on a general philosophy of nonviolence, but on a wide range of prudential, ethical and legal considerations; and where the technical and communications infrastructure of modern civil societies provides a means of organizing resistance.[39] Because of such considerations, the term has been used in this century in many analyses in academic journals.[40]

There have been concerns that the term “civil resistance” might on occasion be misused, or at least stretched in a highly controversial way, to encompass acts of violence. Thus, arising from experience within the anti-globalization movement, one participant-observer has seen “new forms of civil resistance” as being associated with a problematic departure from a previously more widely shared commitment to maintaining non-violent discipline.[41] Because of these concerns, those who have used the term "civil resistance" have tended to emphasise its non-violent character, and to use it in addition to – and not in substitution of – such terms as "non-violent resistance".

Other works related to the topic