From Infogalactic: the planetary knowledge core
Jump to: navigation, search
For other uses, see Civilian (disambiguation).

In general, a civilian is "a person who is not a member of the military or of a police or firefighting force", as defined by the Merriam Webster's Dictionary.[1] The term also includes chaplains and medical personnel who are not part of the organizations mentioned in the preceding sentence, as well as those who are not perpetrators, in order to distinguish between those who are law-abiding people and those who are dedicated criminals. From the U.S. Department of Defense perspective, Chapter 18 of Title 10 United States Code refers to law enforcement officers as civilians, since they are employees rather than enlisted personnel, and also in order to distinguish itself from military police.[2]

Under the laws of war (also known as international humanitarian law), a civilian is one not being a member of the armed services and does not take a direct part of hostilities in times of armed conflict. The term "civilian" is slightly different from a non-combatant under the laws of war, because some non-combatants are not civilians (for example, military chaplains attached to the belligerent armed forces or neutral military personnel). Under international law, civilians in the territories of a Party to an armed conflict are entitled to certain privileges under the customary laws of war and international treaties such as the Fourth Geneva Convention. The privileges that they enjoy under international law depends on whether the conflict is an internal one (a civil war) or an international one.

The word "civilian" goes back to the late 14th century and is from Old French civilien, "of the civil law". Civilian is believed to have been used to refer to non-combatants as early as 1829. The term "non-combatant" now refers to people in general who are not taking part of hostilities, rather than just civilians.[3]

The International Committee of the Red Cross 1958 Commentary on 1949 Geneva Convention IV Relative to the Protection of Civilian Persons in Time of War states: "Every person in enemy hands must have some status under international law: he is either a prisoner of war and, as such, covered by the Third Convention, a civilian covered by the Fourth Convention, or again, a member of the medical personnel of the armed forces who is covered by the First Convention. There is no intermediate status; nobody in enemy hands can be outside the law. We feel that this is a satisfactory solution – not only satisfying to the mind, but also, and above all, satisfactory from the humanitarian point of view."[4] The ICRC has expressed the opinion that "If civilians directly engage in hostilities, they are considered 'unlawful' or 'unprivileged' combatants or belligerents (the treaties of humanitarian law do not expressly contain these terms). They may be prosecuted under the domestic law of the detaining state for such action."[5]

According to Article 50 of the 1977 Protocol I Additional to the Geneva Conventions, "1. A civilian is any person who does not belong to one of the categories of persons referred to in Article 4A(1 ),(2),(3) and (6) of the Third Convention and in Article 43 of this Protocol. In case of doubt whether a person is a civilian, that person shall be considered to be a civilian. 2. The civilian population comprises all persons who are civilians. 3. The presence within the civilian population of individuals who do not come within the definition of civilians does not deprive the population of its civilian character." The definition is negative and defines civilians as persons who do not belong to definite categories. The categories of persons mentioned in Article 4A(1 ),(2),(3) and (6) of the Third Convention and in Article 43 of the Protocol I are combatants. Therefore, the Commentary to the Protocol pointed that, any one who is not a member of the armed forces is a civilian. Civilians cannot take part in armed conflict. Civilians are given protection under the Geneva Conventions and Protocols thereto. Article 51 describes the protection that must be given to the civilian population and individual civilians. Chapter III of Protocol I regulates the targeting of civilian objects. Article 8(2)(b)(i) of the 1998 Rome Statute of the International Criminal Court also includes this in its list of war crimes: "Intentionally directing attacks against the civilian population as such or against individual civilians not taking part in hostilities". Not all states have ratified 1977 Protocol I or the 1998 Rome Statute, but it is an accepted principle of international humanitarian law that the direct targeting of civilians is a breach of the customary laws of war and is binding on all belligerents.

The actual position of the civilian in modern war remains problematical.[6] It is complicated by a number of phenomena, including:

Starting in the 1980s, it was often claimed that 90 percent of the victims of modern wars were civilians.[7][8][9][10] The claim was repeated on Wikipedia's Did You Know on 14 December 2010. These claims, though widely believed, are not supported by detailed examination of the evidence, particularly that relating to wars (such as those in former Yugoslavia and in Afghanistan) that are central to the claims.[11] 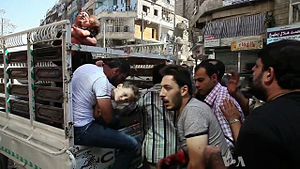 Wounded civilians arrive at a hospital in Aleppo during the Syrian civil war, October 2012

In the opening years of the twenty-first century, despite the many problems associated with it, the legal category of the civilian has been the subject of considerable attention in public discourse, in the media and at the United Nations, and in justification of certain uses of armed force to protect endangered populations. It has "lost none of its political, legal and moral salience."[12]

Although it is often assumed that civilians are essentially passive onlookers of war, sometimes they have active roles in conflicts. These may be quasi-military, as when in November 1975 the Moroccan government organized the "green march" of civilians to cross the border into the former Spanish colony of Western Sahara to claim the territory for Morocco - all at the same time as Moroccan forces entered the territory clandestinely.[13] In addition, and without necessarily calling into question their status as non-combatants, civilians sometimes take part in campaigns of nonviolent civil resistance as a means of opposing dictatorial rule or foreign occupation: sometimes such campaigns happen at the same time as armed conflicts or guerrilla insurrections, but they are usually distinct from them as regards both their organization and participation.[14]

Under their own municipal law, governments may extend the definition of who is a civilian to exclude those who work for the emergency medical services and emergency management agencies, because such personnel may from time to time need additional legal powers over and above those usually available to ordinary citizens.

Officials directly involved in the maiming of civilians are conducting offensive military operations and do not qualify as civilians.[citation needed]