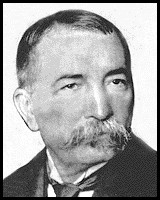 Clóvis Beviláqua (1859–1944) was a Brazilian jurist, historian and journalist born in Viçosa do Ceará (which is in Ceará, in the Northeast of Brazil, in 1859. Beviláqua was professor for civil and comparative law at Recife. As the author of the Brazilian Civil Code of 1916, whose first draft he presented in 1899, and as that code's first commentator, Beviláqua was the founding father of Brazilian civil law scholarship. He founded and occupied the 14th chair of the Brazilian Academy of Letters, from 1897 until his death in 1944. The chair's patron is Franklin Távora.