The eldest of three children, Clara Zetkin was born Clara Josephine Eissner in Wiederau, a peasant village in Saxony, now part of the municipality Königshain-Wiederau.[3] Her father, Gottfried Eissner, was a schoolmaster and church organist who was a devout Protestant, while her mother, Josephine Vitale, had French roots and came from a middle-class family from Leipzig and was highly educated.[3][4][5] Having studied to become a teacher, Zetkin developed connections with the women's movement and the labour movement in Germany from 1874. In 1878 she joined the Socialist Workers' Party (Sozialistische Arbeiterpartei, SAP). This party had been founded in 1875 by merging two previous parties: the ADAV formed by Ferdinand Lassalle and the SDAP of August Bebel and Wilhelm Liebknecht. In 1890 its name was changed to its modern version Social Democratic Party of Germany (SPD). 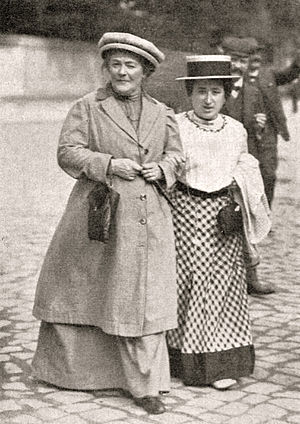 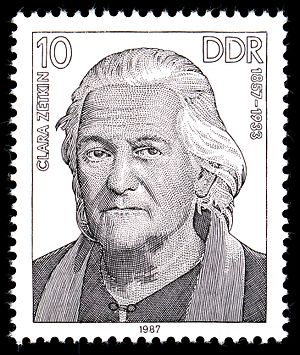 Stamp of the GDR

Banknote of the GDR

Because of the ban placed on socialist activity in Germany by Bismarck in 1878, Zetkin left for Zurich in 1882 then went into exile in Paris. During her time in Paris she played an important role in the foundation of the Socialist International socialist group.[1] She also adopted the name of her lover, the Russian-Jewish leftist Ossip Zetkin, with whom she had two sons, Kostantin (Kostja) and Maxim. Ossip Zetkin died in 1889. Later, Zetkin was married to the artist Georg Friedrich Zundel, eighteen years her junior, from 1899 to 1928.

In the SPD, Zetkin, along with Rosa Luxemburg, her close friend and confidante, was one of the main figures of the far-left wing of the party. In the debate on Revisionism at the turn of the 20th century they jointly attacked the reformist theses of Eduard Bernstein.

Zetkin was very interested in women's politics, including the fight for equal opportunities and women's suffrage. She developed the social-democratic women's movement in Germany; from 1891 to 1917 she edited the SPD women's newspaper Die Gleichheit[lower-alpha 1] (Equality). In 1907 she became the leader of the newly founded "Women's Office" at the SPD. She established the first "International Women's Day" on 19 March 1911, launching the idea of it in Copenhagen, in what later became the Ungdomshuset.

During the First World War Zetkin, along with Karl Liebknecht, Rosa Luxemburg, Luise Kähler and other influential SPD politicians, rejected the party's policy of Burgfrieden (a truce with the government, promising to refrain from any strikes during the war). Among other anti-war activities, Zetkin organised an international socialist women's anti-war conference in Berlin in 1915. Because of her anti-war opinions, she was arrested several times during the war, and in 1916 taken into "protective custody" (from which she was later released on account of illness).[1]

In 1916 Zetkin was one of the co-founders of the Spartacist League[1] and the Independent Social Democratic Party of Germany (USPD) which had split off in 1917 from its mother party, the SPD, in protest at its pro-war stance. In January 1919, after the German Revolution in November of the previous year, the KPD (Communist Party of Germany) was founded; Zetkin also joined this and represented the party from 1920 to 1933 in the Reichstag. She interviewed Lenin on "The Women's Question" in 1920.[7] 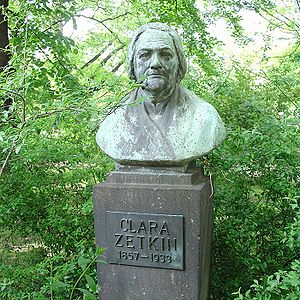 Until 1924 Zetkin was a member of the KPD's central office; from 1927 to 1929 she was a member of the party's central committee. She was also a member of the executive committee of the Communist International (Comintern) from 1921 to 1933. In 1925 she was elected president of the German left-wing solidarity organisation Rote Hilfe. In August 1932, as the chairwoman of the Reichstag by seniority, she was entitled to give the opening address, and used it to call for workers to unite in the struggle against fascism.

When Adolf Hitler and his Nazi Party took over power, the Communist Party of Germany was banned, following the Reichstag fire in 1933. Zetkin went into exile for the last time, this time to the Soviet Union. She died there, at Arkhangelskoye, near Moscow, in 1933, aged nearly 76.[1] Her ashes were placed in the Kremlin Wall Necropolis,[1] by the Moscow Kremlin Wall, near the Red Square.