Clarence Leonard "Kelly" Johnson (February 27, 1910 – December 21, 1990) was an American systems and aeronautical engineer. He is recognised for his contributions to a series of important aircraft designs, most notably the Lockheed SR-71 Blackbird. Besides the first production aircraft to exceed mach 3, he also produced the first fighter capable of mach 2, the United States' first operational jet fighter, as well as its first successful twin-engine fighter, and many other contributions to a large number of aircraft.[1] As a member and first team leader of the Lockheed Skunk Works, Johnson worked for more than four decades and is said to have been an "organizing genius".[2] He played a leading role in the design of over forty aircraft, including several honored with the prestigious Collier Trophy, acquiring a reputation as one of the most talented and prolific aircraft design engineers in the history of aviation. In 2003, as part of its commemoration of the 100th anniversary of the Wright Brothers' flight, Aviation Week & Space Technology ranked Johnson 8th on its list of the top 100 "most important, most interesting, and most influential people" in the first century of aerospace.[3] Hall Hibbard, Johnson's Lockheed boss, referring to Johnson's Swedish ancestry once remarked to Ben Rich: "That damned Swede can actually see air."[1][4]

Johnson also helped to design the Lockheed AQM-60 Kingfisher a decade before the famous SR-71. The Kingfisher was a highly successful single engine mach 4.3 capable Ramjet composed mainly of steel, which was used to test American air defenses against nuclear missiles. The information and experience Johnson gained was later used to produce the A-12 spy plane for the Central Intelligence Agency. Johnson then used the combined knowledge of the Kingfisher and A-12 to produce the SR-71 Blackbird, his most famous aircraft.[5] 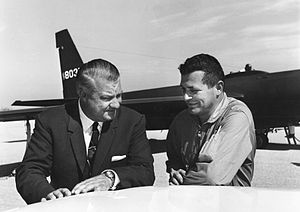 Kelly Johnson and Gary Powers in front of a U-2.

Kelly Johnson was born in the remote mining town of Ishpeming, Michigan. His parents were Swedish, from the city of Malmö, county of Scania. Kelly was ashamed of his family's poverty, and vowed to return one day in prominence.[6] Johnson was 13 years old when he won a prize for his first aircraft design. He worked his way through Flint Central High School and graduated in 1928, then went to Flint Junior College, now known as Mott Community College, and finally to the University of Michigan in Ann Arbor, where he received a Master's Degree in Aeronautical Engineering.

While attending grade school in Michigan, he was ridiculed for his name, Clarence. Some boys started calling him "Clara". One morning while waiting in line to get into a classroom, one boy started with the normal routine of calling him "Clara". Johnson tripped him so hard the boy broke a leg. The boys then decided that he was not a "Clara" after all, and started calling him "Kelly". The nickname came from the popular song at the time, "Kelly With the Green Neck Tie". Henceforth he was always known as "Kelly" Johnson.[7][citation needed]

In 1937, Johnson married Althea Louise Young, who worked in Lockheed's accounting department; she died in December 1969. In May 1971, he married his secretary Mary Ellen Elberta Meade of New York; she died after a long illness on October 13, 1980, aged 38. He married Meade's friend Nancy Powers Horrigan in November 1980.[citation needed]

His autobiography, titled Kelly: More Than My Share of it All, was published in 1985.[8]

Johnson died at the age of 80 at St. Joseph Medical Center in Burbank after an undisclosed illness that lasted for several years.[9] He is buried at Forest Lawn Cemetery, Los Angeles, California.

File:Kelly-Johnson Electra.jpg
Kelly Johnson participated in the design of the Lockheed Model 10 Electra, testing a model with a single vertical stabilizer in the wind tunnel of the University of Michigan.

At the University of Michigan, Johnson conducted wind tunnel tests of Lockheed's proposed twin-engined Lockheed Model 10 Electra airliner. He found that the aircraft did not have adequate directional stability, but his professor felt it did and reported so to Lockheed. Upon completing his master's degree in 1933, Johnson joined the Lockheed Company as a tool designer on a salary of $83 a month. Shortly after starting at Lockheed, Johnson convinced Hall Hibbard, the chief engineer, that the Lockheed Model 10 Electra was unstable. Hibbard sent Johnson back to Michigan to conduct more tests. Johnson eventually made multiple changes to the wind tunnel model, including adding an "H" tail, to address the problem. Lockheed accepted Johnson's suggestions and the Model 10 went on to be a success. This brought Johnson to the attention of Lockheed management, and he was promoted to aeronautical engineer.[10]

After assignments as flight test engineer, stress analyst, aerodynamicist, and weight engineer, he became chief research engineer in 1938. In 1952, he was appointed chief engineer of Lockheed's Burbank, California plant, which later became the Lockheed-California Company. In 1956 he became Vice President of Research and Development there. 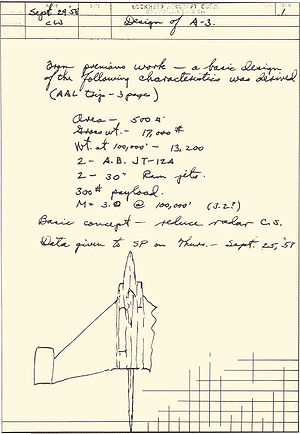 Design of Lockheed A-3 (Mach 3 Ramjet), sketch from Johnson's notebook

Johnson became Vice President of Advanced Development Projects (ADP) in 1958. The first ADP offices were nearly uninhabitable; the stench from a nearby plastic factory was so vile that Irv Culver, one of the engineers, began answering the intra-Lockheed "house" phone "Skonk Works!"[11] In Al Capp's comic strip Li'l Abner, Big Barnsmell's Skonk Works — spelled with an "o" — was where Kickapoo Joy Juice was brewed. When the name "leaked" out, Lockheed ordered it changed to "Skunk Works" to avoid potential legal trouble over use of a copyrighted term. The term rapidly circulated throughout the aerospace community, and became a common nickname for research and development offices; however, reference to "The Skunk Works" means the Lockheed ADP department. Here, the F-104 Starfighter and the secret reconnaissance planes U-2 and SR-71 Blackbird were developed.

Johnson led or contributed to the development of a number of aircraft. A few examples illustrate the influence of his work. In the late 1930s, Johnson helped lead the team that developed the P-38 Lightning.[12] Eventually, almost 10,000 of these fighters were built.[13][14] They played a significant role in World War II. In 1943, responding to United States Army Air Forces' concerns about Nazi Germany's development of high performance jet fighters, Johnson proposed to develop a jet airplane in six months. The result, the P-80 Shooting Star, was completed on time and became America's first operational jet fighter. The need to find space to develop the P-80 also led to the creation of the facility that would later be called the Skunk Works.[15] Johnson also led the development of the SR-71 Blackbird family of aircraft. Through a number of significant innovations, Johnson's team was able to create an aircraft that flew so high and fast that it could neither be intercepted nor shot down. No other jet airplane has matched the Blackbird's performance.[16]

In 1955, at the request of the Central Intelligence Agency, Johnson initiated construction of the airbase at Groom Lake, Nevada, later known as Area 51. This project provided a secret location for flight testing the Lockheed U-2.[17]

He served on Lockheed's board of directors from 1964 to 1980, becoming a senior vice president in 1969. He officially retired from Lockheed in 1975 and was succeeded by Ben Rich, but continued as a consultant at the Skunk Works. In June 1983, the Lockheed Rye Canyon Research and Development Center in Santa Clarita was renamed Kelly Johnson Research and Development Center, Lockheed-California Company, in honor of Johnson's 50 years of service to the company.

A number of factors contributed to Johnson's extraordinary career. He was a very talented designer and engineer. For instance, he could quickly and accurately estimate design characteristics such as mass, characteristics that usually were determined through long calculations.[18] He was also ambitious and an excellent salesman, aggressively promoting ideas while also earning others' trust.[19] In addition, he created teams and a work environment where creativity and productivity could flourish.[20] 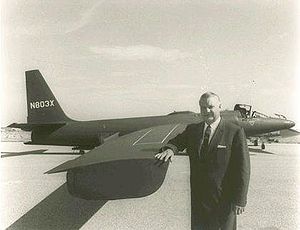 Kelly Johnson with an early variant of the U-2.

While at Lockheed, Johnson designed the P-38 Lightning fighter, made Fowler flaps work on the Model 14 Super Electra, and played a major role in converting the type into the Royal Air Force's Lockheed Hudson on short notice in 1938. He worked on the development of the Constellation for Howard Hughes' TWA airline.

Johnson contributed to the design of the following Lockheed aircraft:

Johnson's famed "down-to-brass-tacks" management style was summed up by his motto, "Be quick, be quiet, and be on time." He ran Skunk Works by "Kelly's 14 Rules":[21]

Note that Kelly had a 15th rule that he passed on by word of mouth. According to the book "Skunk Works" the 15th rule is: "Starve before doing business with the damned Navy. They don't know what the hell they want and will drive you up a wall before they break either your heart or a more exposed part of your anatomy."[22]