Classical Arabic (CA), also known as Quranic Arabic or occasionally Mudari Arabic, is the form of the Arabic language used in literary texts from Umayyad and Abbasid times (7th to 9th centuries). It is based on the medieval dialects of Arab tribes. Modern Standard Arabic (MSA) is the direct descendant used today throughout the Arab world in writing and in formal speaking, for example, prepared speeches, some radio broadcasts, and non-entertainment content.[1] While the lexis and stylistics of Modern Standard Arabic are different from Classical Arabic, the morphology and syntax have remained basically unchanged (though MSA uses a subset of the syntactic structures available in CA).[2] The vernacular dialects, however, have changed more dramatically.[3] In the Arab world, little distinction is made between CA and MSA, and both are normally called al-fuṣḥá (الفصحى‎) in Arabic, meaning 'the most eloquent (Arabic language)'. Classical Arabic's only difference toward Arabic is grammar, but in vocabulary, spelling, accent, and pronunciation, there is no difference.

Because the Quran is in Classical Arabic, the language is considered by most Muslims to be sacred.[4]

Classical Arabic has its origins in the central and northern parts of the Arabian Peninsula, and is distinct from the Old South Arabian languages that were spoken in the southern parts of the peninsula, modern day Yemen.[5] Classical Arabic co-existed with the Old North Arabian languages. In the 5th century BC, Herodotus (Histories I,131; III,8) quotes the epithet of a goddess in its preclassical Arabic form as Alilat (Ἀλιλάτ, i. e.,ʼal-ʼilat), which means "the goddess".[6] Apart from this isolated theonym, Arabic is first attested in an inscription in Qaryat al-Fāw (formerly Qaryat Dhat Kahil, near Sulayyil, Saudi Arabia) in the 1st century BC.[7][8] The oldest inscription in Classical Arabic dates to 328 AD and is known as the Namārah inscription, written in the Nabataean alphabet and named after the place where it was found in southern Syria in April 1901.[9]

With the spread of Islam, Classical Arabic became a prominent language of scholarship and religious devotion as the language of the Quran (at times even spreading faster than the religion).[3] Its relation to modern dialects is somewhat analogous to the relationship of Vulgar Latin to the Romance languages or of Old Spanish to modern Spanish dialects or of Middle Chinese to modern varieties of Chinese.

Classical Arabic is one of the Semitic languages, and therefore has many similarities in conjugation and pronunciation to Assyrian, Hebrew, Akkadian, Aramaic, and Amharic. Like all Semitic languages, it has nonconcatenative morphology.

These words all have some relationship with writing, and all of them contain the three consonants KTB. This group of consonants k-t-b is called a root. Grammarians assume that this root carries a basic meaning of writing, which encompasses all objects or actions involving writing, and so, therefore, all the above words are regarded as modified forms of this root, and are "obtained" or "derived" in some way from it. 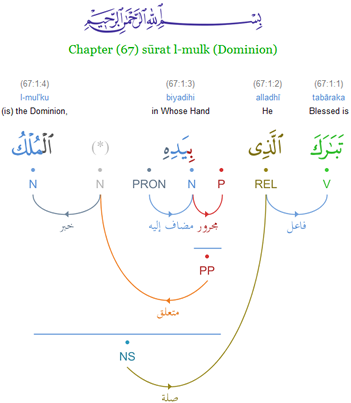 Classical Arabic had three pairs of long and short vowels: /a/, /i/, and /u/. The following table illustrates this:

^1 Sibawayh described the consonant ⟨ط⟩ as voiced, but some modern linguists cast doubt upon this testimony.[13]
^2 Non-emphatic /s/ may have actually been [ʃ],[14] shifting forward in the mouth before or simultaneously with the fronting of the palatals (see below).
^3 As it derives from Proto-Semitic *g, /ɟ/ may have been a palatalized velar: /ɡʲ/.
^4 /l/ is emphatic ([ɫ]) only in /ʔaɫɫɑːh/, the name of God, i.e. Allah,[15] except after /i/ or /iː/ when it is unemphatic: bismi l-lāhi /bismillaːhi/ ('in the name of God').
^5 /ɾˠ/ (velarized) is pronounced without velarization before /i/: [ɾ].

There are a number of phonetic changes between Classical Arabic and modern Arabic dialects. These include:[17]

Quran reciters still preserve the Classical Arabic pronunciation of the above letters.

The language of Classical Arabic is essentially that of the so-called poetic koine of the pre-Islamic poets, a standardized prestige dialect based on conservative Bedouin dialects of the eastern Arabian peninsula. A similar but slightly different koine had been adopted in Mecca, in a form adapted somewhat to the phonology of the spoken Meccan dialect of the time, and it was in this form that the Quran was given. The Quran was later rephonemicized into the standard poetic koine. Two of the differences between these dialects are represented in the modern Arabic writing system:

A variety of special symbols exist in the Classical Arabic of the Quran that are usually absent in most written forms of Arabic. Many of these serve as aids for readers attempting to accurately pronounce the Classical Arabic found in the Quran. They may also indicate prostrations (sujud), surahs, ayahs, or the ends of sections (rubʻ al-ḥizb).